Diné mountain biker gets the lead out in high-altitude race

Ten years ago, Randy John never imagined he would be competing in one of the world’s most challenging bicycle races. He was barely dragging his 305-pound frame around.

He has an angry health care professional to thank. 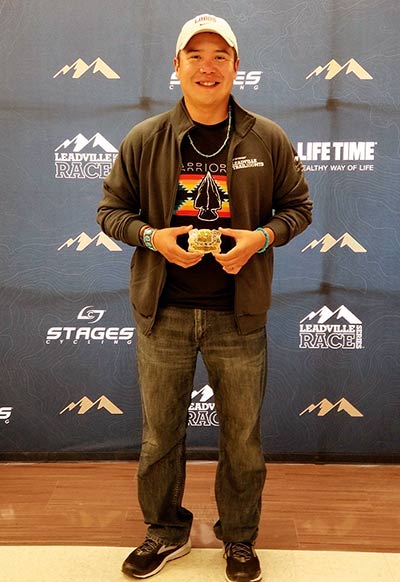 Randy John of Albuquerque shows off the belt buckle he received for finishing the grueling Leadville Trail 100 mountain bike race in under 12 hours. He’s going for the even larger 9-hour buckle next year.

Ten years ago, at the age of 27, John was at the Shiprock IHS getting checked out when the provider weighed him and let loose.

“He literally let me have it,” recalled John, who is Tl’ogi born for Ashiihi. “He was swearing at me. He said, ‘You’re still young, you can change your lifestyle!’”

Some folks might have shaken off the admonition, but John was unnerved enough that he went home and bought a pair of running shoes. A South African friend who later became his business partner, Likhaya Deial, advised him to run for 30 seconds and walk for four minutes, then repeat the process until he was tired.

“The next thing I knew, I was jogging for four minutes and walking 30 seconds,” John recalled.

Eventually he started entering 5Ks, then half-marathons and finally the Shiprock Marathon. But he was still chunkier than he would have liked.

“I thought about my ancestors and what they ate,” recalled John. “I went home and threw out everything in my pantry that was processed.”

These days, he lives mostly on chicken, rice and vegetables. He doesn’t drink anything except water, tea and coffee.

In 2010, John’s cousin came back to the Four Corners after living in Wyoming. He had a mountain bike in tow.

“He said, ‘Dude, it’s like being a kid again,’” when John asked him about mountain biking. “’Remember when we used to ride our bikes all over the trails?’”

Mixing up his workout routine between running and bicycling melted off the extra pounds even more. “I broke 199 (pounds) two months later,” John said.

About that time, John saw the 2009 documentary “Race Across the Sky,” which followed celebrity cyclist Lance Armstrong as he entered the grueling Leadville Trail 100, which goes from the town of Leadville, Colorado (elevation 10,151) up a dirt road to a remote mine above timberline and back. Armstrong ended up winning the race and setting a course record.

Entry in the Leadville 100, which started in 1983 with a paltry 45 riders, boomed after the documentary came out. John’s application was one of more than 60,000 to be placed in the annual lottery for the race, which limits participation to 1,650. The only way to circumvent the lottery is to have competed in the race before, or in the Tour de France.

John got the official rejection letter, and immediately put his application in for the following year. He did the same thing the year after that, and the one after that. All the while he was training, competing, buying better gear, and becoming a more polished cyclist.

Eventually he got noticed by Specialized Bicycles and a local Albuquerque bike shop and is now sponsored. He got Specialized to donate 23 bicycles to Ramah Navajo, where they are available for rent, and when he gets a new bike, he donates his old one to a homeless person so he can get around.

He also started his own cycling team, Warrior Up, and a side gig designing athletic gear.

Finally, this year — nine years after his first try at the Leadville 100 lottery — he got in. John could hardly believe his eyes as he read the letter.

“I was like a kid being told he could go to Disneyland,” John recalled.

He started seriously training in January.

“We’re lucky here because in Phoenix, December to April is mountain bike season,” John said. His friend and fellow fitness buff James June helped him find and register for three 40-mile races in the Valley.

“I didn’t worry about how fast I went,” John said. “It was just a matter of staying in the saddle, dealing with the elements.”

When it warmed up in Albuquerque, where John lives and works as a health advocate in addition to his athletic wear business, he switched to training at altitude. He would start at his house at 6,000 feet, then head to Bernalillo and then to the top of Sandia Peak, 10,678 feet.

He worried that it still wasn’t nearly as high as much of the Leadville race. Then a cyclist friend told him that very hot air is almost as thin as high-altitude air. This was encouraging.
“By the time I hit Mile 50 or 60 on my practice rides, it was usually about 1 p.m.,” John said. “One time it was 106 degrees.”

On the weekends, John spent anywhere from five to nine hours in the saddle. At least three times a week, he rode his bike the 13 miles to work and back.

I’m glad my boss lets me come in sweaty and change,” he laughed.

John was feeling pretty pumped until he went to the pre-race meeting in Leadville’s Lake County High School gym. There he was, one of only two Natives he knew of (the other being one of his Albuquerque cycling buddies), surrounded by 1,638 of the most elite mountain bikers in the world.

He had talked to race founders Ken Chlouber and Merilee Maupin earlier, and they said they were unaware of any Diné having competed in the race before.

“I told them I had tried to get into this race for nine years,” John recalled. “Merilee said, ‘Bless your heart!’ Ken said, ‘This is your land. It’s an honor to have you here.’”

The belt buckles that are the traditional prizes for the race are “big as dinner plates, and people actually wear them,” John said. “There was this bilagáana dude in shorts and a cowboy hat with this HUGE buckle. He said it was the 20-year buckle. This was going to be his twenty-second Leadville 100.

“I was intimidated,” John admitted.

Nevertheless, there he was. And he at least had a plan.

As a newbie, John knew he would be in the last corral, or starting group — behind 1,600 people, tire to tire on a narrow dirt road. The race started at 6:30 a.m. and if you don’t make the first 40 miles by 10:30, volunteers come out and unceremoniously snip off your bib and wristband.

“They have to do that,” John explained. “They can’t have people stuck out there overnight at 12,000 feet.”

John was determined to at least make the first cut. He stuffed all the pockets in his marathoner’s vest with gel packs, and told himself he wouldn’t stop at a checkpoint for food until he was halfway through the race.

The strategy worked. John made the 40-mile mark with 48 minutes to spare. Unfortunately, his friend, the only other Navajo in the race, was one of the 350 cyclists who didn’t make the cut and had to drop out, leaving John, as far as anybody could remember, the first full-blooded Navajo to complete the Leadville 100 — if he finished by the 30-hour time limit, which more than half the field generally doesn’t.

After the first 20 miles, the field had started to thin out. John passed a lot of riders — by the end of the race, he figured it was 746 — and started to think he not only was going to make it, he might be one of the lucky 33 percent or so who finish in under 12 hours and get one of those coveted buckles.

He tried to relax by pretending he was back at sheep camp, riding his old dirt bike on the livestock trails.

At the halfway point, way above timberline, John let himself stop at the checkpoint to eat. He downed some soup, a Coke and some cookies and was on his way again.

“Once I was on my way down, it hit me that I was going to make it,” he said. Fans lined up along the race route were timing everybody. “You’re going to get that buckle!” they shouted as he sped by.

The race cruelly ends on an uphill, a climb so steep most cyclists have to walk their bikes the last few miles.

“The last climb is long,” John said. “But once you’re over the crest of the dirt road, you see the high school and then you see downtown. The end is in sight.”

John is proud to say he biked the entire 103 miles except for the last two.

As John pushed his bike toward the finish line, he heard the announcer recount the story of how John had lost almost 150 pounds to become a bike racer. The crowd erupted in applause.

“I found my mom and gave her a high five,” John recalled. “Merilee saw me and said, ‘Randy, you did it!’ I was amazed she remembered my name.”

John’s friends gathered around, asking him, “Are you OK?”

“I honestly was,” said John. “I wasn’t even sore or anything.”

Next year, he’s going after the even bigger and more garish nine-hour buckle. Although he’s 37 this year, he says his times just keep getting better. He’s also hoping to make the cut for the Boston Marathon, and bring his parents, former marathon runners, to the race they had always wanted to run.

He has another goal too: to bring more Navajo cyclists to Leadville.

“I don’t know if he was joking or not, but Ken said, ‘Keep in touch. I may be able to reserve five spots for Navajos next year,” John recalled.