It was a series of matches for the youth of all ages.

Earlier this month, the 16U Lobo Summer Tennis Classic occurred at the UNM Lobo Tennis Club in Albuquerque.

Some of the participating athletes were Farmington youngsters Marley Deswood and Naomi Beck, who won the girls’ 16-and-under category doubles.

“Overall, I did really good,” Beck said. “I played really hard out there, and it was very hot outside, so I definitely gave it my best out in the heat.

“And it was just great to be playing,” she said. “I feel really great about it. It was a lot of fun to play in the tournament, especially with my new doubles partner. And it was just a great experience for both of us to play in a tournament together.” 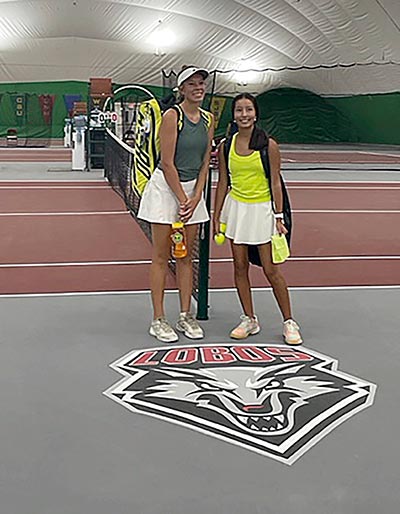 Courtesy Photo | Naomi Beck
Naomi Beck (left) poses with doubles partner Marley Deswood during the 16U Lobo Summer Tennis Classic. The pair captured the doubles title and they are teammates on the Farmington High tennis team.

Both Deswood and Beck are part of the Farmington High Tennis team. Beck is 16, and Deswood is 13. Despite the age difference, Deswood has shown enough skill to warrant her to play at a high level.

Beck said she feels proud of her accomplishment, saying there was a lot of good competition and that they played in hot conditions. She kept her cool and was happy to win the double event with Deswood.

Beck made it to the semifinals in the girls’ 16-and-under event before being eliminated with a score of 6-3, but she said it was still a fun time.

Beck has been playing tennis for about six years, but this is her first time playing at the Lobo Classic.

“Tennis is definitely a mentally and physically challenging sport,” she said. “It’s just great to be playing a sport that you yourself have to be mentally prepared for. It’s definitely a good way to keep yourself calm and just keep you on track; it just teaches you to dig deep and just not give up.”

Tennis has taught Beck patience and to work through the match like one would with any other problem, and it also leads one to be confident and honest.

She said there aren’t many Navajos or other Natives playing in the tournament, but she still encourages others to try it. If anything, it opens them up to meeting new people and forming new friendships.

Deswood was one of her teammates, and they agreed to play together in the doubles event. And for Beck, it was great playing with someone she could rely on.

“Playing with Marley was it was a lot of fun,” Beck said. “Me and her both got along very well. And it was good to me playing with somebody that I’m familiar with. 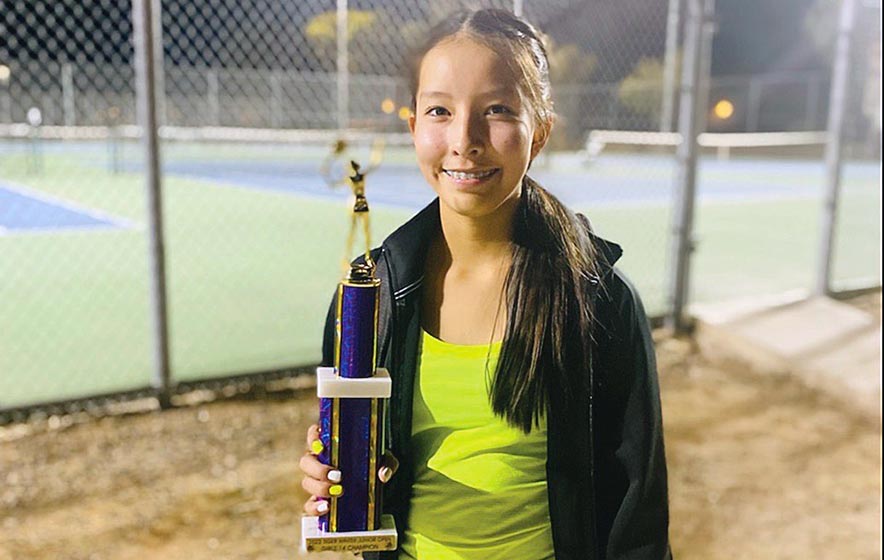 Courtesy Photo | Marley Deswood
Marley Deswood played in the UNM Lobos Tennis Club during the 16U Lobo Summer Tennis Classic in early June. She won both the singles and doubles event, teaming up with Naomi Beck in the latter event.

Marley Deswood may be young but is more than ready to play pro. She has developed a deep love for the sport, having already won six tournaments, playing in New Mexico, Arizona, and once in El Paso, Texas.

In the Classic tournament, she won the singles event for the 16-and-under category with a score of 6-2, avenging Beck by defeating the opponent that knocked her out in the semis.

“It feels good,” Deswood said. “It was a good win because the girl I played was actually like really good.

“She had a higher UTR (universal tennis ranking) than me, so that was a good one,” she added.

This was Deswood’s first time playing with Beck in doubles, and she enjoyed it. She’d usually play singles as that’s more challenging, but she’ll play doubles as long as she knows she can trust her partner as she does with Beck.

Deswood has been playing tennis since she was in the fifth grade and has played in school, clubs, and tournaments. She is currently ranked No. 3 in New Mexico for tennis on the website Tennis Recruiting Network.

She knows not many Navajos play the sport, so being able to go far and get these wins makes her seem unique.

“I think the reason why I’m so good at tennis is definitely because of my coach; I’ve learned everything from him,” she added.

Deswood’s family said they’re proud of Marley, pointing out how she is able to play with and against girls who are older and more experience than her. This past season, she made it to the state playoff with her partner, Natalie Sawyer.

The family thought this was a great sport for her, especially during the pandemic where athletes were able to maintain a safe distance and during the lockdowns Deswood used this time to practice.

They’re proud of her achievements and hope it will inspire other Native American youths to give tennis a try so that the Nation will have more representation in the realm of tennis.