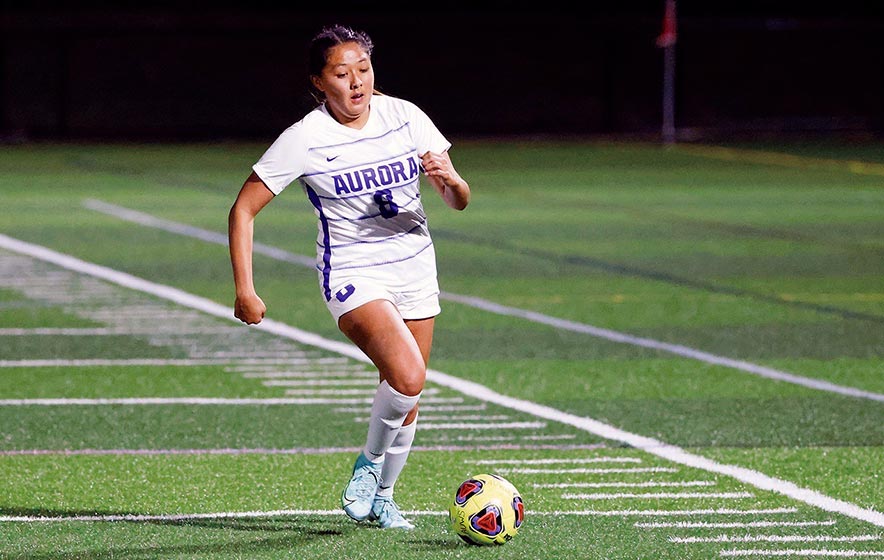 She’s been playing the sport since she was seven years old and, this past year, she completed her first season on the Aurora University women’s soccer team in Illinois.

Hesuse had quite an impact as she logged in the most minutes on the Spartan team with 1,293 minutes played, which included 15 starts.

“I essentially played every minute of every game,” said Hesuse, a 2021 graduate of Volcano Vista High in Albuquerque.

“I think that’s a big accomplishment, especially coming in as a freshman because not too many freshmen start,” she said. “I’m just really focused on making the most of every opportunity that I got.”

The Diné athlete is from Albuquerque and her parents are Adrian and Geraldine Hesuse. Her dad is originally from To’hajiilee and her mom is from Sanostee, New Mexico.

She has two older brothers, Jerrick Smith and Xyan Hesuse.

Fifth-year Spartan coach Shannon Sitch said Hesuse was one of the players that she did not take off the field.

“Aidyn has been awesome,” Sitch said. “Right when she got here, she’s led by example and what I like about her is she’s so versatile.

“She played quite bit of positions for us,” she added. “What I love about her is she doesn’t ask questions. You can put her anywhere and she’s says ‘Yes, coach.’ She works as hard as she can.”

In addition to the most minutes logged in, Sitch said her pupil led the team in points as she finished with five goals and one assist for 11 points.

“The great thing about Aidyn is she’s one of our most consistent players,” Sitch said. “You always know what you’re gonna get from Aidyn, and she’s always going to impact the game.

“She’s always going to do what you ask,” she said, “and for a freshman that’s always really hard to come by.”

At the end of last season, Sitch had a sit-down with Hesuse and they outlined what’s to come for the upcoming season.

“I kind of gave her a hard time and I was like, ‘Well, now you’ve set the bar really high,'” Sitch said. “She has some big expectations to fill for next year, and the great thing about her is we don’t feel we’ve come anywhere to reaching her full potential yet.

“She had a great year, but there’s still more in the tank for Aidyn,” she added. “That’s what’s so exciting – I don’t think we’ve seen the best version of her yet.”

Based on her contributions and managing skills, Hesuse was voted as team captain for this year’s upcoming season.

“That’s a testament to how the team feels about her,” Sitch said. “She’s one of those people that is driving the tempo in our practices and, you know, she really demands a lot out of her teammates.”

Being selected the team captain is what Hesuse is most proud of.

“I think being Indigenous, you don’t see that many players play college soccer – let alone lead the team,” she said. “I’m a person that is willing to push everyone, so I think that’s why I was voted captain.”

And although she got interest from programs like Eastern New Mexico, Iowa Wesleyan and Western Colorado, Hesuse said she wanted to experience something new as her reason to play for the Illinois school.

“Living in Albuquerque, I got to play in a ton of tournaments around the Southwest,” she said. “Some of them were in Colorado, and I chose Aurora so that I can be in a different area. And you know, the snow is crazy here.”

Hesuse was first featured in the Navajo Times when she attended Cottonwood Classical Preparatory School as an eighth grader.

That 2016 season, she placed eighth overall in the small school classification for cross-country and earned All-State accolades while helping her team to a Class A-2A state title.

She spent two years at Cottonwood before transferring to Volcano Vista to finish out her high school years. She switched school to play soccer since that sport was not offered at the Albuquerque private school.

“I remember all my club teammates would show their high-school medals and I was, like, ‘I wanna play high school soccer,’” Hesuse said, who played for the Rio Rapids club during the offseason.

Hesuse said they made state every season and during her junior year were the large school state champs.

It was through her club team that Sitch found Hesuse.

“I predominantly recruit the West Coast,” the Aurora coach said. “I’m out there, four or five times a year, so I saw her play in San Diego and then Las Vegas.”

“I watched her play for two years and we kind of developed a relationship in the recruiting process,” she added. “And I finally convinced her and her family to come out and visit and they loved it.”

Hesuse said she’s happy to be playing for Aurora University, but she had to make some adjustments, especially being over 1,000 miles away from home.

“It’s a different experience,” she said. “I had to figure out how to live independently. You know, coming from high school, and club, my parents were at every single game. It was hard to adjust not having that support system there, but I’ve managed.”

At Aurora, Hesuse is majoring in accounting and finance. Eventually, she wants to become a CPA and work for the FBI.

“I’ve always been kind of been nosy about, you know, my parent’s bills,” she said. “I like managing money, so I figured this was a good fit for me.

“I took one accounting class, and I just really liked it,” she said. “That is when I decided that was my major from there.”