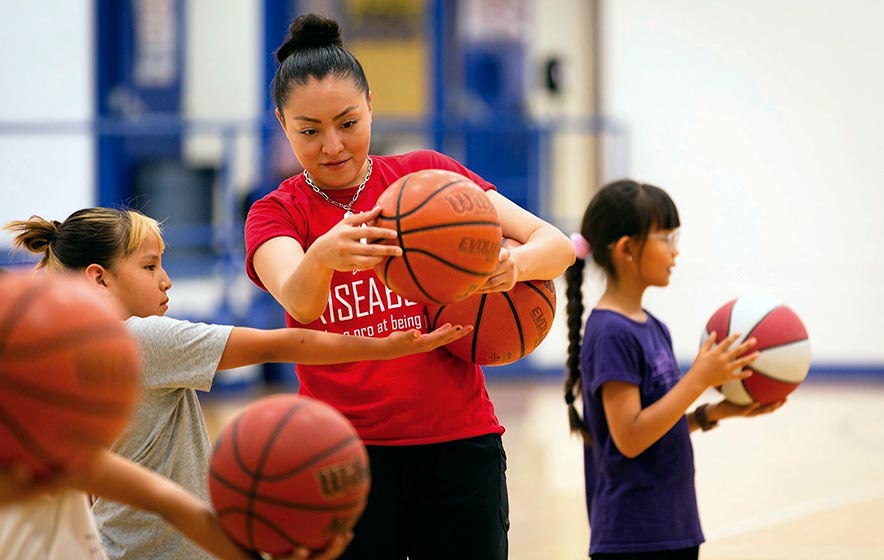 With a collegiate pedigree and a year of international experience, Analyss Benally lent her skills and knowledge to a group of young girls’ basketball players.

“I think it went well,” Benally said. “We did a station-based camp and we broke it down to many pieces emphasizing of footwork, shooting form, passing and stationary ball handling drills.

“They were all attentive, which I appreciate,” she added. “It looks like they’ve learned some things, and I’m pretty happy about that.”

Benally learned some of those basic skills at an early age when she lived in Shiprock before she moved to Wichita, Kansas, and trained under Ken Palmer, who was recently promoted as head girls’ basketball coach at Wichita Heights High.

Under Palmer’s tutelage, Benally mastered her fundamentals to become one of Wichita Heights biggest outside threats.

In her final two years, she averaged 12.2 points per game and helped her earn a scholarship on the San Jose State women’s team.

“What I learned at an early age was the fundamentals,” Benally said. “I had to master them because I’m a shooter, so I had to work on my footwork and shooting form.

“I had to master them because a lot of the girls I played with were much taller than me, so I knew I had to adjust by stepping out with my range and getting my shots off a lot quicker.”

Benally said hosting the camp near the Navajo Nation has been in the works for quite some time, as she worked with the newly hired girls basketball coaches at Bloomfield High.

Longtime coach Brady Rivers took over the program and he hired Analyss’ dad, Brian Benally, to be part of his coaching staff.

“My dad and I have been talking about me doing a camp, so that I can give back to the community,” Benally said. “We thought it’d be a good time to do it. And really, within the last few months we were able to organize it since they got the coaching job.

“We would have ran it much sooner, but we had it wait because we needed the gym space,” she added. “I’m grateful the Bloomfield Bobcats allowed us to come in and run it.”

Camp participant Aliya Quintana left the camp inspired as she hopes to follow the same path as Benally by earning a collegiate scholarship.

“It opened my eyes wider into what I want to do in the future,” Quintana said. “Just seeing how she got there, and the work she put in makes me more motivated to make myself better so that I can play at the next level.”

Quintana, who is originally from Dulce, said she learned a lot from the coaches as she is set to start her junior year in the fall.

“They helped with my shooting, and just fundamentals in general,” she said. “I think the camp also helped my mentality. It helped me get stronger mentally.”

“She taught us fundamentals, and other tips such as how to get pass a defender,” Danielle Johnson said. “She also helped us fix our shots a little bit and we tweaked it up.”

Of all the stations, Johnson said she liked the footwork session.

“It all starts with your base and your feet,” Johnson said. “You can’t play basketball without good footwork.”

Rivers, the camp director, said they had more girls signed up initially, but on Monday they had 40 girls attend the morning session and 35 in the afternoon.

“We’re pretty ecstatic about it,” Rivers said of the numbers.

“We had more registered, but I don’t think we would have been able to hold that much people,” he said. “The numbers we had was perfect for us and it was good to get the kids out here. We put up this camp to encourage them to come in and learn the fundamentals.”

Rivers thanked Benally for coming out and working with the local kids, considering her busy schedule.

“My summer is kind of hectic right now,” Benally said. “I’m still getting things in order, so I can’t run any more camps this summer.”

And although this is one-and-done camp, Benally is hoping to host two or three camps next summer.

Part of her busy schedule is working with Rise Above, a nonprofit co-founded by Jaci McCormack and Brad Meyers.

“It’s an organization that brings together Native youth,” Benally said.

McCormack, who grew up on the Nez Pierce reservation, played collegiately at Illinois State and through her foundation it seeks to improve the lives of Native youth through education, opportunity and sports.

“She wants to bring awareness to things like suicide preventions and to avoid things like drugs and alcohol while bringing kids into sports,” Benally said of the co-founder. “They offer free camps to tribal communities and I got to work a camp with Jaci in Spokane, Washington.”