The ‘next man up’ mentality has hit the Bloomfield football team. 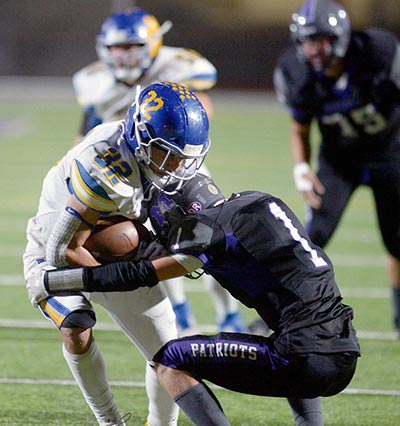 Navajo Times | Donovan Quintero
Bloomfield running back Diego Snell-Martinez (32) holds onto the ball while being tackled by a Miyamura defender. The Bobcats own a 5-1 record heading into Friday’s district opener against Shiprock.

The Bobcats were dealt with a slew of injuries in recent weeks, which includes starting quarterback Ryan Sharpe.

Sharpe got hurt on Sept. 17 in a road game against Miyamura. The Bloomfield junior injured his knee in the opening quarter as the Bobcats trailed 14-0.

Bloomfield, however, had others step up as they pulled out a 28-14 win. Sophomore Drew Perez played an important role in that comeback.

“He’s one of those targets you want to look for,” first-year Bobcat coach Mike Kovacs said of Perez. “He really got open and he made some critical catches when we needed him.”

With Sharpe still on the mend, the Bobcats suffered its first loss of the season when they came up short to Los Lunas Valencia on Sept. 24 in a 34-21 setback.

“As coaches we failed the kids to get them in the right spots to be successful,” Kovacs said. “The kids fought hard and we dropped some balls. I felt that it could have been a difference maker in the second half.”

Kovacs said his team “got smacked in the mouth” in that opening half against Valencia, a team that moved down a classification from 5A to 4A in this new realignment year.

“It tested our mettle a little bit,” he said. “We had to readjust and I thought as a coaching staff they did great but the loss ultimately falls on my shoulders. We didn’t do enough to have the young ones prepared.”

That loss put the Bobcats at 5-1 overall as they took a break last week with a bye.

“I think it did us some good,” he said. “I thought last week’s practice was really good during the bye. The kids understand their roles and they’re where they need to with Shiprock coming up on Friday.”

The game on Friday will commence the start of District 1-4A play as the Bobcats will play at Aztec on Oct. 15, host Gallup on Oct. 22 and they will entertain Kirtland Central on Oct. 29.

“It’s going to be a dogfight,” Kovacs said. “Our district is going to be tough and we always seem to get the best from everybody within our district.”

“Blake has done a great job,” the Bobcat coach said of his pupil. “He’s filled some great shoes and he’s done a tremendous job. He’s distributed the ball where he needs to and, you know, as a 14-year-old stepping in for your first varsity game your eyes are going to be a little wide open but, man, that kids has done a great job.

“Blake is one of those kids that has embraced his role and he took it on his shoulders and he said ‘Let’s go,’” he added. “For a true freshman I’m pretty excited to have that youngster on staff.”

Kovacs said Sharpe is getting better each day and they hope to have him when they play Aztec on Oct. 15.

“It just depends on how his rehabilitation is coming,” the Bloomfield coach said. “He’s getting better every day and so we’re playing it by ear.”

Before he got hurt, Kovacs said Sharpe was a big factor in some of their early games. The Bloomfield junior has thrived with the air raid offense the Bobcats employ.

“He’s been a factor in not only his passes but his running too,” Kovacs said.

The Bloomfield coach was equally impressed with the play of seniors Diego Snell-Martinez and Marc Armenta.

“When they get the ball in their hand, they’re going to contribute,” he said.

Kovacs said they picked up some new individuals this year that didn’t play last year. One of them is senior Matthias Deherrera.

“He’s our big time tight end, our inside slot and he makes critical catches at huge times in the game” Kovacs said. “He’s kept our drives alive sometimes.”

The Bloomfield coach said the air raid offense they run serves as an equalizer, especially to teams much bigger than them.

“It’s one of those offenses that you can be smaller, but you just got to learn where you need to be,” he said. “It really works. Look what we’ve done the last few seasons.”

Of course, Kovacs is referring to the last two state runner-up finishes in 2018 and 2019.

He’s trying to implement that scheme to his new crop of players, which includes a bevy of sophomores.

“They’re a scrappy bunch,” he said. “Every three, four years your going to get an new group, so this group is trying to find their own identity. We want them to continue what the ones before them have done and get back to that state championship game and hopefully we can get over that hurdle.”

Defensively, Kovacs said they use an “attack style defense.”

“We don’t sit back much,” he said. “We don’t have size but we do have speed. We really try to use our speed against our opponents and, you know, they’re just reckless abandonment. They’re on fire and they just attack the ball.”

Former Bobcat coach Bob Allcorn was the mastermind of that defensive scheme and Kovacs said they’ve been really successful using it.

“We’re continuing to use it,” he said. “We’re up front, in your face and we’ve done some great things. Eight of the 11 spots on defense are sophomores. They have risen to the occasion and they definitely have the heart of a lion. They go in there and fight. They do the best they can to slow down some of the teams we play.”