Mustangs pull away from Scouts in 3A North opener 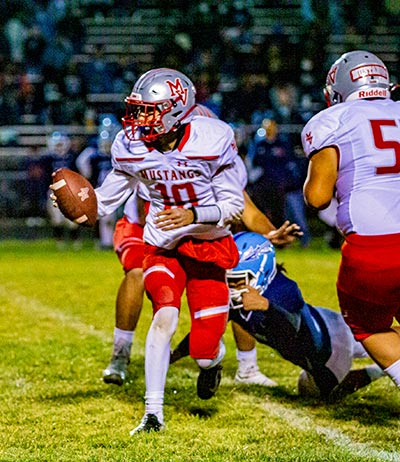 As the night became chilly, the game started out as anyone’s game with spectacular plays made in the first quarter, but eventually the Mustangs pulled ahead and won 40-12.

In the first quarter there were four turnovers and one interception made by Window Rock quarterback Taylor Begay. Begay had three incomplete passes, one of which was almost intercepted, but he had one successful pass to Caden Bia.

Begay also made the first touchdown of the game for the Scouts.

For the Mustangs they were able to tighten their defenses after the interception despite another interception attempt.

Mustang quarterback Andrew Sheppard had one incomplete pass and two complete passes, one of which was made to Stephen Hale who ran 10 yards and scored MV’s first touchdown. After the successful PAT, MV led 7 to 6 at the end of the first quarter.

Sheppard retaliated by making a pass to Albrandon Byjoe who ran 48 yards before being stopped just short of the endzone. Miraculously, the Scouts were able to hold the Mustangs back, keeping them just 1 yard from the endzone and forcing them back 3 yards before forcing a turnover.

In total, there were three turnovers and one fumble for MV that they were able to recover. Sheppard had seven incomplete passes, but he made three complete passes.

In turn, Begay had four incomplete passes, with one nearly being intercepted and one complete 10-yard pass. The first half ended with MV leading 13-12.

At the end of halftime, Monument Valley returned with more determination as they tighten their lines and their quarterback became more focused.

At kickoff, MV’s Cauy Betony caught the ball and ran 40 yards. The Mustangs changed up their strategy as they relied on Sheppard – and his passes – who got them within range of the Scout’s goal line.

Sheppard connected with Poorman for another score with MV leading 19 to 12.

The Mustangs later scored again when Shane Litsui made a running touchdown and after the two-point conversion MV jumped ahead 27-12.

The Scouts tried to pick up momentum as well with secondary quarterback Caden Bia passing the ball to Wayne Wilson, who ran 70 yards and brought the team close to the goal line. However, on the next play, the Mustangs stopped that drive with Stephen Hale intercepting a pass from Bia and MV gained possession as the third quarter ended.

Sheppard threw three incomplete passes, five complete passes and ran the ball 30 yards. The quarter had two turnovers and one interception made by MV. Bia threw two complete passes, but was also sacked during a play, ending the third quarter with 27 to 12 for MV.

In the final quarter, Window Rock forced a turnover and pushed the Mustangs back to the 4-yard line. However, they couldn’t break through the defenses as the Mustangs forced their own turnover.

The Mustangs made it back to the Scout’s end zone where Poorman ran another touchdown, making the score 33-13.

The Scouts continued to fight before losing the ball in another turnover, but they were able to sack the Mustang quarterback. Still, the Mustangs were able to press on and Sheppard made a pass to Stephen Hale who ran one final touchdown and then made another point, brining the score to 40-12 for the Mustangs.

In the fourth quarter, there were three turnovers. Window Rock had a fumble but recovered the ball while MV had two fumbles that they also recovered.

Taylor had four incomplete passes and one completed pass. Sheppard made two successful passes, ran with the ball 27 yards and suffered one sack.

Monument Valley’s head football coach, Bryan Begay, said he is happy and proud of his team’s win. He admits his team started out a little flat in the first quarter and there were some missed opportunities they could have used. Overall, Bryan Begay believes they had a good offense starting in the second half.

“I am very proud of my team and how they handled adversity and how we overcame the first half,” Begay said. “We just got better as the game progressed.

“We have to come out focused, executing, winning the one-on-one battles and just playing quality all the way around,” he said. “Learning how to not doubt ourselves and continue playing.”

Begay thanks Window Rock coach Wilbur Begay Jr. for hosting the game, saying it felt great playing again after a year of absence because of the coronavirus pandemic.

Bryan Begay is looking forward to Monument Valley’s homecoming game, which will take place this Friday against Chinle.

Begay said he is confident that he and his team will have a good game.

Window Rock coach Wilbur Begay Jr. also thanks Bryan Begay for a good match and commends his own team for not giving up. He said this was their first game where they started out fast and made the first touchdown – not the usually slow and steady routine they go for. When they saw an opportunity in the Mustang’s formation, they took it.

The team is still young with many sophomores and juniors who missed a year of playing but Bryan Begay believes his team will improve. He assures that the team is determined and that they are going to give every one of their games their best shot.

“We got some confidence from this last game,” Bryan Begay said. “We’re confident going into Page. We have a good chance if we played defense like we did Friday night.”

As of Tuesday, the MV football team is ranked No.14 in Arizona and No. 1 in the 3A North Conference; this is the team’s fourth victory of the season.