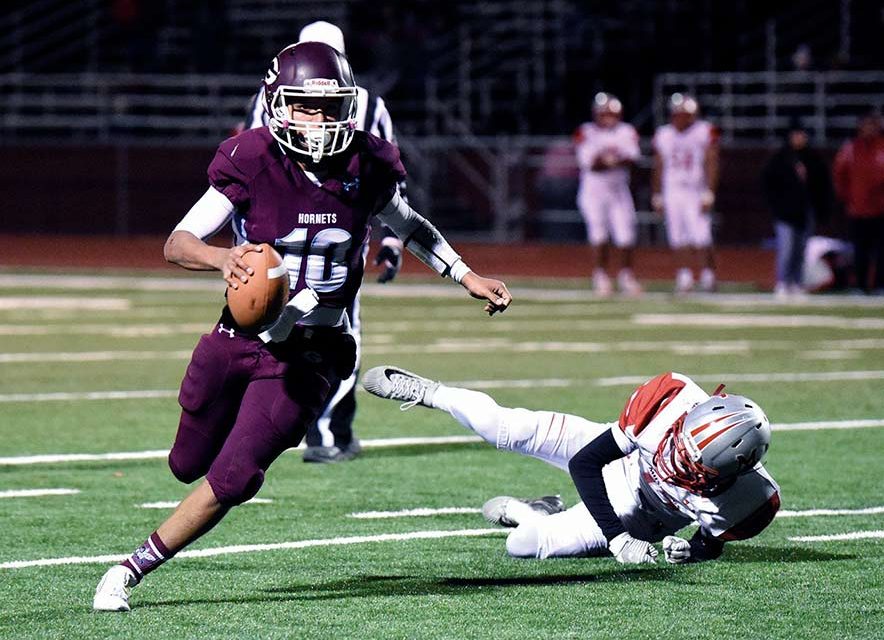 It was a tale of two halves and for the Ganado Hornets the first half made the difference.

Ganado jumped out to a 28-7 lead at halftime and held on for a 36-21 win over Monument Valley in a crucial 3A football game Friday night at Ganado High.

“Monument Valley gave us a challenge, and we knew they would, but we were prepared,” Ganado head coach Adriel Shirley said. “We knew after we beat Page that this was going to be a big game.”

Monument Valley had two crucial fumbles resulting in turnovers in the red zone that allowed the Hornets to pull ahead early in the game.

Elton Kirk scored two rushing touchdowns and threw for another pair in the first half as Ganado took control.

“Those Monument Valley fumbles really helped us out as our defense stepped up,” Shirley said.

Monument Valley’s only score came on a Brandon Byjoe 60-yard touchdown in the second quarter.

Down at the break, the Mustangs refused to go away, as they cut the game down to one score late in the third.

Alphonso Mike Jr. caught a pass from Byjoe in the third quarter, and then Byjoe had another 9-yard pass for a score to make it a 28-21 game headed into the fourth.

With less than five minutes left, Monument Valley again had the ball and was in the red zone, but a dropped pass in the end zone killed the drive and Ganado took over and scored in the closing minute to seal the win.

“Kudos to Ganado, they did a very good job,” Monument Valley head coach Brian M. Begay said. “Their players executed. They played hard back-to-back weeks against Page and us. But our biggest downfall were the fumbles. When you limit your opportunities like that you hurt yourself.”

Ganado (6-2, 4-0 district) will close out the regular season at home against Window Rock on Friday, while Monument Valley (5-4, 3-1) will host Page Friday night in their regular-season finale.

“I think we look good,” Shirley said, going into the final game of the season. “We worked all summer and told the kids if they work hard they will be where they need to be. All the kids work hard, and that is why we are where we are at.”