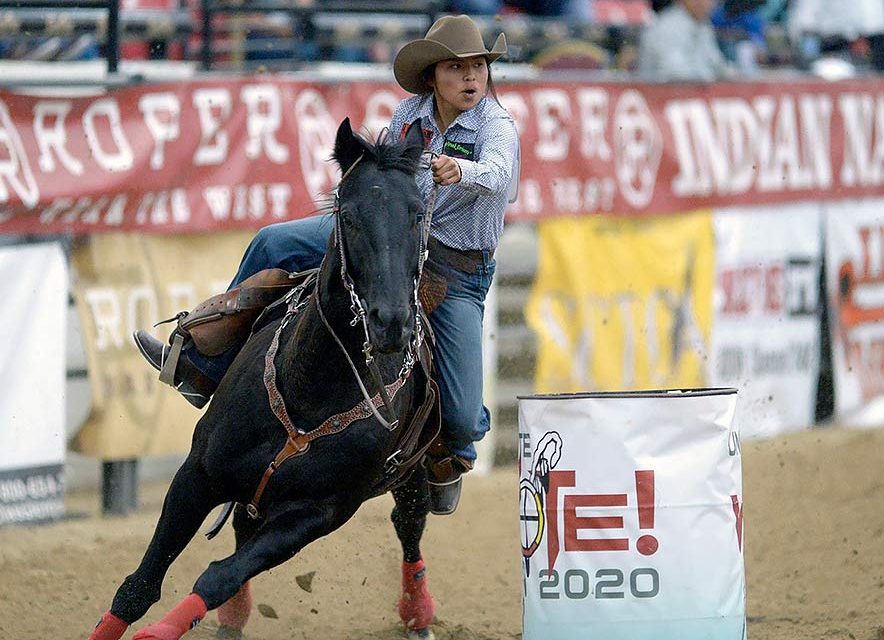 In a crowded field at the top, Tara Seaton and Kylie Gilbert shook things up with new horses in tow in the ladies barrel-racing competition at this year’s Indian National Finals Rodeo.

In Saturday night’s championship round, Seaton posted the rodeo’s fastest run of 14.707 seconds as she finished four runs with a 60.203 aggregate.

“I’m real shock with that time,” said Seaton, while noting that she’s been working with her new horse, Gypsy, since July.

Nevertheless, the Dilkon, Arizona, cowgirl said her treasured horse is quite familiar with the atmosphere at the South Point Equestrian Center, home of the INFR rodeo.

“I bought this horse from Kylie Gilbert so she’s been here plenty of times,” Seaton said of her horse. “She knows the scenery but when I was warming her up she was more feisty than usual. She kind of gave me some problems but I just kind of let her do her own thing.”

As the first barrel racer to compete in Saturday night’s performance, Seaton said she didn’t want to waste that opportunity.

“We were very lucky to draw the top of the ground tonight,” she said. “I just let her run her race and I was a patient jockey. I just sat in the saddle and she handled the rest.”

Before this year, Seaton said the last time she competed at the INFR was five years ago when she placed ninth overall, which was one spot short of earning a check in the average race.

“This year is a lot different,” she said. “I’ve been doing very well ever since I bought Gypsy. I’m just so proud that we were able to come together this quick.

“She’s my girl and she’s been very patient with me,” she added. “I’m just blessed to have her.”

After owning Gypsy for quite some time, Gilbert had a discussion with her immediate family and this past summer they decided to sell her to Seaton.

“I’ve had her since she was 3 years old and I love her but after awhile I was wanting to start another horse fresh,” Gilbert said. “It wasn’t hard for me to give her up because I knew Tara was going to take care of her. Obviously, she’s doing that because they’re doing really awesome this year.”

After Gypsy’s papers were signed over to Seaton, Gilbert made a 20-hour trip to the state of Washington with her grandmother to purchase Rogue, her current horse.

“We just love how she was bred,” Gilbert said of her five-year old mare. “We knew she has a lot of potential but with her being a baby I didn’t want to push her just yet.”

Gilbert said there were signs that Rogue was a bit green around the ears in her first INFR.

“We were really choppy in that first round and she kind of didn’t want to run,” the Kirtland, New Mexico, cowgirl said. “She was just looking around and after my first round we were sitting 11th. Since then we had to play catch up.”

In that first round, the pair produced a 15.382 run and as the week progressed they got better. They improved their time to 15.082 in the second round and in last Friday’s third performance they posted a 14.951 run, which placed them fifth in the round.

“This is probably the best I’ve ever done in the open,” Gilbert said. “I’m so happy that we finished in the top three.”

Gilbert said she’s a bit surprised with how well they have connected since she purchased Rogue. She said they found that connection within weeks of working together.

“It can take anywhere from a year to two for someone to bond with a horse that is not seasoned yet,” she said. “To see us grow together within those past few months is unbelievable. Going into the INFR we didn’t know what to expect. I’m just real proud of her, especially with the way she took everything in.”

Gilbert said she’s real excited about what the future holds for her new horse. She said the potential looks great and she’s looking forward to her development.

“This is a new beginning for us and honestly this past year has been humbling,” she said. “Before I had a chance to ride her I missed qualifying for nationals (high school) by just two points. Right now we’re leading the association in Arizona.

“We’re going to keep working and hopefully I can win the world title next year,” she added.