KC pulls away from Thoreau with 36-6 win 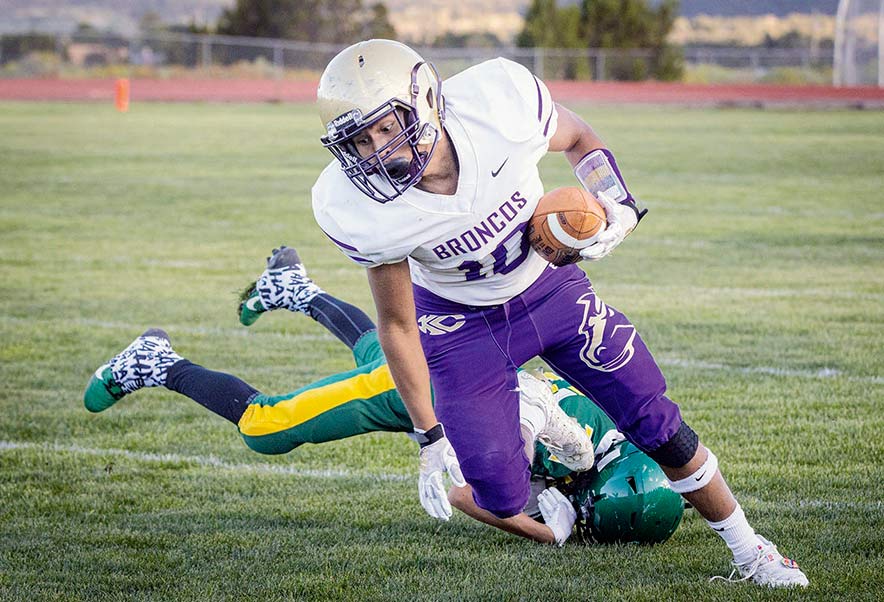 The Kirtland Central football team used its bye week to shore up some things.

The Broncos spent time going over film, and during practice they slowed things down to get reacquainted with some of the stuff they run as well as work on fundamentals.

That refresher paid dividends for KC as they improved its record to 1-1 last Thursday night with a 36-6 win over Thoreau.

“We really cleaned up a lot of things over these last two weeks,” first-year Broncos coach Travis Clary said. “One of things we identified was cleaning up our tackling and we instilled some football knowledge into the boys, understanding what’s going on with X’s and O’s and I think you saw some of that growth tonight.”

Most of that growth was exhibited following the opening quarter as KC led 7-6 going into the second.

The Broncos marched 56 yards on its first possession with junior running back Demusico Edsitty capping the drive with a 3-yard touchdown run that took only four plays to make.

The Hawks answered with a score of its own, going 75 yards. Junior quarterback Isaac Bear Eagle made a couple of receptions with his longest going 13 yards when he hooked up with junior wideout Elijah Trickey.

On the ground, Bear Eagle ran it three times, getting a much needed first down on a third-and-15 on a pair of runs.

In the final play of the series, he scored on a 2-yard TD run as they pulled within 7-6.

After that the Hawks had trouble moving the ball downfield as they lost some key starters to injuries.

The line of scrimmage was down two players when right tackle Isaiah Perry got injured and left tackle Jeremiah Pizano had to sit out as a precaution when he was inadvertently hit in the head.

“We came out firing, and we scored right away,” said Thoreau coach Erik Loera, whose team dropped to 2-1 overall. “Then we got guys cramping and we got some hurt and it started to spiral after that.

“We had to put in a lot of guys that were young kids, like our center,” he said. “You could tell the ball was being snapped over.”

With a young O-line, Bear Eagle was sacked six times.

“He had to scramble,” Loera said of his QB. “This is his first year playing as a quarterback, so he’s learning to scramble but he really didn’t have that much blocking tonight.

“They were there in the backfield as soon as he got the ball,” he added. “It was tough for him and he kind of got shaken up.”

Clary said they made some adjustments on both sides of the field, and they got that figured out just as the opening quarter came to a close.

The Broncos scored its second TD with 3:06 left in the half when junior Tyler Joe found Noah Dineyazhe for a 2-yard TD reception. That pass completed a 42-yard drive that took five plays.

After going three-and-out, the Hawks gave up a 68-yard punt return with 2:19 left.

The Broncos added a 43-yard field goal from senior Kyler Joe before the half for 23-6 cushion.

“In football, a lot of times you have possession battles,” Clary said. “We had to play that game, and we had to be smart with where we were at on the field. We were able to make the calls we needed to get in good positions to get those touchdowns.”

The visiting team tacked on two more scores in the second half with junior quarterback Andrew Telkamp capping a 55-yard drive with a six-yard TD reception to Chaske Taylor.

Sophomore Byrle Matthews ran in the final one-yard of a 57-yard drive late in the fourth for the 36-6 final score.

The Broncos finished with 325 yards total with Matthews and Edistty combining for 278 yards.

“Give credit to my boys and coaches,” Clary said. “They all stepped up and we made those necessary adjustments and we were able to pinpoint exactly what needed to happen.

“They put everything together and it showed,” he added. “It showed on the field of what we had to overcome and we fixed it, so kudos to them,”

Loera said he’s hoping to get some of his players back soon, but, in the meantime, he’s looking to give his younger kids more experience.

“They’re all young, and it’s my job to get them reps,” he said. “If you want to compete you gotta put the work in, and you gotta play smart.

“And with me, I gotta coach better,” he added.