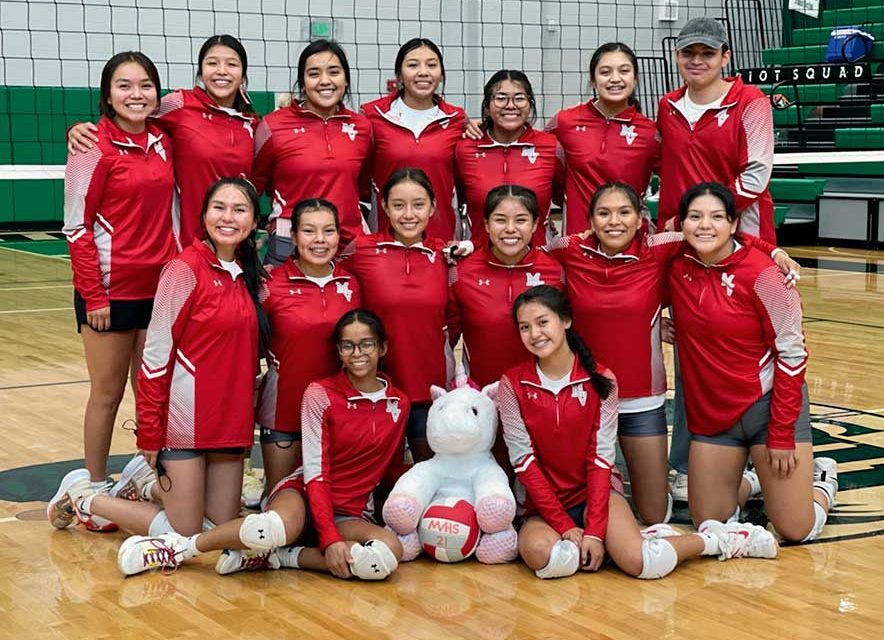 Courtesy photo | Rennell Gilmore
The Monument Valley Lady Mustangs pose for a picture after winning the Four Corners Honors Tourney on Sept. 3. The Mustangs defeated host Farmington in four sets for the title.

The annual Four Corners Honors Tourney got its name changed, and this year it was hosted by Farmington High.

In previous years, the tournament was held at nearby Piedra Vista.

Despite a few changes, the Monument Valley Lady Mustangs were up to the task of defending its title during the two-day tournament.

The Mustangs swept Aztec in the semifinals of the gold bracket, and in the finals, they beat the tournament host in four sets.

“Farmington is a really good team,” MV coach Rennell Gilmore said. “They were very good offensive-wise, so we knew we had to play our best, and the girls handled it well.

“They stayed calm, composed, and they got the job done,” she added.

The MV coach said they saw the Lady Scorps at two team camps over the summer, but they didn’t get to play each other.

“It was nice that we got to matchup with them,” she said. “They’re a very good team.”

And while winning the Farmington tournament has become synonymous with the MV program, Gilmore said they triumphed with a new lineup.

“We had a really big class of seniors last year, so this year we had a lot of underclassmen,” she said. “I just had to reassure them that we got to be ready for this tournament, and everybody wanted to see us play.

“They wanted to know how we are, knowing that we had a heavy senior class last year,” she added. “You know, they did really well. They held themselves throughout the tournament, and I’m really happy about that.”

And although her new group didn’t play a lot last season at the varsity level, Gilmore was adamant in not calling them inexperienced.

“Some of them played varsity last year,” she said. “They didn’t have that much playing time due to the big senior class that we had, but they’re all skilled players.

“The girls that played on the JV team last year are pretty good too,” she added.

Gilmore said the concept of reloading every year is ingrained in the MV culture, and she says her current group has some proud traditions to uphold.

“We just have to be ready for that,” she said. “I mean, we graduated a bunch of seniors, and now it’s their turn. I asked them what they want to do with this, and they’re taking advantage of it.

“They’re leaving their mark,” she added.

“Kaleilanamarie really stepped it up for us in that championship game,” Gilmore said. “She did a really good job at the net, as well as on defense. She actually goes all the way around for us.”

The MV coach said Dominguez did a good job with her role as the team’s libero.

“She does really well on defense and serve-receive,” she said of her pupil. “She helped us out by getting the ball to our setter (Denetsosie).

“Anytime we can get good passes with our serve-receive, it’s great for our setter,” she added.

MV has two more tournaments on tap for the regular season. They are headed to the Snowflake “Be Like Nat” Invitational on Sept. 16-17, and the following weekend they’ll are scheduled to play in the Epic Tourneys Volleyball Invite in Tempe, Arizona.

Regarding the 3A North Region, Gilmore said they would get everyone’s best as MV captured the league crown last season with a perfect record.

“Every team in our region is always good,” she said. “We just got to make sure that we stay in our game because any day somebody can beat us, no matter who they are.

“We all know our region teams, and so we always have to make sure we stay on our toes,” she added.

The ultimate goal, of course, is to contend for another state title. MV has won nine crowns, the last coming during the 2014 season in Gilmore’s second year at the helm.

“It’s hard to say anything right now, but as we get into these tournaments, we’ll see some a lot more teams,” Gilmore said. “Snowflake is always in the running, and some of the teams that go to the Epic tournament is also going to be at our state tournament.

“It’s going to give us a good look of what we can expect in November,” she said.