Tuba City football coach Vincent Lee believes his team has gotten over the proverbial hump after seeing his program take a few steps back due to missed opportunities this season.

“This win was huge for not only our program but for our community of Tuba City,” said Lee, whose team improved to 2-4 overall. “I think this is our signature win. I’ve asked people when the last time we beat a ranked team, and nobody could tell me.

“This is big for our kids because some of these young men have been working hard for four years, and their hard work is coming to fruition,” he added. “We had a rough start with some off-the-field stuff going on, but I’m extremely proud of these young men for coming together. It’s amazing how we were able to rebound.”

Lee said they’ve been in a couple of close games this season but fell short to Ganado and Hopi. That same scenario played out in his previous years at the helm.

“We’ve been in so many games at halftime,” he said. “We just didn’t execute to get it done. We’ve looked at all those losses as an opportunity to get better, and in this game, our seniors never faltered.”

“Alchesay wins a lot of their game with physicality, but our boys were just so determined to win this game,” he said. “We had a game plan. We knew what they were going to do.” 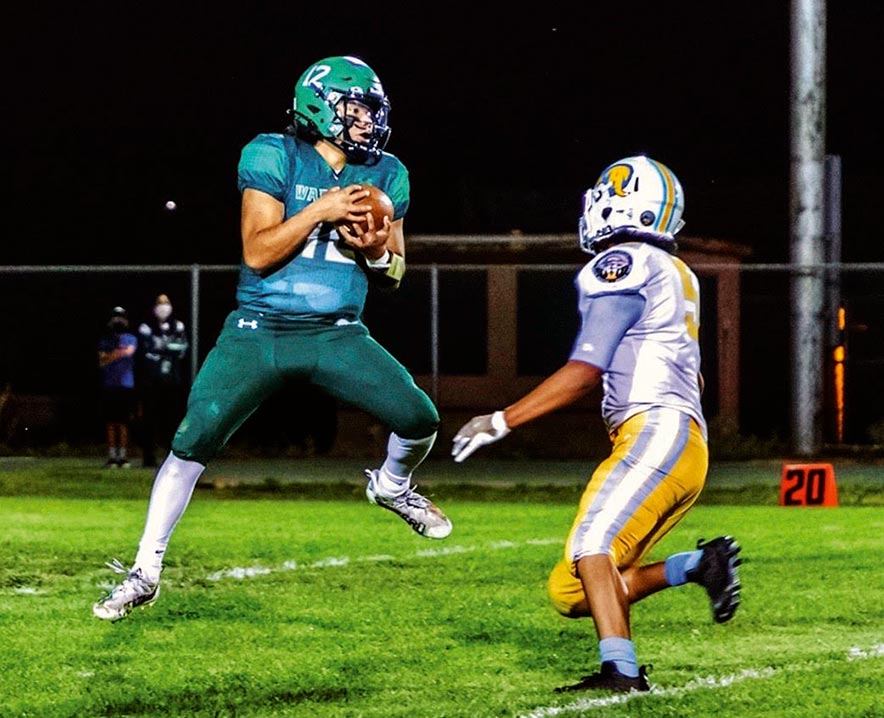 “They’re huge upfront, and they’re immaculate in running their offense,” he said of the visiting Falcons. “They’re great on execution, but our guys believed in the game plan we had.

“They just played possessed,” he added. “I mean, we had three goal line stands. This could have been a very different game, but we stopped them within the 5-yard line and denied them scores.”

Lee said those stoppages was a result of “playing with extreme heart and passion.”

“You know, nobody has ever questioned their hearts, but it’s always been about execution and the mistakes we’ve made throughout the seasons,” he said. “We’ve told them that if we play with our hearts and minds, we’re going to get things done.”

The Falcons finished the contest with 257 yards, with all of it coming on the ground. Senior quarterback Leon Fall rushed for 133 yards on 27 carriers with one TD. Junior running back Ty Gushoney had eight carries for 38 yards and one score.

“We knew he was their No. 1 athlete,” Lee said of Fall. “They like to run their offense through him, and he’s the guy that makes things happen.”

Lee felt that they had the personnel to withstand Alchesay’s double-wing offense.

“It was a matter of us making plays,” he said.

The Tuba City coach said they didn’t do anything different on the offense side of the ball.

“You know, all season long, we’ve had execution issues,” he said. “We have a young line, and they were still coming together, and our receiving group were still trying to figure things out.

“We just had a lot of mistakes, but we just kept coaching them,” he said.

“Our receivers really stepped up, and they made plays,” he said. “They did everything they were supposed to, but I think this game was about the maturation of our quarterback.

“He really stepped into that role, and he directed the offense,” he said of his pupil. “He made some huge throws, and they were just spot on. He’s been making great throws all season, but we weren’t converting those throws.

Bilagody had a hand in all of their scores, as he completed 13-of-26 passes for 231 yards.

He connected with Whiterock with six receptions for 151 yards and two TDs. He also completed one TD throw to Engle.

“His decision-making and his throws were spot on, and so I give him a lot of credit,” Lee said.

The signature win, Lee said, came at the right time as Tuba City is heading into 2A San Juan Region play, starting with Friday’s home game with Many Farms.

“I believe last week’s victory is getting us over the hump,” he said. “As a coaching staff, we believe in our kids, and we know they’re a good team. A lot of it was them believing in themselves.”

As for Friday’s game with Many Farms, Lee is expecting the Lobos to come out and give them fits.

“We don’t expect anything less from Many Farms,” he said. “They’re going to come out and give us 110 percent, so we have to be ready for that.”