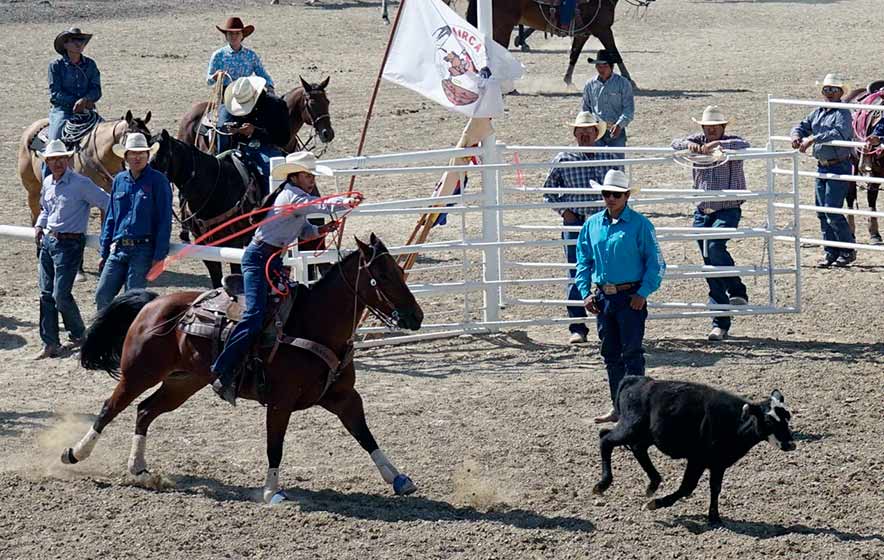 The Farmington cowboy turned in a pair of 11-second runs to win the average with a total time of 23.48 seconds.

“My first calf kind of got around me, but I still got by him,” said Mitchell, who is originally from Chinle. “And today, I dropped my slack, but other than that, I had some good calves.”

This was Mitchell’s second championship at the oldest fair on the Diné reservation. He won his first Shiprock Fair title in 2010 with Jeff Jim in the team roping. 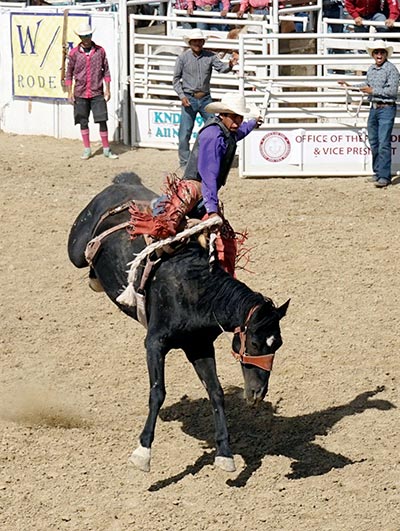 Navajo Times | Quentin Jodie
Arizona cowboy Shane Phillips attempts to ride his short round draw on Sunday afternoon at the 109th Annual Shiprock Northern Navajo Fair Rodeo. Despite being bucked off, Phillips won the aggregate title with the 76-point ride he made in the long go round.

Mitchell said he would use his latest win to generate momentum for the upcoming INFR Last Chance Qualifier on Oct. 14 and 15 in Las Vegas, with the top four non-qualifiers making the field.

“I’m trying to get the ball rolling before I head to the last chance rodeo to qualify for the INFR,” Mitchell said. “This is basically a confidence booster.”

Steer wrestling champion Rooster Yazzie is using that same notion in his quest to be an INFR world champion.

“It feels pretty good to win the oldest fair,” the Coyote Canyon, New Mexico, cowboy said. “I hope to keep the ball rolling.”

Yazzie took second in the long go with a 4.51 run and followed that up with a first-place effort of 4.44 seconds to win the average.

In the open team roping, Victor Begay won the title with his son-in-law, Aaron Tsinigine, as the pair roped two draws in 11.71 seconds.

“Like I said before, you can’t turn down your sons-in-law, so you can’t let them down,” Begay said.

The veteran team roper also made the short round with his grandson, James Arviso, but they produced a no time.

“The steer jumped out on my grandson to win the rodeo,” he said. “That’s how team roping goes sometimes.”

In the breakaway roping, local cowgirl Mia Wilson won her first ever Shiprock Fair in impressive fashion. She was one of three ropers to catch two calves as she posted two runs in 5.82 seconds.

“I didn’t see my calf run before, so I had to really watch my score,” the Shiprock cowgirl said. “I had to wait and see where he took that first step.”

Of the two draws she had, Wilson said the long go was the most challenging as the area got hit with a windstorm.

“It got pretty bad, so I knew I had to be aggressive with my roping,” she said.

In the bull riding, Dorien Henio rode 1-of-2 draws to win his first Shiprock Fair. He won the long go-round with an 82-point ride aboard “Painted Desert,” a W/A Rodeo bull.

“He was a really good bull,” Henio said. “He kicked out 1-2-3, and then he turned to left, and he stayed in that. It felt good, and I spurred him a couple of times.”

In the short round, he didn’t have that much luck as he was bucked off.

“He was a money bull, but I feel like I wasted him,” Henio said.

The Naschitti, New Mexico, cowboy said winning the Shiprock Fair has lit a fire under him. He wants to continue to work on his craft.

“I really don’t know what to say, but this is my first win, and it feels really good,” Henio said. “It really sparked something inside of me. I got tired of falling off, and I wanted to get better.

“The only way to get better was here,” he said. “The bulls were good; everything was good, and I felt good. I came out, and I tried my best, and I got it done.”

Henio said his idol, Cody Jesus, has been a big help in his latest endeavors.

“Without him, I wouldn’t be here,” said Henio, who also steer wrestles. “You know, I go to his house to practice on his bulls, and I’m getting a good feel of it.