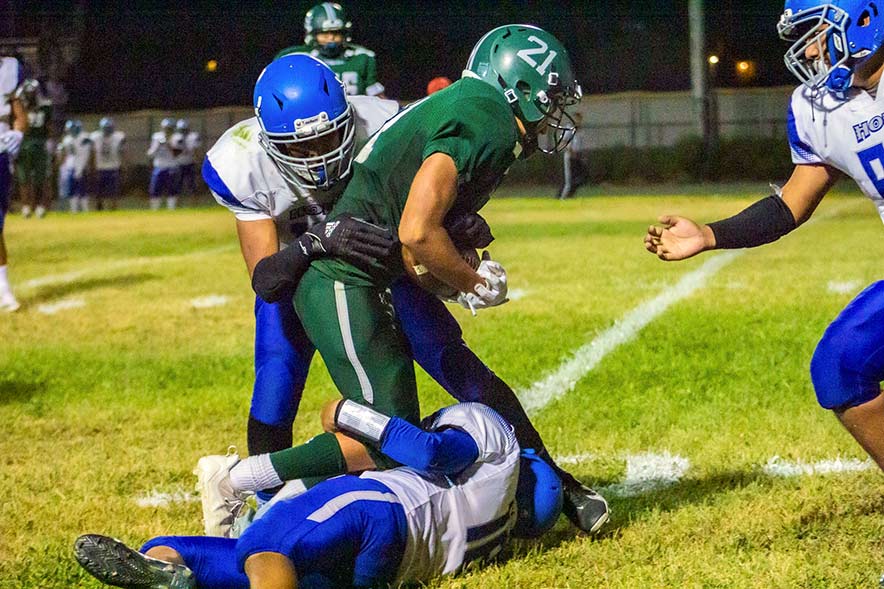 Friday night the Tuba City Warriors went up against Hopi’s Bruins in a football game at Tuba City High.

It was a rough game for the Bruins that kept pushing the Warriors and forcing them to keep their guards up, but it was ultimately a Tuba City win with 44 points to Hopi’s 0.

“Tonight, went great,” Tuba City coach Vincent Lee said last Friday night. “As a team we are growing and showing so much improvement, we were able to score a lot of points.

The last time the Warriors faced the Bruins was on this field — the Blue Canyon Memorial Stadium – nearly two years ago in 2019.

Both sides expressed gratitude and good cheer playing against each other again.

At the very start the Warriors showed they were ready. At first kick off, TC senior Levander Yazzie caught the ball, ran through the defenses and scored a touchdown in the first minute of the game.

Throughout the game, a lot of players made rushes, breaking through the defenses and sometimes making 20- to 50-yard runs before being stopped.

At one point the team had to take a step back when Hopi stepped up their defense and had to work its way around its blocks. Hopi was also probing its lines for breaks and tried to exploit the Warriors, nearly sacking Bilagody at one point. However, the team was able to adjust and continued to meet Hopi head on.

Hopi also made seven successful passes as its senior quarterback Curtis Talieje try to make passes over the aggressive Warriors. Talieje got sacked four times through the game, once while in their endzone. Still, Talieje persistent and rallied his team together, later making a 19-yard and a 25-yard dash. He also made a 20-yard pass to Charles Harris who just barely caught it with one hand.

Twice Bruins Jarious Lomayestewa made the only two interceptions of the game and boosted morale for both the Hopi team and fans.

However, they weren’t able to make a touchdown, making this Tuba City’s second win of the season.

Lee was proud of his team, noting that they already racked up over 90 points this season while in their 2019 season they only made about 80 points. Lee wants this to be Tuba City’s year, saying he and his team are aiming for gold this season.

Hopi put up a good fight and made it through without much injury. Still, their spirits remained high, as this is just the start of their season, noted Hopi coach Raleigh Namoki Jr.

“We have some young and inexperienced players,” Namoki said. “There is room for improvement and we hope to continue to improve week by week.

“Tackling was an issue tonight as well as blocking, but I know the kids will continue to work hard and improve,” Namoki said.

“We didn’t get to have a scrimmage at the beginning of the season so we are still figuring out where are players fit into the offense, defense and special teams’ unit,” Namoki added.