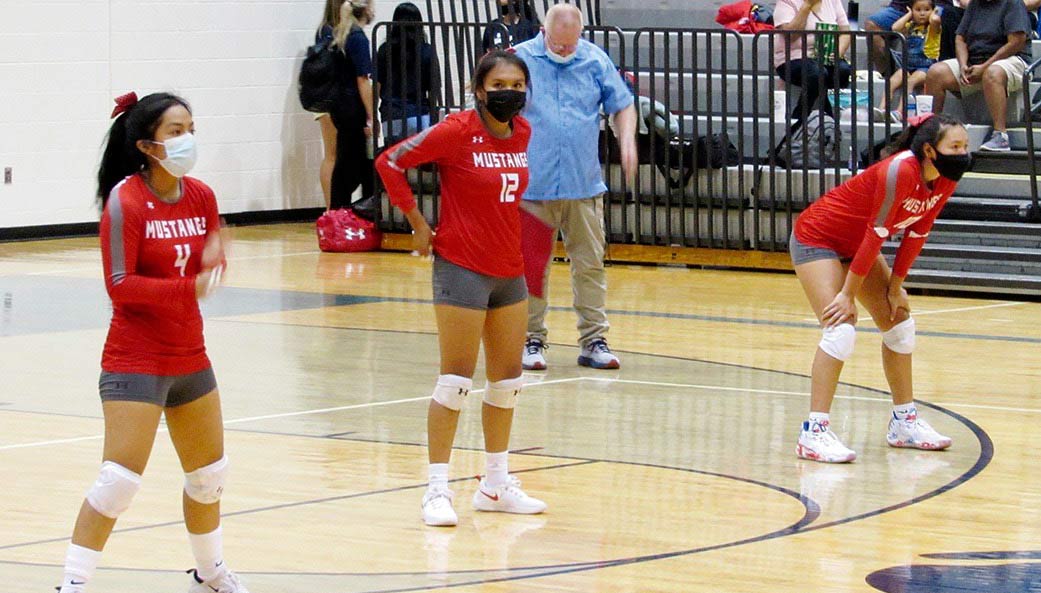 The pecking order at the Piedra Vista volleyball tournament remained the same.

Despite not playing for over 21 months, the Monument Valley Lady Mustangs repeated as champions on Saturday at the 12-team invite. (Because of the coronavirus pandemic, the PV tournament was not played last season.)

“This is nice,” MV coach Rennell Gilmore said. “We haven’t played in like a year and a half and, you know, a lot of people probably didn’t expect us to perform at this level.

“We just want to let them know that because we were off for a year and a half doesn’t mean that we weren’t putting in the work when we finally got a chance to be in the gym.”

In Saturday’s finale, the Mustangs picked apart Farmington’s defense as they won in straight sets to win the gold bracket.

“This means the Mustang program is still strong,” MV setter Melendy Harvey said. “It’s good that we won the tournament again because we were the defending champions. We made some mistakes but we got back up as a team and we finished together.”

“I think this is huge,” senior hitter Aiyanna Nash said. “It proves to us that we didn’t go anywhere even though we didn’t have a season last year. It definitely sets the tone in what we need to do for the rest of the season, and for what people expect from us.”

In the opening set, the two hitters combined for nine winners.

The Farmington squad matched those numbers between six players but they also tossed in eight errors to help MV’s cause.

Nonetheless, the Scorps were within striking distance as they trailed 14-13 thanks to a Mustang error and a nicely placed tip by junior middle blocker Ali Gillen.

MV, however, righted its ship by going on a 7-2 run with Nash putting down two kills while adding a stuff block for a 21-15 cushion.

Although the Scorps cut the margin to 22-19, MV closed out the set by scoring three of the last five points for a 25-21 win.

In the next set, Farmington gained an 11-8 following two successful aces by senior Kylie Goodluck.

But a Farmington error shifted the momentum as MV defensive specialist Reese Begay served across six consecutive points for a 15-11 cushion.

Picking up where they left off, the Mustangs surged ahead at 10-3 in the third but a slew of miscues allowed Farmington to climb back into the contest.

Thanks to those errors, the Scorps tied the game at 11-all but a service error by Farmington gave the Mustangs the serve back.

Maiava then came up with a huge block and the senior middle blocker added a pair of kills for a 15-11 cushion.

After trading side outs, the Scorps made one final push to get within 17-14 but the Mustangs put down six kills for a 23-15 advantage.

“We have errors like any other team but we were able to pull ourselves back together,” Gilmore said.

And while they faced some adversity, the MV coach said her team has a knack for overcoming them with mental toughness.

“We could have lost the momentum but the girls regrouped,” she said. “The mental toughness that they have will help us out, especially against some really tough opponents.”

Gilmore said the sky is the limit for her squad as she has a mixture of young and veteran players, which includes seven seniors.

“Our seniors have been playing with each other for quite some time,” she said. “It means a lot for them to be out there because they didn’t have a season last year.”

Like her teammates and coaches, MV senior Shree Yazzie is grateful that she’s able to don a Mustang uniform and represent her community.

“It feels great to get back on the court with my teammates,” she said. “We lost a whole season but I’m happy that we get to play.”