‘We’re willing to do whatever we have to’: Off-rez schools begin late football season 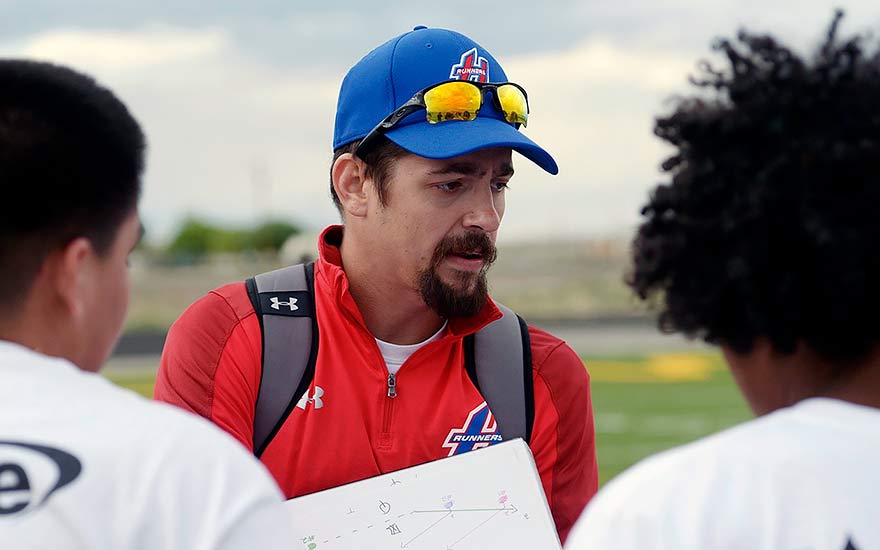 File photo
Holbrook football coach Christopher Starkey goes over plays with his players in this file photo last year. The second-year coach is doing what he can to get his kids to play despite new precaution measures set up by the Arizona Interscholastic Association and Centers for Disease Control and Prevention due to the ongoing coronavirus pandemic.

During a typical year, high school football teams would be having their fourth or fifth week of the season by now. However, thanks to the COVID-19 pandemic, schools are having delayed seasons, if any.

In addition to the changed schedule, the teams have to follow many new precautions set up by the Arizona Interscholastic Association and Centers for Disease Control and Prevention as listed by head football coach Christopher Starkey of Holbrook High.

“Temperature checks, our daily questionnaires of ‘Have you been exposed to anybody?’, ‘Do you have any symptoms?’ and synchromatic locker room usage, so we have them go in five … at a time to get dressed, come out, and then we send another group of five kids in,” Starkey said. “So, there’s a lot of things like that that we’re having to deal with right now.”

Starkey also explained they have new sanitation regulations, making it difficult to schedule training as it takes time for him to disinfect the locker rooms, equipment, and other surfaces the team may come into contact with. While most practices end at 6:30 pm, he doesn’t go home until 7:30 as it takes him a whole extra hour to make sure everything is clean for his team.

According to Starkey, Holbrook football and other extracurricular activities are suffering from a lack of numbers. A majority of Holbrook students come from the Navajo Nation, but with it being hit hard by the virus, many students have opted to stay home, which Starkey completely understands.

“I had an individual on my team who lost a brother, cousin, and uncle all in the same week, and that family pretty much decided that they will not be participating in sports this year,” Starkey said.

The same procedures are being followed by Brandon Guzman, head football coach at Winslow High School. It’s taking some time getting used to the new procedures, but Guzman does everything he can to keep his players safe.

“It’s taking some learning for the kids to learn and to develop,” Guzman said. “But then 15-year-old to 16-year-old kids will forget sometimes, so I’m kind of playing mom and dad at the same time; reminding kids to do things right — Wear their masks and bring their own water. So, it’s a learning experience. Hopefully, we don’t have to do this next year. Hopefully, everything is normal, but I don’t know what the new normal will be.”

Another difference this year is the AIA will be planning much of the season for them. Guzman said traditionally they could easily arrange games between schools through their athletic directors, but with so many schools either having a delayed season or no season at all, the AIA will have to schedule their games for them. This year, Holbrook moved down a classification to the 2A Salt conference while Winslow remains a member of the 3A East.

Many different scenarios are being played out across the globe with the virus affecting many events, but both coaches are determined to let their kids play.

“It’s not difficult: Our kids want to play, and we want them to play, so we’re willing to do whatever we have to do,” Starkey said. “It’s just a little bit more frustrating having to worry about those things opposed to a normal year where we would say, ‘Hey, let’s just make sure that we’re teaching things safe,’ planning our next game, practicing football and not having to worry about all the COVID-like distractions.”

Both schools also have a fresh varsity team to work with. Guzman said they lost 25 varsity members; 20 were seniors while the other five chose not to play for saftey reasons. The same goes for Holbrook. Although having so many new faces isn’t a problem for them, the coaches wished they had more time to get to know the players. They didn’t have their summer training camps and only had a few weeks to practice together before starting their modified season.

There is also another threat that both coaches have encountered, and they fear it may be just as dangerous as the COVID-19 virus, and that is declining mental health. Both coaches described how football and extracurricular activities, in general, help to build a young adult’s social skills, especially in a rural environment like the Navajo Nation.

Because of the pandemic, a group of friends can no longer meet together. Coaches cannot train their students and teach them valuable lessons in both sports and life. The forced isolation has left many student-athletes on their own dealing with the trauma that the COVID pandemic wrought upon them and their families.

“I’ve been getting text messages from them in the middle of the night [or] getting phone calls from them in the middle of the night, because they just needed to talk or just needed some advice,” Starkey said. “These kids, a lot of them in Holbrook especially, are looking for a better future, something other than what they grew up in. There’s nothing wrong with that; football is the ultimate vehicle. It provides an outlet for so many different things. And for the same point, I told my kids they have so much more to offer to the world than just being football players.”

Guzman has been monitoring the health of the community as they prepare for the opening season. Although he is happy that COVID cases are down, he is very concerned about the high rate of suicide.

“Now if we start football in school and there’s a big outbreak, maybe we made a mistake. But right now, with the numbers continuing to be down, from what I’ve been reading, and from seeing the mental health aspect of my kids, seeing how happy they are, and hopefully, we change those suicide stats too because I know suicide has spiked tremendously from talking with doctors and I don’t want that, so I think mental health outweighs the coronavirus right now, in my personal opinion,” Guzman said.

John O’Brien is a Holbrook senior and is on the school football team. He has been playing the sport for as long as he can remember and has been on varsity for all four years of high school.

“I feel like we’re way further ahead than last year, so I think we’ll do so much better and hopefully win some games,” O’Brien said. “Everyone so far has been there every day, and there have been very few mistakes.”

O’Brien and his team follow all the precautions set forth for them. They treat the pandemic as a real threat and don’t mess around. They do the temperature checks, wear a mask whenever they’re not wearing their football helmets, and try to maintain safe social distances. “Our water bottles even have to stay six feet apart,” he said.

It was difficult at first getting used to the new procedures as well as the new school schedule, but O’Brien said it was worth it.

“The classes are harder than when we were just going online,” O’Brien said. “But now we can go to school two days a week, so that’s been very beneficial to me and my guys, I think. It’s been a whole lot easier.”

Although disappointed that the modified game schedule will only have them play six games, he is glad that they get to play at all. For him, football gives him something to strive for, to be better at, a semblance that helps him in academics.

“I want to play because it’s the greatest team sport,” O’Brien said. “We have to all work together, and we have to be in the same mindset, we have to know exactly what to do, or else it won’t work. In other sports, you can kind of do things on your own and not have such bad consequences, but in football, you’re a team, and you have to be a team. You can’t just go out there and put 11 guys on the field and expect them to win. You have to be a team; build connections and bonds to be able to win.”

Although COVID is a genuine threat, Starkey doesn’t want it to beat his team, nor does he want it to make them feel limited.

“I completely understand how serious it is. It affected my family, it’s affected families around me, it’s affected families in my community. But I know a lot of other things that have affected those same families and other families, and we haven’t used those as things to stop us from living our normal lives. Football is one of the most important things in our community. These kids need it, they thrive for it, and it provides a sense of structure for a lot of them that they don’t get when they’re not here. ”