For the past three months Summer Secatero had her sights set on playing golf collegiately at Mesalands Community College. 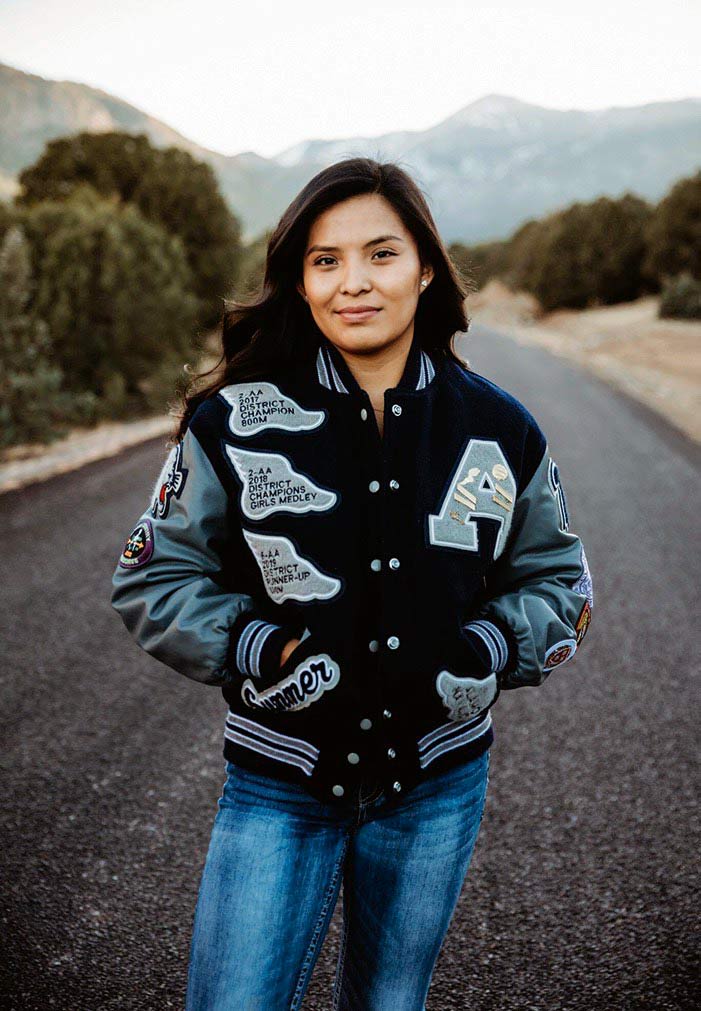 Submitted
After signing a golf scholarship to play for Mesalands Community College, Alamo Navajo senior Summer Secatero went in a different direction as she is scheduled to ship out on June 30 after she joined the U.S. Navy.

The Alamo Navajo grad signed her letter of intent on Feb. 20 to attend the Tucumcari, New Mexico, school even though she hadn’t played the game for almost four years.

“I was extremely surprised that I still had a natural swing, even though it has been that many years since I’ve picked up a club,” she said.

Summer is the daughter of Craig and Jennifer Secatero. She has two siblings, older sister Candis and younger sister Keona.

The 17-year-old hadn’t plan on earning a golf scholarship but when she went to a college fair expo in Socorro she saw that MCC had started a program.

“That was something that caught my attention,” she said, while noting that she had planned on earning a degree in social work.

“I’m honored to receive this scholarship but I decided to go in a different direction,” Secatero said. “This is a great opportunity and it shows that my hard work and determination really paid off.”

Instead of heading to MCC in the summer, Secatero has enlisted with the U.S. Navy and she is scheduled to ship out on June 30 after she swore her oath last Thursday.

“Playing golf was what I had planned to do but the thing that won over my heart was the opportunity to go travel,” she said. “It was something I had to think hard about but I couldn’t pass that opportunity up.”

Her mom, Jennifer, was initially excited that her daughter signed with MCC but once Summer enlisted she supported her decision.

“That was a huge surprise for me,” she said. “She really wanted to play collegiate golf but some of the conversations we’ve had she started to really like the military life.

“She wanted to travel the world and be more successful and that is what the Navy offered,” she said. “I’m very proud of her decision and it’s something she wants to do and I respect that.”

Jennifer said her daughter started playing golf when she was seven years old, joining the youth golf program offered by the Notah Begay III Foundation with her older sister Candis.

“As a parent I try to support my kids and their interests,” she said. “They always need our support because that is the only way they can be successful. They need us to continue to advocate for them and we always tell our daughters that they can accomplish anything they want.”

Growing up, Summer said they trained at the Ladera Golf Course and the Santa Ana Golf Course. And in the summer, they entered several PGA Junior golf tournaments.

With Notah as a mentor, Summer said she learned a lot about the game.

“When I first started I found it to be very frustrating,” she said. “I really didn’t know anything about the game and I thought about how I can get the ball across the fairway.

“It really didn’t make any sense to me,” she added. “And when I trained with Notah Begay Jr., he put a lot of good thoughts into my head. He told me that to get this ball into hole you need a lot of patience and you need a lot of technique.”

With his mentoring, Summer said she was determined to learn the game.

“He helped me a lot and he helped me persevere through all those obstacles,” she said of the professional Diné player. “I remember him telling me that it takes practice because practice makes perfect.”

With her family moving back to the rez before she started high school, Summer said it was hard to make that transition after growing up living an urban life.

“It was difficult adjusting from a big city to the reservation,” she said. “That was an extremely big change and it was hard knowing that I couldn’t play golf.”

Instead of hitting the links, Summer found other means to stay active as she joined the cross-country, basketball, track and volleyball team at Alamo Navajo.

“The thing about cross-country and volleyball is it happens in the same season so I had to work around the obstacle of doing both sports,” she said. “Doing two sports at the same time was a challenge and I took on that challenge. I made it possible while keeping my grades up.”

With an emphasis on being a student first, Summer finished atop of her senior class. As the valedictorian, she finished with a 3.8 cumulative GPA.

In addition to Summer earning a scholarship, her older sister received one as well. According to her mom, Candis got a full-ride scholarship to attend Dodge City Community College — but like her younger sister she opted to enter the military, joining the Marines.

“She chose to enlist to the Marines because she wanted structure in her life,” Jennifer said of her oldest daughter. “My daughters lost their paternal grandparents the same year right after Candis graduated and at the time she couldn’t deal with the emotions.

“She didn’t want to make poor choices so she chose the military,” she said. “It kept her busy.”

Jennifer credits golf for instilling positive values that will help her daughters in life.

“It’s taught them a lot of discipline,” Jennifer said. “When they first started playing golf they had to stay patient. And when things got tough they stuck with it and they learned to be successful.”