Indiana Jones aside, archaeologists are usually retiring types, more comfortable among the relics of the past than living humans.

That certainly described Jason Nez until about five years ago when developers started eyeing the Confluence of the Colorado and Little Colorado Rivers, a sacred place in Navajo cosmology not far from his home on Coalmine Mesa, for a tramway and resort.

At a debate on the project hosted by a local high school, Nez spoke up against it, detailing the importance of the site to Diné history and the spiritual life of the traditional people who still live there.

The audience was visibly moved by the young archaeologist’s passion and eloquence, but possibly no one was as surprised as Nez himself. That was the moment, he said, that he realized “we have to speak up for resources that don’t have a voice of their own; otherwise we can lose those resources.”

These days, Nez is an employee of the National Park Service and can’t be as out-front in controversial environmental issues. But in between his considerable responsibilities as both a wildland firefighter and archaeologist, Nez tries to reach out to the public as much as possible, educating them on the value of prehistoric indigenous sites so that the public itself will be motivated to preserve them.

“I talk to school groups, professional groups, anybody who wants to learn,” he said earlier this month in a telephone interview from his home in Grand Canyon Village, Arizona.

From studying artifacts, and old-fashioned trial and error, he has learned how to craft and use ancient tools and make wood-fired pottery, adding a new dimension of interest to his popular talks. Most recently, Nez caught the attention of the Grand Canyon Historical Society, which chose him for its 2020 Pioneer Award. 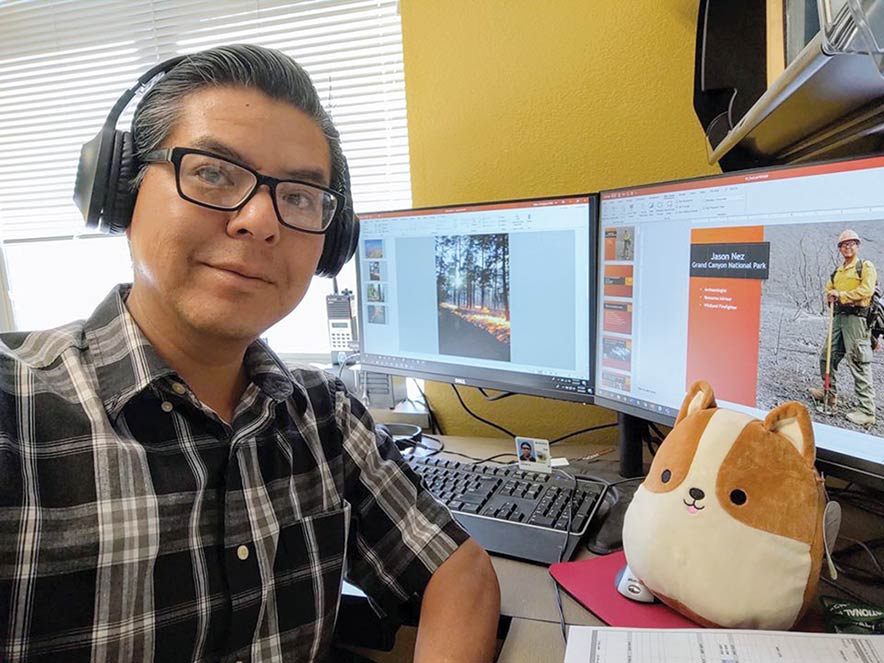 Courtesy photo
These days, a lot of the trainings and talks Jason Nez conducts are online, but he’s still an in-demand presenter. His ability to educate the public on sometimes esoteric issues recently got him noticed by the Grand Canyon Historical Society, which chose him for its 2020 Pioneer Award.

According to the group’s website, the Pioneer Award honors “living individuals who have made a significant and lasting contribution to the understanding of, and knowledge about, the Grand Canyon of the Colorado River.”

Nez, 42, said he was surprised to receive the accolade, but he’s glad the Native American perspective in resource management is being recognized and taken seriously.

“I think in the past, cultural and natural resource management lacked a lot of the human aspects,” mused Nez, who is Naashtezhi Tábaahá born for Oozei ’Ashiihí’. “I think the fact that I can tie these prehistoric landscapes to living tribes helps people to value them. There are seven generations that will need these resources to connect them to their stories and traditions.”

Nez is a “fire archaeologist,” a job that didn’t exist until fairly recently. Basically, he runs ahead of the firefighters to make sure pueblos and other cultural sites aren’t destroyed in the process of containing wildfires.

“When we’re fighting wildland fires, we have a variety of options,” Nez explained. “We may use a bulldozer and chainsaws to cut lines. That can lead to artifact scatter and destruction. It’s my job to help with those decisions, to make sure the right tools are used to avoid as much destruction as we can.”

Is it a hard sell in the, excuse the expression, heat of the moment? “I think 10 or 20 years ago it might have been,” Nez considered. “In my time, I think we’re changing attitudes. Everyone wants to save history.” Sometimes a blaze will scorch away undergrowth and reveal an enticing, previously unknown pueblo (please don’t call them “ruins,” Nez advised; the modern Puebloans don’t appreciate that terminology).

But until the fire is out, Nez can only make a note of the location and come back later.

He gets really excited when a Navajo site is revealed, since people sometimes minimize the Diné connection to the Grand Canyon. But that doesn’t happen often. “As a nomadic people, we left a very light presence on the land,” Nez explained. “As likely as not, our early dwellings would have been made out of wood, which has long since burned or rotted away.”

Archaeology may seem like a countercultural career for a Navajo, but Nez doesn’t see it that way. “Our deep respect for prehistoric structures is sometimes misinterpreted as fear,” he said. “In fact, if you look at our clan system, we have a lot of ties to other tribes, other groups whose ancestors built these structures. We have a deep connection to them.”

Delores Aguirre, who worked with Nez in opposing the development of the Grand Canyon Escalade, said she was thrilled to hear of his selection for the historical society award.

“It’s well deserved,” she said. “I think what makes Jason unique, in addition to his knowledge, is a talent for communication. He can communicate the traditional Navajo beliefs to the mainstream in a way that they’ll understand them, and then at the same time he can communicate science to kids and older, traditional people.”

Nez said he’ll be pleased to accept the Pioneer Award at a planned ceremony in July that, as yet, hasn’t been canceled.

“It’s not just for me,” he noted. “What I do as an archaeologist, what I do as a scientist, what I do as a person, is the sum of all the stories my parents and grandparents told me, the teachings of all my aunts and uncles, every teacher I’ve had from grade school to college. “This award is for my whole family, my tribe and all Native people.”