Shandiin Harper may not be the first of her siblings to go to college, but she will be the first to go and play sports at the collegiate level. 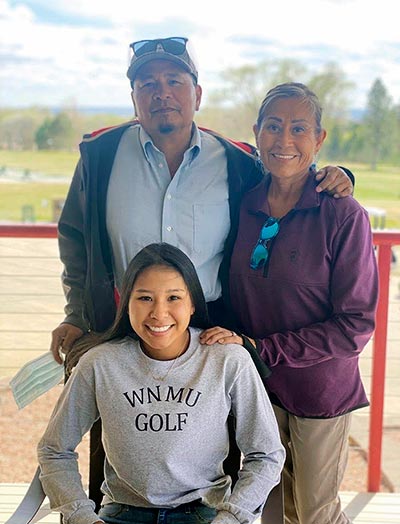 Submitted
Piedra Vista senior Shandiin Harper (center) is pictured here with her parents Melton and Susan Harper after signing her letter-of-intent to play for the Western New Mexico University women’s golf team while studying to be an anesthesiologist.

The senior from Piedra Vista High in Farmington will be playing golf for Western New Mexico University while studying to be an anesthesiologist.

“Golf is such an individual sport,” Harper said. “Other sports are team sports, but in golf it’s all about you, and that is why I like it. I just want to improve my game overall. I just want to keep getting better and better. I have a lot to learn and want to keep learning while I’m in college.”

Harper has been a skilled athlete ever since she was young. Her parents, Melton and Susan Harper, wanted their children to be healthy and so encouraged them to play sports.

When Harper was young, her father would sometimes take her to the golf course with him. She would play while he golfed, but on occasion, she would hit a few balls as well. It would be a while before the sport finally stuck.

While playing sports, Shandiin Harper would also volunteer to help younger athletes in organizations like the Special Olympics.

During her high school career, she would end up on the top 10 high school golfers list and compete in large events like the Notah Begay III Junior Golf National Championship, which would be broadcast live.

This year her school started its golfing season late, but in its first competition she finished second in the SCAGA Shootout at the Desert tournament in Albuquerque.

In addition to golf, she also played softball for a while. Twice her high school team would qualify for the USSSA Softball World Series.

Although a good softball player, Harper decided to put her focus on golf and left the softball field in her junior year.

“She’s got a lot to learn because they say the golf game is a sport that you could never perfect,” Melton Harper said. “To compete at the college level and compete against all these other good athletes, it’s exciting to see her grow and see how she does in college and how much she puts in it and see where it gets her.

“But the important thing about going to college on a sports scholarship is that she gets to go to college and get an education – that’s the foremost priority,” he said.

Her coach, Thomas Yost, had known her for a long time, having first met her when her father would bring her golfing almost eight years ago.

“She’s really starting to mature and develop that kind of mentality,” he said. “She is a good person, a good leader, and I think that will continue in college.”

Through the years Shandiin Harper would compete in many school competitions and tournaments.

“I’d say I’m very competitive,” she said. “Every game, every tournament I get into, I want to win. I don’t ever show up to a tournament not wanting to place anywhere lower than first place.”

The past year, however, proved to be devastating for the Harper family as the COVID-19 virus struck. Not only would she lose last year’s season, but she also lost her grandparents to the virus.

“I lost both my paternal grandpa and grandma so that was hard, but It made me try harder,” Shadiin said.

Using that strength, she spent the past year honing her abilities and going to competitions. Often it was quite costly and the family would fundraise to get her to compete.

The Harper family thanks the Notah Begay III Foundation for its support as it assisted in getting Harper into these competitions. Harper has since become a part of the foundation and will be helping to promote golf for Native youths.

“Shandiin is such a beautiful young lady,” Susan Harper said. “She is willing to meet challenges as far as golf and just basically daily living … I want her to achieve, to continue to learn from golf and also excel in many ways as far as education.

“And most of all I want her to be able to learn from being in college and playing golf,” she said. “I’m just very proud of her.”

Thanks to these competitions, Shadiin attracted enough attention to be recognized by college scouts and receive offers from schools. She eventually chose Western New Mexico University, a Division II school where she can be close to home while also obtaining her academic and athletic goals.

“She is always trying to improve,” Yost said. “She is very motivated and she works very hard, so I think you put all of that together that will equal a win, not just in golf but also in life as well.

“She is very respectful and she is very sweet, but she also has that killer instinct when she is on the golf course as well,” he said. “She is a total person. She developed as a whole which is rare in today’s world.”

For Shandiin Harper, golf is something that she loves and which in turn has helped her grow as a person. Learning to be a disciplined, respectful, and honest person, she hopes to improve her game while also pursuing her education.

“When I go to a golf tournament, I’ve never seen more than maybe one Native golfer,” she said. “So when I do win and I beat all these other girls, it’s something that I take pride in because I am Native American.”