Acting in ‘Guadalupe’ life-changing for Diné 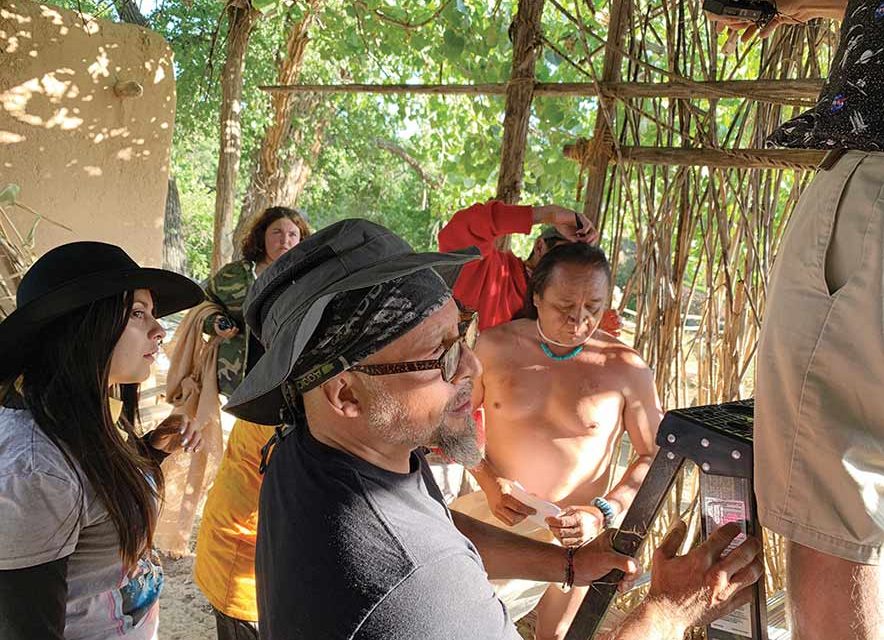 Searching for something spiritual to do with their families over an Easter weekend with no in-person Mass, thousands of Catholics turned to that staple of the pandemic – online streaming services.

Many stumbled upon a simple but powerful new film about Our Lady of Guadalupe, the vision of the Virgin Mary that appeared to a young Native man in Mexico in 1531, leaving her image on his cloak.

Navajos who downloaded “Lady of Guadalupe” on Apple TV may have been surprised to see a familiar face — activist and former Navajo Nation presidential candidate Norman Patrick Brown of Chinle.

Brown, who is also an actor and filmmaker (Independent Lens, “Poison Wind,” “The Thin Red Line”), plays the uncle of Juan Diego, the Chichimeca man to whom the Virgin appears.

It’s not a huge part, but it’s pretty meaty … college acting teachers are fond of saying you haven’t really acted until you’ve died on stage; Brown gets to almost die and then experience a miraculous recovery.

It may seem like a surprising role for Brown, a traditionalist who has been active in the Native American rights movement for decades, but he said he had no qualms about accepting the part.

“My dad was traditional, but my mom was a devout Catholic,” he said. “I had a traditional blessing when I was born, but I was also an altar boy. I drew from both traditions when playing this character.”

His mother, he said, often drew comparisons between the Virgin Mary and Changing Woman.

“She saw them as the same person: the divine mother,” he explained.

And in fact, the reason the Virgin of Guadalupe appealed so much to the Native Mexicans, Brown learned while working on the film, is that many believe her to be a version of the Aztec deity Tonantzin, which literally translates as “Our Little Mother.” 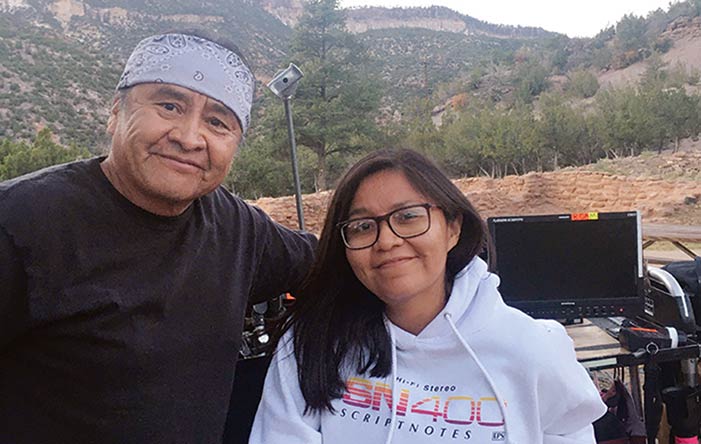 According to the documentary “Our Lady of Guadalupe – Amazing Scientific Analysis,” the details in her image captured on Juan Diego’s tilma would have been recognizable to any Aztec traditionalist: the constellations on her robe, the turquoise and rose colors of Aztec royalty, the purple sash (indicating pregnancy), the four-petaled flowers symbolizing the cardinal directions.

“Why would she appear as a Catholic saint? Maybe to save millions of lives,” Brown (and not a few religious scholars) surmised.

The colonizing Spaniards had already wiped out about 20 million Mexican Natives by the early 16th Century; the fact that millions converted to Christianity after the vision caused the conquistadors to spare them, and peace ensued.

The story of Guadalupe has been told in film many times before, but Brown says this version has the most Native perspective. The brutality of the colonizers is apparent, but Juan Diego manages to convince some of his tribe (including his uncle) not to match violence with violence.

“Juan Diego was not just ‘a simple villager,’ as they always say when telling this story,” Brown said. “I was talking to a curandera of Mexican descent who saw the film, and she said the Indigenous people there consider him a highly evolved person. It was no coincidence that the Virgin chose him to appear to.”

The movie also has a parallel, modern-day plot in which a reporter working for a Latino publication finds his faith again while researching a story about devotion to the Virgin of Guadalupe.
Both Juan Diego and the modern-day reporter, John Martinez, are played by Mexican actor/director/producer Guillermo Iván.

For Brown, just landing the role after a 20-year hiatus from acting was somewhat miraculous.

“After the (2018) election, I was in a really dark place,” said Brown. “I isolated myself and just didn’t talk to anybody.”

Fourteen months later, a friend told Brown, who is represented by DMe Talent Agency, that a producer was looking for indigenous actors for a movie to be filmed in New Mexico.

“I shot my audition on my iPhone, and a week later I moved to Albuquerque,” Brown recalled.

He had almost forgotten about the audition when he got the call.

“They said, ‘We need you north of Santa Fe as soon as you can get there,’” he said. “I said, ‘No problem, I’ve memorized my four lines.’ I had auditioned for a minor part. They said, ‘No, we want you to play the uncle!’ I had to memorize like four pages of dialogue by the next day.”

A few days later Brown’s brother called to ask if Brown was OK, not having heard from him for a while. When Brown told him about the Guadalupe film, there was a pause.

“He said, ‘I said a long prayer and asked the Virgin Mary to bless you.’

“I said, ‘What day was that?’ ‘Friday,’ he said.” Brown was offered the part on Saturday.

Producer Johnny Murillo said Brown was, in turn, a godsend for the production.

“We actually had someone else in mind for the part, but he couldn’t make the time frame,” Murillo recalled. “Normally actors have about a month to look at the script. Norman had a week. But he did it. I think he probably did a better job than the guy we had in mind for the part.”

He was also a good sport.

“There’s one scene where the Natives are gathered around a campfire, where they’ve taken a Spanish hostage,” Murillo said. “It was October and it was really cold, about 26 degrees. Norman was in a little more than a loincloth. He didn’t complain.”

The other Navajo on the set, script supervisor Miranda Calamity, was also an integral part of the crew, Murillo said.

“I think she’s the best script supervisor in Hollywood,” he said. “It’s a big job — ‘script supervisor’ is kind of a misnomer because it really involves observing all the details and making sure there’s no discrepancies, like if someone came out in a ponytail and their hair was down in the last take. Miranda caught a bunch of stuff.”

“There’s a lot of Navajo talent that needs to be seen,” he said. “I’d love to make a movie on Navajo and give the people some jobs, teach people how to be aides, how to be grips.”

And though Murillo is on to other projects now, “Guadalupe” has a special place in his heart.

“We’re getting a lot of good feedback on the film because of the timing,” he said. “We’re just coming out of a worldwide pandemic. People desperately want a message of hope.”

And, as a former youth pastor, Murillo thinks it’s no coincidence that production was delayed, resulting in a springtime release although the story takes place in December.

“Of course, if you’re a believer and you’re working on a spiritual project, you see the hand of God in it somewhere,” he said.

As for Brown, “Guadalupe” got him out of a major slump. He’s now excitedly working on two screenplays and auditioning for other films.

“It was a life-changer for me, and I’m not the only one,” he said. “I keep hearing how the film has affected people positively in different ways.”