5 of 17 INFR world champions are Diné 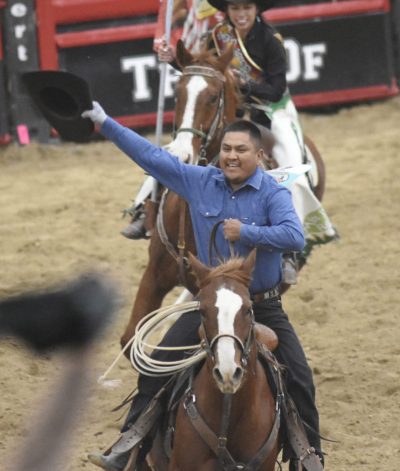 The Indian National Finals Rodeo crowned 17 world champions on Saturday with the Diné contingent attaining a fair share of those laurels.

They finished the four-round aggregate in 23.90 seconds and beat out the team of Monte Dan and Willie Nez as the latter pair finished with a 25.20 aggregate.

“It was pretty tough,” John said of winning his title. “I had a tough year and I had a lot of ups and downs. Nonetheless, we stuck through it and we worked our butts off to be in the situation that we were in tonight.”

John said everyone who qualifies for the INFR wants to win the world title and make their families proud. Not only did he win a world title, his horse was involved with another title as Jareth Hale rode her to the gold in the ladies’ breakaway event.

“I have to give a lot of credit to her,” John said of Lady, his prized equine. “I’ve had her since she was 3 years old and she’s 19 now. We’ve had a lot of history together.”

Hale kept herself in contention by roping smart during the weeklong rodeo. The Ganado cowgirl won her world title by a fraction of a second as she roped four draws in 12.21 seconds with reserve champion Jacquelyn Peterson finishing a close second with a 12.27 aggregate.

Hale, an avid barrel racer, said she grew up wanting to be a world champion and she never imagined that it would come in her first qualification as a breakaway roper.

“This is an amazing feeling and this actually happened,” she said. “This isn’t my strongest event but if I want to do something I set my mind to do it.”

Flagstaff bull rider Wyatt Nez, who captured the hearts of many, won his first world title in impressive fashion as he was the only rider to go a perfect 4-for-4.

Nez mesmerized the large capacity crowd by ending the rodeo with a whopping 89-point ride in Saturday’s championship round. That ride gave him an aggregate of 327 points.

“It really means a lot to me that everyone came out to support me,” Nez said. “As much I love this sport I couldn’t let this get to my head. I still had to take it one jump at a time.”

Earlier in the day, two world titles were won in junior/senior events.

Gallup cowboy Chance Thomas won two of three rounds to claim the junior bull riding championship with an aggregate of 229 points. He won the first two rounds with scores of 84- and 72-point marks and in the short round he took third with a 73-point effort.

“This is a dream come true,” Thomas said. “I feel like I’m a hero. I worked very hard this year and I think my hard work paid off.”

“Persistence pays off because we could have won the first round and we could have placed in the second round but my partner had a leg,” Boyd said. “We made it back in the short round and the third round was a charm.”

As the sixth high-call back, Boyd said he wanted to pressure the other top teams. After they roped their 6.53 run in the short round, four of the next five teams posted a no-time.

“That was my game plan going in,” he said. “I wanted to jump out there as fast as I can and try to stick it on and make everybody else nervous.”

For a more in-depth story pick up Thursday’s Navajo Times.