Of all the qualifiers, Spider Ramone competed in both the open and senior events at this year’s Indian National Finals Rodeo. 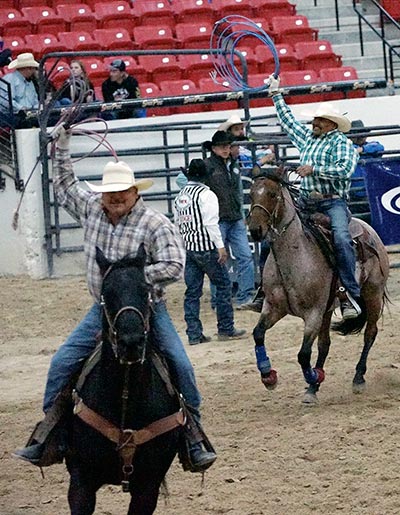 The Diné cowboy, who currently lives in Montana, qualified in three events. He participated in open team roping, the senior breakaway, and the senior team roping.

He won a world title in the latter event with heading partner Don Bettelyoun.

“I’ve known Don for a really long time,” said Ramone, who is originally from Crownpoint. “I used to rope with him back in the day in the open, and what it comes down to is you got to trust your partner.”

The pair recorded three runs in 23.93 seconds, including a first-place effort of 9.12 seconds in Saturday afternoon’s short-round performance.

“We had a pretty good steer on our last run,” he said. “I trusted my header for him to go do his thing, and I had to do my job at the back end, so everything went well.”

The pair also turned in a first-place run of 7.04 seconds in the opening round. They added a fifth-place run of 5.46 in the next round.

He won the second round with a sizzling 1.95 run in the senior breakaway.

“I missed my first and third rounds, but I still got a check out of this,” Ramone said.

For the 2022 season, Ramone was named the senior breakaway tour champion, having grossed $5,964.

“It’s one of those deals that you chase all summer long,” he said of winning the tour. “I didn’t keep track of it, and I ended up winning the deal.”

Looking back, the Montana cowboy said he’s earned multiple qualifications to the INFR in his lifetime. In fact, he won his first crown in 1989 when he teamed up with Benny Ramone to win the open.

In 2013, he partnered with Ted Hoyt for the senior team roping title.

“I’ve been doing this for a long time, and it’s something that I enjoy doing,” the 59-year-old cowboy said. “I’m going to go home and take a little break, but I’ll be back at it when the tour rodeo comes into town in Rapid City.”