History was made in the junior breakaway event. 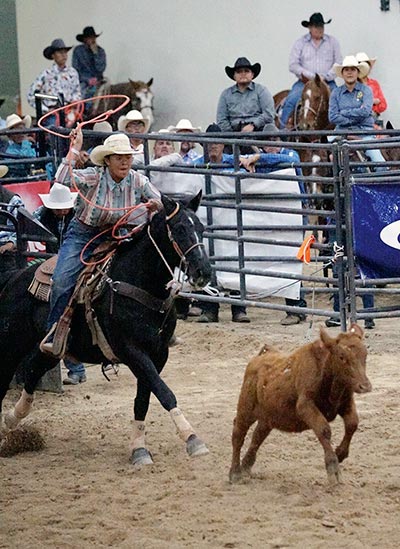 Navajo Times | Quentin Jodie
Arizona cowgirl Kylie Dodson made history as the first female winner in the junior breakaway at the 2022 INFR. Dodson won the world title by posting three runs in 10.66 seconds.

Since its inception in 2010, the INFR has crowned a male champion in said event until this year.

Dodson broke down those barriers by winning the event in her INFR debut. She roped three draws in 10.66 seconds and held off two other contenders for the coveted title.

“I just went in there and did what I had to do to come out on top,” she said.

Her final run of 3.57 seconds sealed the deal for the Tonalea, Arizona, cowgirl as she placed third in the championship round on Saturday afternoon.

“I treated this one like my other runs,” Dodson said. “I knew I had to set myself up for a good run. I just had to be consistent, but I was hoping for the best.”

This was Dodson’s last year to compete at the junior level, as she is set to compete in the open division next year.

She won her world title after getting qualified in the Last Chance Qualifier two weeks ago when she finished third overall.

In an emotional speech, Dodson credited her world title to her late cousin, Aaron Clark, who passed away two years ago.

“He was a bull rider,” Dodson said. “Before he passed, we made a promise to each other that we would both make the INFR.

“I took it upon myself to make it here after he passed,” she said. “I kept my promise, and in my first year, I won it.”

Now that she’s graduated from the junior breakaway ranks, Dodson feels that she’s ready to compete in the open.

“I’m super excited,” the Monument Valley High junior said. “I almost qualified for the ladies breakaway at the Last Chance Qualifier, but I missed my last calf.

“I’m super excited, and I hope I do good next year,” she added.