Hours of practice pay off big for roper 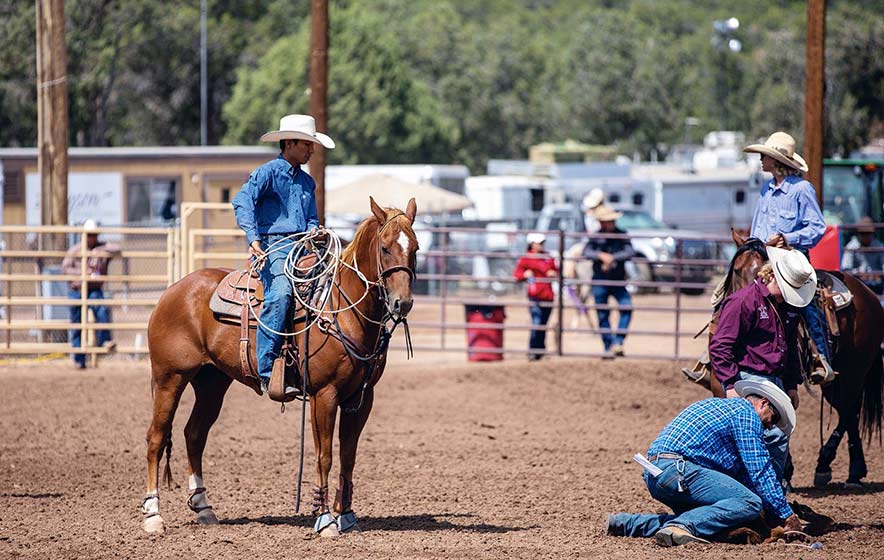 James Arviso has invested a considerable amount of time honing his skills as a team roper.

The 17-year-old spent countless hours swinging his rope and all that practice paid dividends at the recent USTRC National Finals of Team Roping at the Will Rogers Memorial Center in Fort Worth, Texas.

Arviso took home three paychecks totaling $35,400 in his debut at the national finals, which was held from Sept. 8 to 13.

“I kind of expected to win some money but not that much,” Arviso said. “I’ve placed a lot of smaller roping but nothing this big.”

At the weeklong event, Arviso got entered six times and he finished as the reserve champion in the both the No. 14.5 and No. 13.5 ropings.

In the first roping, he partnered with Texas cowboy Josh Patten as they recorded four runs in 28.77 seconds with event winners Rowdy Bluemel and Cutter Thomison winning it in 27.90.

In that roping they entered the short round as the eighth high callback and after completing their run they momentarily gained the top spot before the Bluemel/Thomison team took over.

“The guy that heeled for me had won the (No. 16.5) roping before we competed,” Arviso said of Patten. “We ended up having the same steer he won it with in the roping before. He just told that that it was a good steer and we just made a good run on him.”

And although they put pressure on the teams before them, Arviso said that wasn’t the intent.

“We were just roping,” he said. “We just wanted to catch.”

After that monumental triumph, Arviso netted two more checks in the No. 13.5 roping as he placed second and fourth with heeling partners Zane Pratt of Acton, California, and Cooper Freeman of Carthage, Missouri.

With Pratt, the Gallup cowboy moved up five spots in the aggregate race as they roped four steers in 28.02 seconds, losing the title to Kohl Whitman of Dike, Texas, and Austyn Ford of Purvis, Mississippi, with the latter pair recording a 27.23 aggregate.

As for his other run, Arviso moved up one spot with Freeman as they posted a four-steer average of 29.33 seconds.

Admittedly, the home-schooled junior said he felt a lot of nerves even though he’s competed in a boatload of short-round performances.

“It’s a totally different feeling,” he said. “I was a little more nervous in the 14 roping but you can’t let that bother you. You just have to rope your steer like you do in the practice pen.”

In Saturday’s rodeo, they recorded a 7.830 run for third place and on Sunday took second with a much faster run of 6.670 seconds.

“We have known each other for awhile, and we’ve roped at a lot of jackpots,” Arviso said of his high school heeling partner.

For the previous two years, Arviso had teamed up with Indian Wells, Arizona, cowboy Jaken Todacheenie but he graduated last spring.

“I was looking for a new partner and Cashton needed one too,” he said.

“Their support goes a long way,” he said. “I wouldn’t be here without them.”