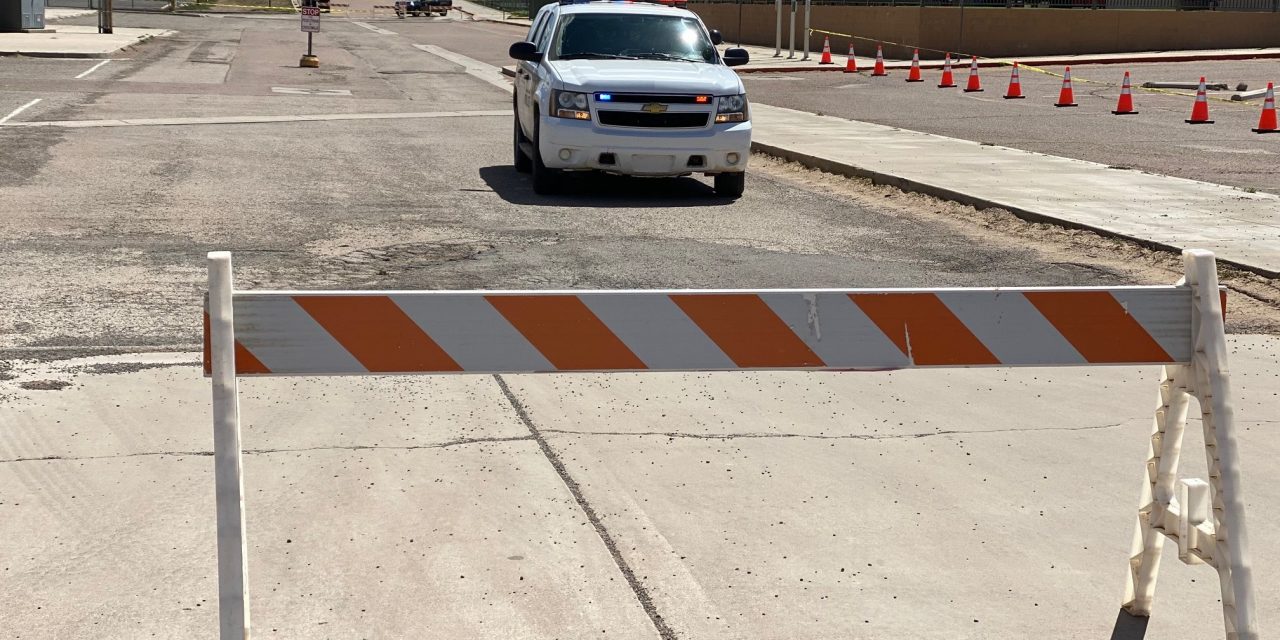 Navajo Times | Donovan Quintero Police barricaded off the Chinle Community Center Monday while the National Guard converted it into a 50-bed quarantine facility for people who have tested positive for the novel coronavirus.

In a live town hall hosted by President Jonathan Nez on Monday, the country’s top infectious disease expert – Dr. Anthony Fauci – acknowledged that while the Navajo Nation was hit particularly hard by the coronavirus, its response to the outbreak has been exemplary. “You have been very successful,” Fauci said. “You rose to the occasion, despite the difficulties you were having, to bring down the level of new cases to a very low number. And you did that by abiding the things that I have been speaking about to the rest of the country on a daily basis.”

Those safety measures include wearing masks uniformly and avoiding crowds and close contact with others, he said. Fauci is the director of the National Institute of Allergy and Infectious Diseases and is a member of the White House Coronavirus Task Force.

“The reason you should be proud of what you have accomplished is that you have proven that when you do these public health measures, you can turn around a serious surge of infection,” said Fauci. He believes that if the rest of the country followed the model that the Navajo Nation has demonstrated, the same result could be seen throughout the United States. “You have done things extraordinarily well and when I go out and plead with the rest of the nation, I will actually bring up the example of the success of what the Navajo Nation has been able to do,” said Fauci. “I’m sorry you went through such a terrible ordeal, but I’m glad that we can use you as a model of what happens when you do things correctly.”

Fauci cautioned that continuing to adhere to the safety precautions is extremely important as we enter the fall and winter seasons, when the ability to physically separate outdoors becomes much more difficult and people transition to spending more time indoors. “We know that the coronavirus is not going to disappear and as we go indoors it likely will challenge us for a surge,” he said.

Nez said over 60% of the over 500 COVID-19 deaths on the Navajo Nation were among those 60 years old and over, making it all the more important to continue following the guidelines. He credited Navajo Nation youth for protecting their elders. “Our elderly are holding our way of life teachings, our culture, and our language,” he said.

Nez urged everyone to keep wearing their masks, social distancing, and washing their hands with soap and water. “We can’t let up,” he said. “We want you to continue to use the armor and the weapons we have to fight this monster.”

In addressing the safety of the Pfizer vaccine trials beginning on Navajo, Fauci said that one of the things that triggers questions about safety is how quickly we have gone from the identification of the virus in January to a Phase 1 trial within a couple of months and now a Phase 3 trial.

“One of the assurances that you are dealing with something that is safe is that each vaccine that is tested has a Data and Safety Monitoring Board, which is an independent group that looks at the data to determine at which point you can say that the vaccine is effective,” he said.

He explained that the DSMB monitors any adverse events that could be related to the vaccine. “They have the power to put a pause in the study,” he said. He said before a vaccine is approved, the FDA will also scrutinize the data and make a determination if it’s safe and effective. “We should feel confident that since these things are transparent, when a vaccine is ready, in the sense of proven safety and efficacy, it will not be released to the American public before that time,” he said.

The availability of a vaccine will be dependent upon when a vaccine is shown to be safe and effective, said Fauci, which could happen as early as late October. He explained that in anticipation of a vaccine being approved, the U.S. government has already pre-ordered “hundreds of millions” of doses so that they can prepare for distribution.

If, say, the vaccine is shown to be safe and effective in November, by December or January Fauci said there should be vaccine availability for millions of people in the priority groups, including health care providers, older adults, and those with underlying conditions.

He estimates that by next April, they will have 700 million doses available, which would be enough to cover the U.S. population for the initial injection and a follow-up booster shot. The final determination of approval and timeline will be made by the Centers for Disease Control and Prevention, he said.

Dr. Laura Hammitt, director of infectious disease programs at the John Hopkins Center for American Indian Health, said that many trials are ongoing to identify a safe and effective vaccine.

“These trials have enrolled tens of thousands of Americans but Native Americans have been effectively denied the opportunity to participate in the clinical trials, which are mostly taking place in large urban areas,” she said.

While tribal communities do need to be cautious given past research abuses, said Hammitt, the decision to offer the Pfizer trial on Navajo came with the input of community members and health care experts serving the Navajo Nation. However, the decision to move forward with the trials was ultimately made by the Navajo Nation Human Research Review Board that makes sure that studies on the Nation offer potential benefit, have reassuring safety profiles, and are conducted in an ethical manner, said Hammitt.

“We all recognize it’s important to see the trials focus on the diversity of the population in the U.S,” Nez said. “As a sovereign nation, we have the ability to allow our citizens who want to participate for the overall good of our people to take part in these trials.”

Hammitt said Johns Hopkins has partnered with the Navajo Nation, the Indian Health Service, and ’638 tribal health facilities for over 30 years to reduce infectious disease and has conducted numerous Phase 3 clinical trials. “Historically, vaccines have been one of the most powerful tools we have to reduce health disparities and improve lives of Navajo families,” she said.

The Pfizer trial has enrolled over 25,000 participants in the U.S. and over 30,000 worldwide. So far the data shows that the vaccine stimulates a strong immune response with minimal side effects, said Hammitt. “Because of the amount of death and disease we’ve seen from COVID-19 and the real need to prevent disease and help people get back to their normal lives, this vaccine development process is moving more quickly than ever before,” she said.

Regardless, the FDA is making sure all of the proper processes are being followed, she said. For the Navajo trial, healthy adults and those with stable underlying health conditions can participate, but anyone with prior COVID-19 disease cannot.

Participation is voluntary and follows an informed consent process. Hammitt says she’s optimistic that the Pfizer vaccine will be beneficial but the studies must be done to determine if that’s the case.

“Allowing opportunities for Native Americans to be included in these trials will help us to understand that the vaccines that are licensed for all Americans will work to protect the First Americans,” she said. Fauci commended the efforts of Dr. Hammitt and the Johns Hopkins team. “The fact that you are able to do a scientifically, ethically sound vaccine trial in this demographic group is very important,” said Fauci.

“Hopefully, we’ll be able to get the information we need to be able to say to the people of the Navajo Nation that the vaccines will in fact be safe and effective in you because we’ve proven it in a vaccine trial.”

Nez asked for Fauci’s advice regarding school openings, especially considering that many children on the Navajo Nation go to schools off-reservation where COVID-19 safety regulations might be less strict.

For example, in Arizona and Utah, there are no mask mandates. Nez said many teachers and parents have expressed concern about schools starting in-person classes, particularly with the possibility of a second wave of COVID-19 and the onset of flu season.

“If you have children going out into an area that isn’t as stringently trying to control the infection as you are doing within the confines of the Navajo Nation, then there’s the danger of bringing infection back,” responded Fauci. The manner in which children go back to school is dependent on the prevalence of the virus in each community, he said. “What we recommend is that if you are in a green zone (where COVID has almost been eliminated), then you can very likely get the children back to school in-person,” said Fauci.

However, he said it’s important to have a plan for identifying and segregating any COVID-19 infections so that they don’t spread to others. “Particularly if you have multi-generational households on the Navajo Nation, we have to be careful that we don’t spread the infection to elders,” said Fauci. Fauci advised that if you are in a yellow or red zone, modifications need to be made for getting kids back to school such as a hybrid model of virtual and in-person learning along with strict requirements for safety such as wearing masks and physical distancing.

“For those in a red zone, I think you have to consider whether it’s prudent to bring them back to school until community spread is reduced to minimize danger of infection,” he said. According to COVIDActNow.org, McKinley and San Juan counties in New Mexico and Navajo County in Arizona are in the yellow zone, and Apache and Coconino counties in Arizona, along with San Juan County in Utah, are in the red zone.

With regard to the flu, Fauci advises that as many as people as possible get their flu shot to prevent the confluence of the two respiratory-borne illnesses. On the bright side, Fauci said that the strict safety mandates that the Navajo Nation has implemented might help prevent the flu as well as coronavirus. “If we get vaccinated and we superimpose the public health measures you are enacting, you may get influenza off the table,” he said.

Nez told Fauci that the Navajo Nation is close to having tested 50% of the population, which he believes is the highest test rate in the country. “We made it a priority to test as many of our Navajo citizens as we can,” said Nez. Fauci said there are now multiple types of testing available that can be used for different purposes.

While the standard swab test is particularly good for its sensitivity and specificity in detecting the presence of COVID-19, it can take up to 48 hours to get results, he said. Fauci explained that there are rapid tests that are better used for things like surveillance and contact tracing. He recommended that the Nation have a plan in place for doing intermittent surveillance in representative segments of the population.

“That would give you a good idea if there are any (COVID-19) penetrants in the population,” he said. Fauci recommended using the rapid antigen tests, which are relatively inexpensive, don’t require special equipment, and produce results in 10-15 minutes. “I think this would be very beneficial to the Navajo Nation,” he said.