The weeklong Navajo Nation Fair got off to a rousing start on Tuesday night with the annual Buckin’ on the Rez PBR event.

The PBR Challenger Series returned after a two-year hiatus due to the global pandemic.

Fans came in droves as they filled up most of the grandstand inside the Dean C. Jackson Memorial Arena in Window Rock.

“I love it here,” Jesus said, adding that this event required less traveling plans compared to his usual itinerary in the PBR Team Series Championships.

“I kind of relaxed today and I got to drive down, and I got to see some buddies around here and some longtime fans that are out here,” he said. “I got to catch up a little bit and it was super fun.”

He opted for the re-ride but got bucked off his draw.

“I didn’t think it’d be as a good turnout as it was, and it was packed,” Jesus said. “When I got my re-ride that crowd wanted to see me win it. They didn’t come to see me win third and that is how I thought about it, so we tried to go for it all and it just didn’t work out.” 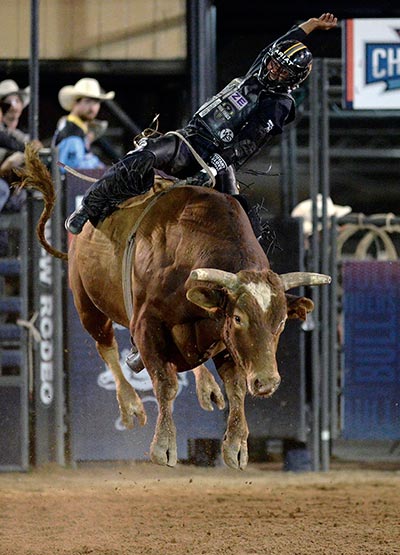 In his reride, Jesus rode Border Dust (Owen Washburn) and he finished 2.73 seconds on that bull.

“He was just a wild little bull,” the Diné rider said. “He’s fast and I had just kicked his belly and I just kind of jacked my timing.

“I should have rode him for sure,” he said.

Jesus is riding for the Texas Rattlers in the new PBR Teams Series Championships.

“It’s been really fun,” he said. “You know, you get to fly somewhere and have a team waiting for you. We get to eat breakfast together, go to Topgolf together and go to the bull riding together.

“I really like the team aspect of it,” he said. “I love the camaraderie and I get to room with my teammates and get to talk and go to bull ridings.”

Event winner Vitor Losnake finished with a 173.50 aggregate, finishing ahead of compatriot Leandro Machado, who rode two bulls for 167 points.

Through his team coach Paulo Crimber of the Arizona Ridge Riders, Losnake said winning the event has lifted his confidence, which is much needed.

“I’ve been getting on ranked bulls and I got bucked off a few of them,” he said. “That kind of got me down, and to come here and ride two really great bulls.

“Both of them were good rides,” he said, “but the short round I had to step up to the plate and it forced me to do my best and work as hard because it went away from my hand.

Crimber said Losnake is a new addition to the Ridge Rider team, having been selected in the sixth round of the supplemental draft.

“This weekend is going to be the first event he’ll be riding for us in North Carolina,” Crimber said. “It’s nothing better than this big win to show how great he is too.”

Of the two rides he had, Losnake posted the event’s highest score in the championship round, cementing his status as the top bull rider on Tuesday.

“I saw a lot of grit and a lot of talent,” Crimber said of his pupil. “The bull was riding away from his hand and bucking as hard as he could. 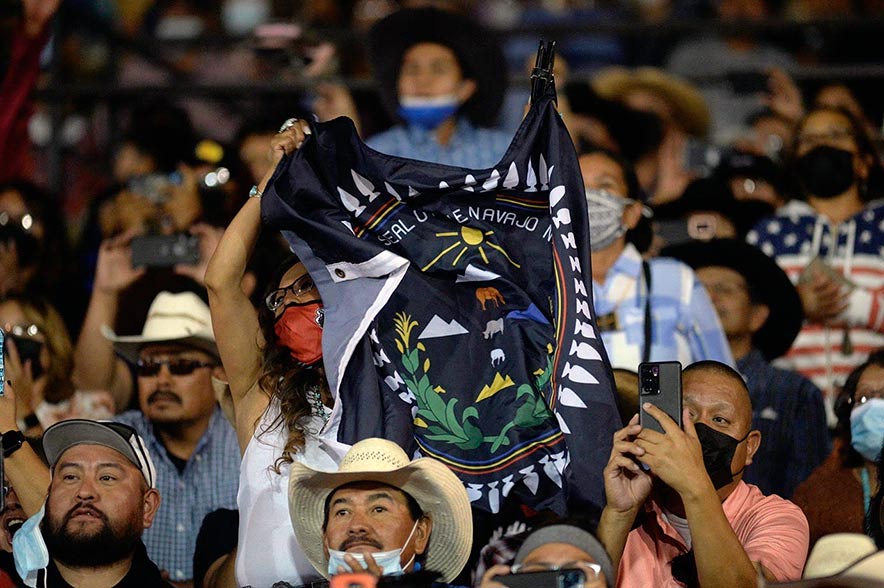 Navajo Times | Donovan Quintero
A woman holds up a Navajo Nation flag on Tuesday night at the Buckin’ on the Rez PBR event that was held at the Dean C. Jackson Memorial Arena in Window Rock.

“He took control and he had the domination to make a ride like that,” he added. “You have to be on your ‘A’ game to make that happen. And for him to win his first buckle in the United States that is really special for him to do that, and it’s very special for me to be here with him.”

The event win earned Losnake 41 points in the challenger series as the PBR will return to the team series for an event in Winston-Salem, North Carolina this weekend.