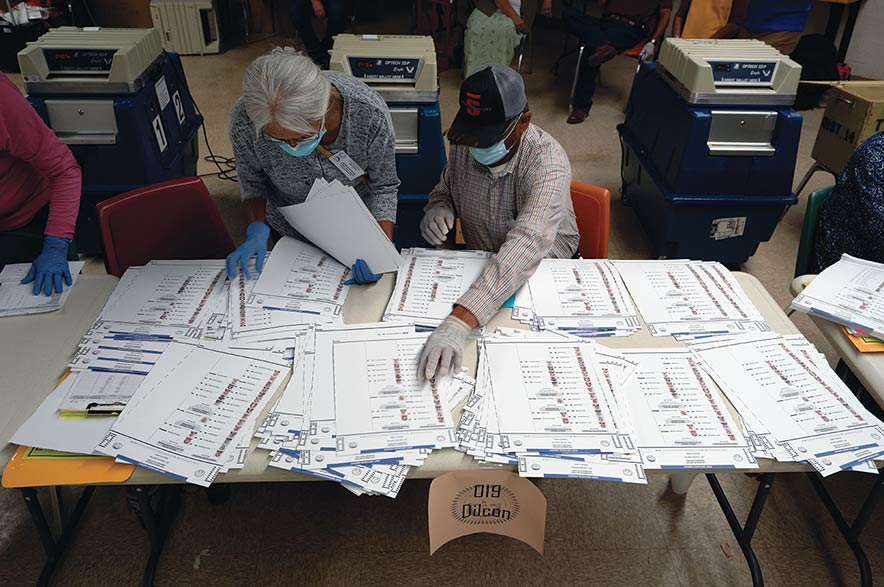 Navajo Times | Donovan Quintero
Election recount is in progress as poll workers arrange votes from each chapter on Sept. 1 at the Department of Diné Education building in Window Rock.

Eight former candidates for president sent a message to the Navajo Board of Election Supervisors and the Navajo Election Administration – discrepancies were found during the audit of the recount.

During the recount, Branch, Jumbo-Fitch, and Ellison conducted audits during the five days of the recount of the unofficial primary election results to learn how election officials kept ballots safe from tampering and potential fraud.

The audit uncovered more than a hundred unopened early and absentee ballots from Chilchinbeto, Becenti, Whitehorse Lake, and Manuelito.

Torreon Chapter, according to Jumbo-Fitch, had eight missing ballots.

Jumbo-Fitch, who unofficially finished with 298 votes, or .6%, in the primary, said the recount was an unnecessary struggle.

“It didn’t have to be this hard,” she said. “If there were Navajo Nation policies and procedures that said exactly what the process should have been, we would have had a lot more cooperation, a lot more success and a lot more answers.

“But not having that,” she said, “it just defeated the whole purpose for some of the areas we asked for a recount.”

The candidates recommended that election officials complete of a close review of the 10 largest chapters’ ballot boxes, particularly the used-ballot stubs, unused ballots, and early and absentee ballots.

They also asked for a complete accounting of early and absentee, unused and used-ballot stubs for all five agencies, according to their Sept. 6 letter.

The candidates also said election officials must match all of the voter’s signatures to the number of ballots that were given out on election day and during early voting.

On Wednesday morning, former candidate Frankie Davis said she hired attorney David Jordanand said they would be filing an injunction on Monday.
Davis had filed a grievance with the Office of Hearings and Appeals on Aug. 9, but was dismissed on Aug. 19, by OHA Chief Hearing Officer Joe B. Aguirre.
Davis received an unofficial 163, or .3%, of votes in the primary.

Eligibility of board members 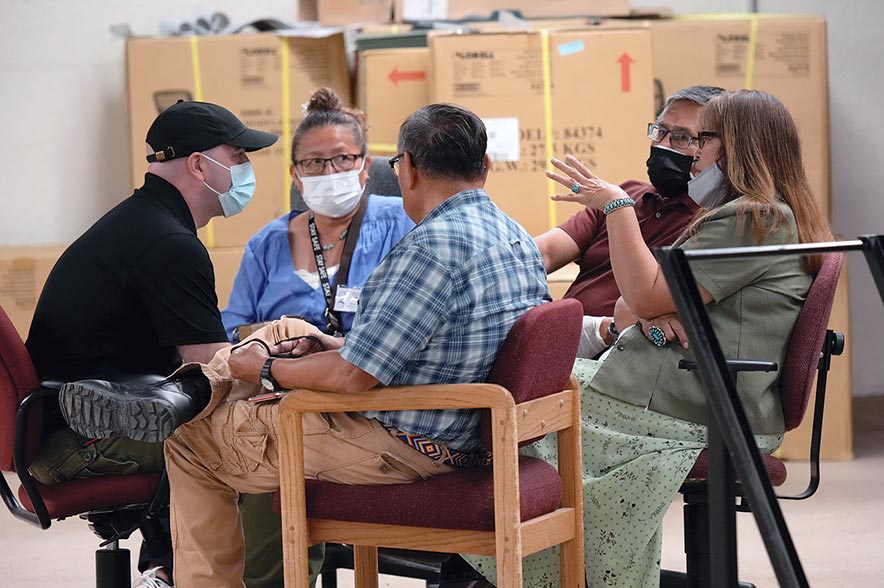 Navajo Times | Donovan Quintero
A few election board members and and staff talk among themselves as recount is in progress on Sept. 1 at the Department of Diné Education building in Window Rock.

The candidates also questioned the eligibility of election board member Young Jeff Tom, who had pleaded guilty and was sentenced in 2016 for conspiracy to commit bribery and providing $13,750 to his family, according to court documents.

Another letter, signed by Ellison, Branch and Jumbo-Fitch, was sent to election board Chairperson Melvin Harrison and election office Director Rosita Kelly on Aug. 19, urging them to remove Tom because he was violating Title 11 of the Navajo Nation Code due to his 2016 conviction.

The candidates also raised concerns about Tom’s colleague, Arbin Mitchell, who they said was in a conflict of interest because he is a paid staff member for President Jonathan Nez’s administration.

Mitchell recused himself but returned on Aug. 25. Neither Tom nor Mitchell attended the recount in person.

Branch, who unofficially received 3,857, or 8.1%, of votes in the primary election, felt the election board allowed election office staff to dictate the recount.

“The board should be holding them accountable in terms of protecting the vote for the Navajo people, so I found that really disappointing,” said Branch last Friday. “The board did act like it had something to hide.”

Branch also questioned why voting machines used in the Aug. 2 primary were not used for the recount because concerns about functionality and age were addressed several times during the election board’s regular meetings.

“It was a basic assumption and understanding that we would be simulating the election night counting activities,” she said. “It just never crossed my mind that they would swap the machines out.”

Election board Vice Chairperson Raymond Maxx said he hopes the recount would give people more confidence in the tribal election process.

“The poll officials that conduct the elections during elections, they have integrity, and they help people vote,” he said. “I saw a lot of emotions and personality come out and hopefully, we have this recount behind us.”

Maxx echoed poll worker Victor Yellowhair, who said last week on Tuesday that poll workers are the backbone of the government during elections.

“They are the backbone – it’s a lot of work,” Maxx said. “They have to go above and beyond their scope of work to get the elections done.

“Hopefully people will start to realize what it takes to conduct the election,” he said. “Going forward, we just ask that people bear with us and work with the election administration and poll officials, and we will strive to improve and upgrade everything that would improve the voting process.”

On the fourth day of the recount, Brent Detsoi from Ya-Tah-Hey, New Mexico, surprised the candidates and several election board members when he attempted to serve them unsigned court documents labeled as a Navajo Nation Supreme Court document.

Detsoi wrote that the recount allegedly revealed names of Navajo registered voters from Aneth Chapter on Aug. 31 when “media was live broadcasting onto Facebook.”

“The Navajo Nation Code says our right to vote is by secret ballot,” Detspo said the Ellison. “Yesterday (Aug. 31), Aneth’s, I was watching it online, and it was very disturbing to see people’s names,

Maxx, who was given a copy of the unsigned complaint, said Detsoi’s petition is to the Supreme Court, bypassing “every step along the way,” implying it might not be a legal document.

What is legal, the unofficial 47,928 votes cast during the Aug. 2 Primary Election, were recounted, which took place at the Department of Diné Education in Window Rock.

Prior to the recount, on Aug. 11, an email was sent to delegates Jamie Henio, Charlaine Tso and Nathaniel Brown listing several allegations against the board and the election office.

The allegations included infringement of right to vote by opening polling sites late, failure to ensure fair elections by allowing each presidential candidate to have a poll observer present during the balloting and during the counting of votes, failure of the board to operate with transparency in fulfilling its duties to educate the public and candidates with regard to proper execution of the electoral process, and failure to provide poll workers proper training.

“One time Joe Shirley went ahead and filed for a recount,” he said. “I told him that it wasn’t going to do him any good because the machines are very accurate.”

Wauneka said the voting machines were old but how they tabulated votes was not a problem.

“The only problem that they have is the parts are really hard to get because of how old they are,” he said of the machines, which are called Optech IIIP Eagle Voting Machines.

Wauneka said the election was not to blame – it was the candidates who were to blame.

“It’s you, how much effort you put into your campaign,” he said. “To me, it’s really got nothing to do with the elections. The staff really know what they’re doing, and they do a good job.”

Wauneka said he ran for the tribe’s highest seat twice and it would have been impossible for him to tamper with ballots.

“There’s no way I could have done that,” he said. “I have confidence in the staff and also the way the election process is done on the Navajo Nation,

Wauneka added the election board was a “quasi-independent office” that didn’t get the respect it deserves because they head the election office and are the immediate oversight over elections.

“Sometimes that responsibility is taken away from them when something like this happens,” he said. “I think we, as policy makers, need to amend some policies in order to put them on a more permanent basis.”

A regular meeting is scheduled for today at 9 a.m.

A march to protest the possible certification of the votes will start at 8:30 a.m. from the Bashas’ parking lot.

Coordinators of the march will hold a press conference at 10:30 a.m. at the election office behind Quality Inn in Window Rock.