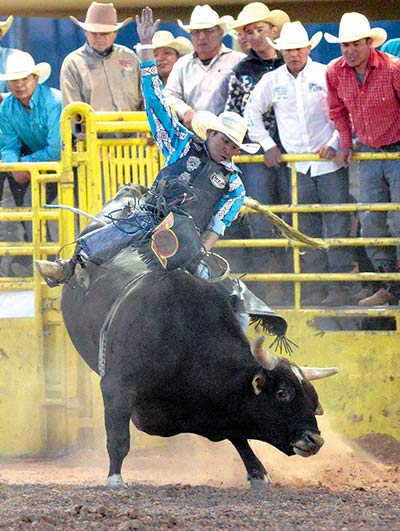 In this file photo Tustin Daye scored an 84-point ride and captured the 2017 Megabucks bull riding at the Dean C. Jackson Memorial Arena. This year’s annual event will be held at Red Rock Park to kick off the 98th Annual Gallup Inter-Tribal Indian Ceremonial.

In what is being called a “natural fit,” the Megabucks bull riding will open the 98th Annual Gallup Inter-Tribal Indian Ceremonial this weekend.

The event will feature at least 50 bull riders and 17 stock contractors vying for a combined purse of $20,000 at 7 p.m. on Saturday night at Red Rock Park.

“It’s a natural fit,” rodeo coordinator Kyle Tom said of inviting Megabucks to the Ceremonial. “We’re excited to have them on board. I think a Saturday night bull riding will be a lot of fun. I invite people to help us kickoff the Ceremonial. It will be something different.”

Megabucks coordinator Tye Arviso said he’s happy that Tom and Ceremonial board President Dudley Byerly reached out to him as he contemplated on keeping his bull-riding event in Window Rock.
“Being a part of that rich tradition means a lot,” he said.

Since his first event in 2007, Arviso said the intent of having it has never changed. As an advocate of promoting the talent among Native American bull riders, Arviso uses his event as a starting block to get them out there so they can compete at the professional level.

“We’re the only bull-riding event that gives 100 percent payback in the nation,” Arviso said. “Nothing has changed but the whole goal behind this is to get these guys from our area to realize their talent and succeed at the next level. I hope the big prize money they win will help them move onto bigger and better things.”