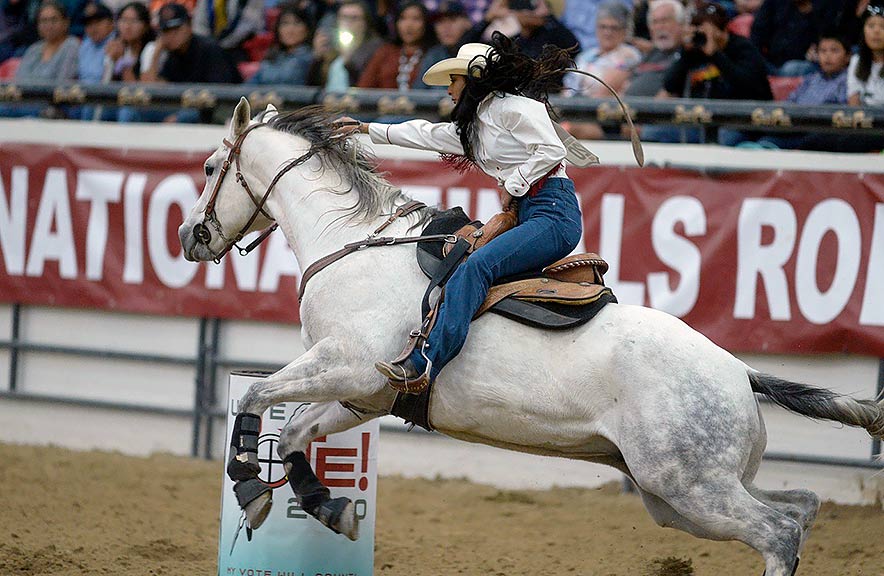 Submitted
Page, Arizona cowgirl Raynell Holgate circles around the barrel at the 2019 Indian National Finals Rodeo. The INFR is planning to host the world finals in October and they are awaiting the decision from the Navajo Nation Rodeo Association on whether they are going to send a qualifier amidst the novel coronavirus pandemic.

The jury is still out on whether the Navajo Nation Rodeo Association will send a qualifier to the Indian National Finals Rodeo.

The NNRA has to decide by June 1 what it plans to do for the upcoming season as the local affiliate will have one qualifying rodeo if it chooses to have a season under the cloud of the COVID-19 pandemic.

Of the 292 members, NNRA President Alvin Smith said only a handful of contestants have responded to a survey on the subject, which is online at www.nnrarodeo.org.

With only 89 responses as of Monday, Smith has extended the deadline through the rest of the week as he advised his board members to talk to their constituents by email or phone. The NNRA will make a decision Monday during its next conference call.

INFR Commissioner Carol Jackson-Holyan said the INFR is not pushing the NNRA to host a qualifier this year and if it chooses to forgo this year their memberships can rollover into next season.

“We’re just waiting for you all to get your information turned in,” Jackson-Holyan said. “It’s back in you guys’ ball court.”

Jackson-Holyan reassured the NNRA board members that if they opt out of this season they will not be penalized.

“There will be no repercussion and you can start up next year if it’s feasible,” she said. “But if you have your one qualifier, we’ll support you too. It’s just sad to hear all the bad news from home and I don’t want to have the tribe angry at you if you have this one rodeo.”

On Tuesday, a Navajo Nation Council resolution was sponsored by Shiprock Delegate Eugenia Charles-Newton canceling all tribal fairs and other rodeos and ropings planned on the Navajo Nation during 2020.

The bill is on hold during a five-day comment period before it moves through the different committees.

In response to the legislation, Jackson-Holyan wondered what kind of consequences the NNRA would face if it decides to host a qualifier, which would most likely take place off the reservation in Holbrook in mid-August.

“I’m just thinking about the long-term relations you have with the tribe if you go ahead and do this and have your rodeo,” she said.

Based on the feedback she’s seen on Facebook on a story the Navajo Times published last week about hosting a qualifier, NNRA ladies event director Kendra Paul said her personal preference is to roll over their membership to next year.

“The comments that I read were saying ‘How crazy are we to host a rodeo?’ and they advised us that we shouldn’t have one,” she said. “This virus is spreading fast and that’s the scary part.”

NNRA junior events coordinator Alfredo Stevenson chimed in, saying if the association does have a qualifier the virus could spread.

“I would suggest not having it,” he said, while noting that the decision they have to make is a tough one.

Paul said she wants the board to rely on the survey and see what they recommend.

The NNRA president said he would meet with Shawndeana Smith, the secretary/treasurer, who was not present during Monday’s conference call.

“I’ll have her get a report done,” said Smith, while noting that he was hoping to get more feedback from the contestants.

“I was hoping the survey would do that but I got a lot of calls and they were saying they didn’t know how to do the survey,” Smith said. “They told me that I would rather call you and some spoke about having it and some spoke of not having it.”

From what he’s heard, Smith said there is a mixture of respondents with the younger generation favoring a qualifier rodeo while the older generation wants to wait until next year.

For those diehard contestants, Holyan-Jackson said, there are other options for them to get qualified for the INFR in the event that the NNRA choses not to have a qualifier rodeo.

She said the INFR is proposing to have eight qualifiers through its tour rodeos.

Jackson-Holyan said it’s imperative that the survey results get disseminated once it’s complete.

“I think if you share your survey results that speaks for itself,” she said. “I would encourage you to get your results so that it won’t be like ‘We just wanted to do this’ and have you guys speak for your members.

“Those that didn’t participate is terrible,” she added. “There has to be some accountability. I’ll support you guys however you want to do it.”