‘Tons of champions around’: Naschitti high schooler gets pointers from bevy of champs

The spring portion of the New Mexico High School Rodeo Association will ultimately decide the four qualifiers who will represent the Land of Enchantment at nationals. 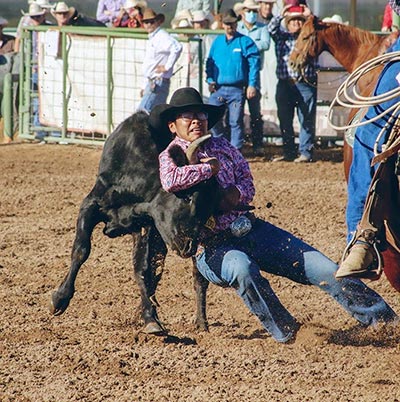 Newcomb senior Dorien Henio is hoping to be in the mix as a first year member of the association.

Henio is from Naschitti, New Mexico, and his parents are Dwayne Henio and Darnell Peshlakai. He has three siblings.

Under the high school association, Henio competes in two events – bull riding and steer wrestling.
Of the two events, the 17-year-old cowboy is making inroads in the bulldogging event as Henio caught 1-of-2 steers at the Landmark #3 High School Rodeo in Mesquite over the weekend.

“I think that’ll be pretty cool, especially for something I just started doing three weeks ago,” Henio said of his exploits in the event.

“I just picked it up and going to nationals would be a huge confidence booster for me,” he said. “I think it’ll be pretty cool if I can get up there and compete with all those big guys.”

As for his bull-riding exploits, Henio said he’s currently in a slump.

“It’s not so good,” he said. “I’m trying to fix these little things here and there.”

Henio’s path towards bulldogging occurred by happenstance when veteran steer wrestler Sheridan Jodie asked Henio to give it a try since he used to compete in the chute-dogging events as a member of the Indian Junior Rodeo Association.

“At our last high school rodeo in Fort Sumner, Sheridan walked up to Dorien and asked him to give it a try,” Dorien’s dad, Dwayne said.

Over the course of three weeks, Dorien said he’s made the trip to Mulholland Well, New Mexico, from his Naschitti home to get lessons, which required him to be on the road for nearly three hours round trip.

“Sheridan is a world champion bull dogger so I’m learning from one of the best,” Dorien said, while noting that he’s also picked up a few pointers from Matt Jodie, Sheridan’s oldest son.

“With what they’re teaching me I think I can have a good spring season next year and make nationals,” he said.

Dwayne said the coaching his son is receiving has been worthwhile.

“I think this is pretty cool that he’s doing this,” the Henio patriarch said. “For Sheridan and Matt to give him that confidence really means a lot. It’s just an awesome feeling to watch him compete.”

That feeling was somewhat amplified during Sunday’s performance when Dorien turned in an 18.52 effort that placed him second in the round.

“I really don’t know what a good steer is yet but it felt like a pretty good steer,” the Naschitti cowboy said, although he did have some trouble of knocking his animal to the ground.

“The first time I tried to throw him he kind of whipped me around,” he said.

But after resetting his feet, Dorien completed the task as he trailed Sunday’s winner, Dillon Mathis, by a mere 1.16.

“It feels pretty good to get my first steer thrown,” he said.

In Saturday’s performance, Dorien got off to a late start from the roping box and as a result he rode by his steer.

“Yesterday I was pretty late and I today I wasn’t,” he said. “That made a big difference.”

With his second place finish, he picked up nine points in the season standings.

“This is a great way to finish off the fall season,” Dorien said. “I’m looking forward to the spring season and with Matt and Sheridan’s help, I hope I can get a lot better and a lot faster.”

“There’s no telling what can happen but I know he can do it,” Dwayne chimed in. “To think about him making nationals puts a lump in my throat. It’ll be awesome for him to go.”

“I go to his house and I can’t be more grateful for Cody helping me out too,” he said.

Like his son, Dwayne appreciates all the help his son is receiving, which includes his own family in the Pine Hill area and Johnyatt Begay, the 4B Bucking Bulls stock contractor.
“He’s got so much support,” his dad said. “It’s one of those things about surrounding yourself with champions. Dorien has tons of champions around him whether it’s from the stock contracting business or the rodeo business. It’s awesome and we wouldn’t be here without there support.”