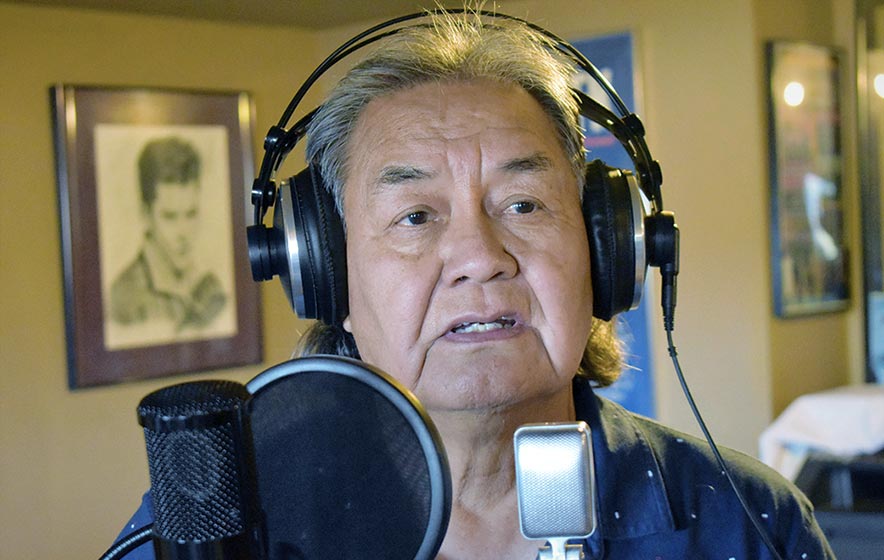 Pineland Records has announced that Razor Saltboy has finished recording his new album which is now in the mixing stage and will be mastered before the release of a compact disc later this fall.

“I’m really excited about this album and the work of love that we put into it, said Saltboy, the stage name for Ray Baldwin Louis. “I hope the songs on the album will touch people,” he said. “Maybe someone somewhere will identify with a story, a message, or the lyrics of one of the songs that it will mean something to that person.”

The album’s title is “Love Me (Now Until Forever)” and has 12 songs all written by Saltboy and inspired by his own experiences, suggestions from people, or something he heard in conversation. Saltboy sings about the joys, trials, and sorrows of reservation life.

His father played guitar and sang one summer night about wanting to go to Montana while under the influence of alcohol. The “girl-daddy” song is about a father going fishing with his little daughter when everybody else is headed to town. A grandmother suggested Saltboy write a song for young present-day veterans who have returned from recent wars and conflicts and are dealing with PTSD.

A young Zuni girl suggested that Saltboy write a song about her people and he painted pictures for listeners with his lyrics. Saltboy handles lead vocals with support from his sons, grandsons and granddaughters and a special appearance by Haylei Redhouse of Tsaile, Arizona.

Aanor Louis, producer and engineer with Perihelion Studio, said, “This album has been a long time coming. We have worked very hard to complete it and we are proud of the final product.”

This will be the fourth album on Pineland Records by Saltboy who is licensed through the American Society of Composers, Authors, and Publishers.