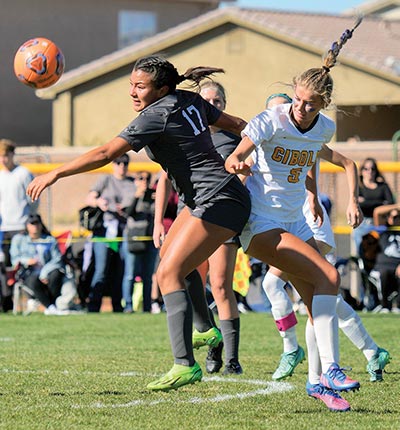 Carissa Benevidez and Lilliana Duncan have a passion for soccer.

The two Diné athletes have been playing for over 10 years. They got their start at 4 years old, and after a few years of learning the fundamentals, they took the sport seriously.

The two have been very involved with club ball, and over the past few seasons, they have been members of the Volcano Vista Lady Hawk varsity program.

“They’re both a coach’s dream,” first-year Volcano Vista coach Ashley Williams-Neider said of the two juniors. “They’re sound players, and I’m just so lucky to have them.”

Last week the Hawks were ousted in the Class 5A state playoffs, losing to district rival Cibola, 2-1, in overtime. The Hawks finished the season at 13-7 overall and 7-2 in District 1-5A play.

“It was an exciting game,” Benevidez said. “I mean, there was huge student sections for both Cibola and Volcano. It was neck-and-neck, and with it going into overtime, it made it more exciting.

“Both teams were really wanting it, so there was constant screaming and running,” she said. “Both teams were taking shot after shot, and I believe we played with all of our hearts to the very end.”

And though they came up short, Duncan said there were many positives to consider.

“In the middle of the season, it kind of got a little rough, but toward the end, we started to pick up our play,” she added. “We ended up as the fourth seed in the state tournament.”

Before the start of the 5A playoffs, both girls were named to the all-district team, with Benevidez making the second team while Duncan made the first team.

“Lillian plays a defensive role, but that didn’t stop her from scoring,” Williams-Neider said. “If I were to give her an award, it would be a breakthrough award because she’s been in the program for three years now, and this year has been her year.”

The Volcano Vista coach said Duncan does what she is asked, and she doesn’t have to worry about her playing her left-wing defender position.

“She just takes care of business, so she just stuck out this year,” Williams-Neider said.

In 20 games played this year, Duncan finished with 10 goals, the second-best on the team.

“I had a really good year,” said Duncan, whose parents are from the Tohatchi area. “I kind of surprised myself scoring 10 goals, and I didn’t expect to score that much, so that was nice.”

Her exploits went beyond that, as she added a career best six assists.

Benevidez also played a critical role for the Volcano Vista squad as the team’s center back.

“As an outside defender, I give a lot of great assists,” said Benevidez, who has family roots in the Fort Defiance area. “I have one of the top assist ratios for my team. Just being on the outside, I’ve definitely got a lot of chances of setting the ball up for the offense.”

“She’s just solid player,” Williams-Neider said of her pupil. “She plays the backline with her best friends, and she’s so hard to beat.” 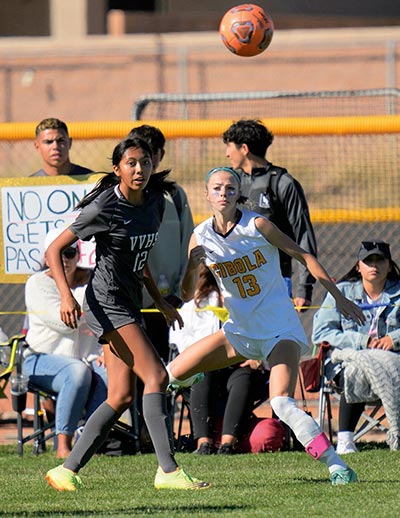 With collegiate ambitions, both players are exploring their options.

On Saturday, Duncan is attending an ID soccer camp at Adams State College in Alamosa, Colorado. An ID camp allows prospective recruits to train with college coaches and create connections for their future.

“It’s a camp to get exposure from other colleges,” said Duncan, who added that she’s seen significant progress in her skills set. “I get to do drills with college coaches, and they get a chance to see me play.”

Benevidez has a couple of colleges looking at her, with Redlands University in California having the most interest in her. Nonetheless, she’s leaning toward attending Fort Lewis College in Durango.

With another year of high school soccer, Williams-Neider believes the sky’s the limit for her two players.

“I believe they can further their education with soccer,” she said. “You know, it’s crazy that I get to have them back next year. They’re going to continue to make a difference and have an impact in my program.”

In addition to the soccer program at her high school, Duncan is also a huge member of the Lady Hawk girls basketball program. She played on the varsity team for the two-time defending state champs.

“We went undefeated last year, so there’s a lot of pressure on us,” she said while noting that last year’s senior class left a legacy at the school.

Two of their graduates were impact players, with Jaelyn Bates and Natalia Chavez now playing for the UNM Lady Lobos.

“We lost a lot of seniors, so we’re going to be young,” Duncan said, “but we’re still a pretty solid team.”

With the club soccer season about to start, Duncan said she would split her time competing in both sports.

“I did that last season,” she said.

When asked about being a dual-sport athlete, she said keeping up with schoolwork has been the most challenging.

“It can be hard sometimes, but I like doing both sports,” she said.

Benevidez competes in one sport, and she will spend her time competing with the Rio Rapids club team this month.

“I’m looking forward to my club season,” she said. “Playing club has given me a huge perspective about soccer. I like playing against other girls from around the country and it’s given me more of a challenge to make myself better.”