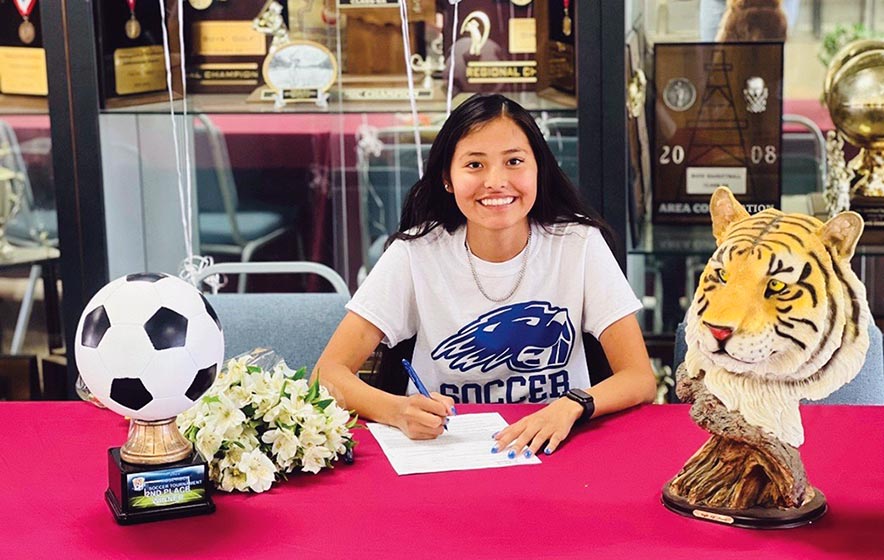 Aalicia Arizona Mitchell has signed her letter of intent to play women’s soccer at Pratt Community College in Pratt, Kansas.

“I’ve been playing soccer for 14 years and I always thought about going to play soccer at a higher level and now I’m able to,” she said.

Originally born in Tolani Lake, Arizona, Mitchell grew up in Ardmore, Oklahoma. Despite the distance, she remained close with her family and the Navajo culture, her grandparents would pray for her in the Navajo tradition. 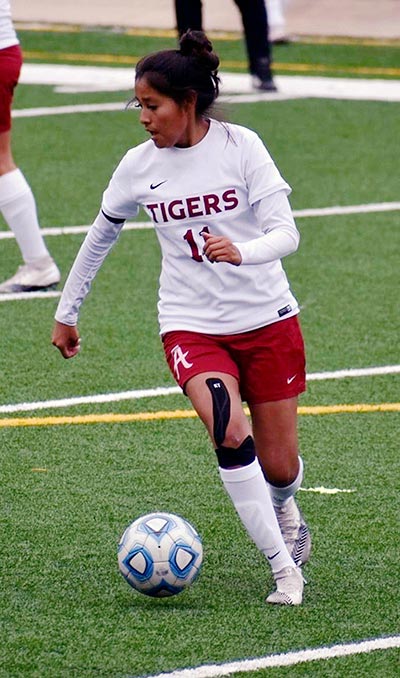 Her legal parents are Kat Mitchell and Lance Williams from Birdsprings, Arizona.

Mitchell’s friends at school would refer to her by her middle name, making her locally known as “Arizona.”

The first time Mitchell took up soccer was when she was in elementary school. She and a friend, Lauren, started kicking the ball to one another and when the boys started saying girls can’t beat them at soccer, they were proven wrong when she and Lauren outran them. From there they started playing for schools and clubs, sometimes taking on three clubs at once and facing a variety of opponents from little kids to 19-year-olds. Playing against such opponents is what she believes helped prepared her for high school.

From there soccer became her passion. She dreams of going professional like her icon Alex Morgan. Watching Morgan play, mixed with her own self-motivation, inspired Mitchell to play her hardest.

“Soccer is really like a family or a chemistry,” Mitchell said. “Especially on and off the field, whenever I’m playing, I’m basically playing with a whole family and it becomes better as you play more together, when you win more games and score more goals.”

Soccer has taught her the importance of good sportsmanship, keeping up with her grades, being a good leader and much more about herself.

She believes her greatest strength is her footwork and her vision on the field, being very technical and tactical on the field.

When she got to Ardmore High, she threw herself into her studies so that she could continue playing. She would usually play center, mid or right wing for the team. The girls soccer program was just starting at the school, often Mitchell would train with the more experience boy’s team to keep her skills up as the girl’s team found their footing.

She would earn school achievements and apart of academic groups like the National Honors Society, the Fellowship of Christian Athletes and the Next College Student Athlete network.

The past two years though were challenging with the onset of the COVID-19 pandemic. Schools were briefly shut down and Mitchell said it was difficult studying chemistry and calculus from home, but she was able to persevere and maintain her grades.

Gyms and soccer fields were closed, but Mitchell use home equipment to stay in shape and kept her skills sharp by teaching her little brother how to play.

When the school reopened last year, Mitchell was ready to go, but the team was uncoordinated and they had to relearn how to work together.

However these setbacks didn’t stop them from qualifying for state though, making history for the school. She also earned All-District honorable mention in her freshman year, sophomore year and junior year.

The awards for this season have not been announced.

In her final year the team lost their chance to go to the playoffs by one point, but with her scholarship Mitchell will be able to continue playing.

She plans to study pre-physical therapy and athletic training.

Although she is nervous to be on her own, hours away from home, she is excited to begin the next step in her journey in both education and in soccer. She already met the coach and soccer team and feels like they’ll work well together.

“I’d like to thank my whole family,” Mitchell said. “Especially my mom, and my grandparents, my sister and my brother, for believing in me and pushing me into that next level and getting me places where I need to be, getting me stuff I need for soccer. That really meant a lot.”