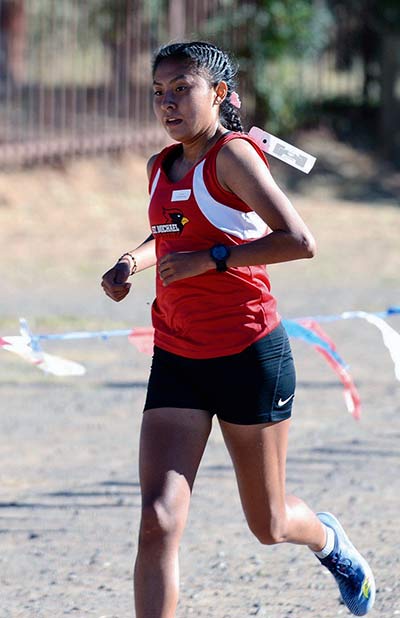 The St. Michael Lady Cardinals continued their push toward defending their Arizona state title this past weekend with a strong performance at the Curtis Williams Invitational at Red Rock Park in Gallup.

“I am happy with how we did,” St. Michael head coach Kelly Bia said. “This was a good race for us.”

That was enough to give the Lady Cardinals the top team score of 40 points, well ahead of second place Kirtland Central, which placed runners in 3, 5, 13, 28 and 30 for 79 points.

St. Michael team leader Ali Upshaw, who has been the team’s consistent top runner for the past three years, won the race with a top time of 19:17, just under a minute ahead of the next runner, Lorianna Piestewa from Miyamura (20:16).

“I feel I ran well,” Upshaw said before echoing Bia: “It was a good race for us.”

Chiara Holgate placed sixth (21:05) and Amber Woody seventh (21:05) to give the Lady Cardinals a good advantage, with Phillips and Phillips rounding out the scoring to give St. Michael the win.

Bia said this race was good for her Lady Cardinals, as it was the first time this year the team has raced in back-to-back weeks.

“We want them to get used to running consecutive weeks,” she said, “because that is what they are going to have to do going into state.”

She said not having a week off will help prepare all of her runners, as the competition only gets tougher from this point on.