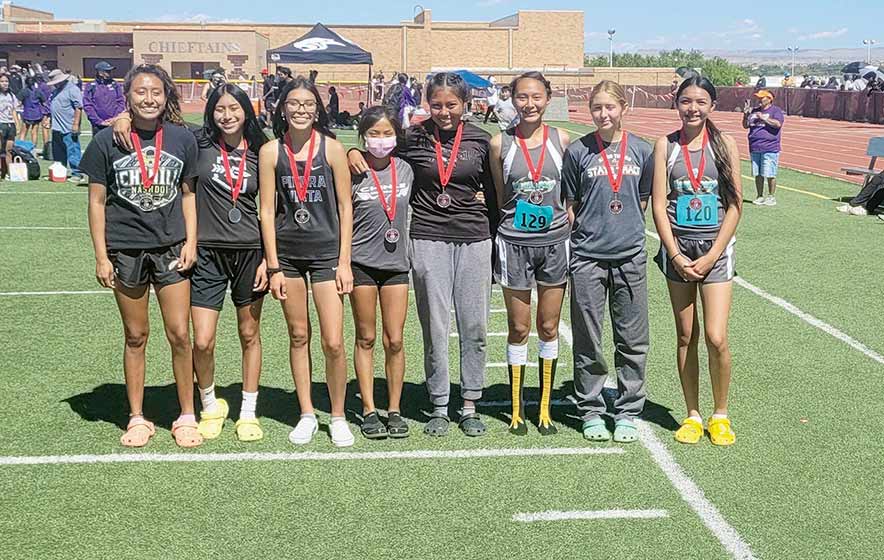 Navajo Times | David Smith
The top 10 finishers in the girls’ varsity race at the Shiprock Chieftain Invite stand together with first-place runner Temyra Bia standing on the far left and in descending order the rest of the top finishers.

The winner for the girls’ varsity race was Chinle High with 27 points, Navajo Prep was second with 74 and Piedra Vista came in third with 105.

“Feels great because all of practice, we’ve just been working for this and it just feels great coming in first,” Temyra said.

Temyra said the course was challenging with a hill to overcome and a steady incline, but the Chinle team practiced and did repeats to prepare.

In the race, she said they were cautious of Kirtland Central’s team, which is one of the top teams in the region, and they pushed themselves to stay ahead.

Temyra feels the team is doing great and on its way to state, having won the last few meets with runners in the top five and top 20.

But overall, she thanks everyone for coming out and all the runners who competed that day.

“All the teams out here did good and you guys all pushed, it was a good race today,” Temyra said.

Tumayah finished with a time of 20:05.01, coming close to overtaking Temyra.

“It feels good,” Tumayah said. “It just feels just like every other race. We just got to run it hard and just finish.”

She thinks her team has what it takes to make the finals this year, but said they aren’t overconfident, that there are still a lot of challenging teams.

Still, Chinle won the meet and she said it’s thanks to their runners who work hard and who will always aim to get their job done.

Pierce of Piedra Vista High was the third-place winner for the girls’ race, she was also the only runner not from Chinle who place in the top five.

“It’s good, I surprised myself,” she said. “I didn’t think I was going to get top three, so it feels good because I actually met one of my goals here, which was to PR. And I did PR by like 35 seconds, so I’m proud of myself.”

She said the Piedra Vista has been preparing for the race by running hills and maintaining pace on inclines.

She tried to catch the top Chinle runners, following the Bia sisters whom she used to help her maintain pace.

She came close to taking second at one point in the race, but the Chinle sisters maintained their speed.

Pierce believes her team did great, with her teammates in the top 10, she thinks they’ll go far in their upcoming races and at state.