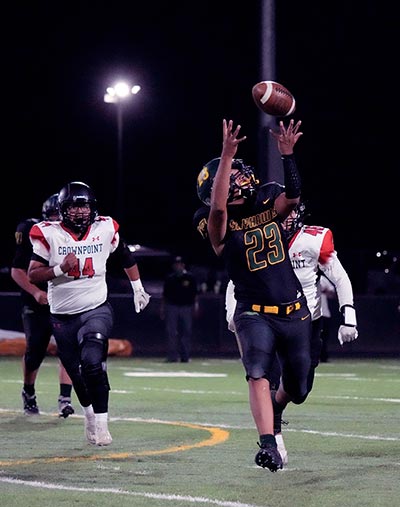 Navajo Times | Donovan Quintero Newcomb Skyhawk Javarius John reaches for the ball against the Crownpoint Eagles on Friday. Newcomb escaped with a 20-16 win.

A late interception by senior Matthew Barber gave Newcomb its third win of the season.

Navajo Times | Donovan Quintero
Newcomb Skyhawk Javarius John reaches for the ball against the Crownpoint Eagles on Friday. Newcomb escaped with a 20-16 win.

The Skyhawks withstood a late drive by Crownpoint as the Eagles got the ball to Newcomb’s 15-yard line.

While facing a fourth-and-4, Crownpoint was looking for the go-ahead score, but Barber’s pick in the end zone earned the Skyhawks a hard-fought 16-14 win on Friday night.

“Our defense has been outstanding,” Newcomb coach Jeremy Wooten said. “We’ve only loss one game against Moriarty, a 4A team, and they’re one of the top five schools in the state, so that’s nothing to sneeze at.”

Wooten said they’ve been able to get the job done against teams that are of their size, as his team sports a 3-1 record heading into Friday’s game at Shiprock.

“It’s good because the boys are working their tails off, especially my senior class, who had a rough year as juniors,” he said. “You know, it just makes me proud that they are able to get that winning feeling back. It’s awesome.”

The Skyhawks led 14-0 in the opening quarter, getting a pair of rushing touchdowns from senior Charlie Benally Jr., and Javarius John.

The Eagles got one of those scores back when senior quarterback Tyrell Archie hit Tydon Tsosie for a 40-yard TD pass. The tandem connected again on the two-point conversion with Crownpoint pulling within 14-8 at the break.

The Eagles added a second TD in the fourth with Mohamed Fakron running in the final 8 yards. The two-point conversion pass from Archie to Taye Harvey gave Crownpoint the lead.

“Crownpoint has a couple of good players,” the Newcomb coach said. “Their quarterback is really good and anytime that No. 10 (Harvey) lined that is where we scouted. Whenever he was a receiver, we knew they were trying to go there.”

“Our defense saw more passing in this game than we had in our first three games combined,” he said. “They’re a good throwing team. Luckily, our defensive coordinator kind of looked at film and we were able to make the right defensive calls and shut them down when it mattered.”

In its final drive, Wooten said his club went 70 yards in a time-consuming drive with Benally finding the end zone for his second TD.

“We were able to go for a long four-, five-minute drive and we punched it in,” he said. “We ended up holding on with our defense.”

The Skyhawks ran for almost 200 yards with John carrying the ball for 97 yards on 21 carries. Benally rushed for 53 yards on 10 carries and Barber had three rushes for 30 yards.

Wooten said the total yards rushed is not where they want to be at, but he was pleased with the team’s defense.

“When we got stagnant on offense our defense stepped it up,” Wooten said. “Our defense just played amazing. We caused four turnovers. We had three interceptions and a fumble recovery, so overall it was a total team win.”

Wooten said being 3-1 overall is not what the team expected, as Newcomb went 2-8 last year.

“The guys have really bought into what we’re teaching them,” he said. “They have really stepped it up and I’m excited for them being 3-1.

“They worked at it and they’ve earned it,” he added. “I hope they’re proud of it.”