‘Closing the gap’: Runner learns he’s not only helping himself to better health 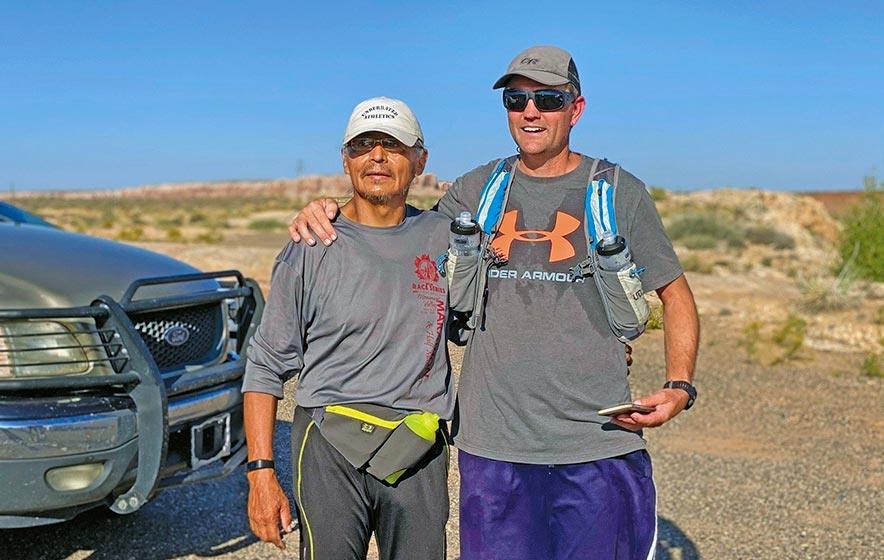 Delbert Dickson is a 57-year-old father of eight from Cahone Mesa, Utah, and recently completed the Fallen Officers 5K/10K/85 Mile Race Challenge, running 85 miles in just three days. And during that time, he found he had helped others — more specifically, families of fallen officers to whom this race is dedicated.

Ironically enough, Delbert never really liked running back when he was younger. True, he was apart of his old high school’s cross-country team, but that was just so that he could spend time with his friends and siblings. It would be years before he started running again, for health reasons mostly.

“Before I started out on this journey, I was overweight, like two hundred and ten pounds and this was about eight years ago,” Delbert recollected. “I started walking half a mile and then one mile, then gradually went to two miles. And then I entered a 5K and this is the very first time I heard of the Shiprock Marathon and I entered the 5K run.

“I just wanted to shed some pounds and get in shape because my knees were aching twenty-four-seven,” Delbert continued. “And so, I started all this and gradually from my 5K, within two weeks I ran a half-marathon.”

Three years afterward, he ran his first marathon, the Warrior Run in Kayenta, a race that took him years to prepare for. Despite that preparation time though, it was one of the toughest races he had ever done. He finished at six hours and 33 minutes. Then, to see if he could do it again, he signed up for the Shiprock Marathon that was just a month away. In that race he finished in five hours and 30 minutes, shedding almost a whole hour off of his first marathon time.

After that he spent years running different races whenever possible, such as the Shiprock Marathon and the Navajo Code Talker 10K and 25K runs usually held in Window Rock. He finds each run enjoyable as it relieves him of stress and gives him time to think and pray.

“Going through this process I always remember my elders; my grandfather and my grandmother would say, ‘Run in the morning, always run in the morning before the sun comes up,’ and that always fueled a fire in my heart that I’d still be doing this,” Delbert said. “I never would have dreamed of running an eighty-five-mile challenge.”

That’s what Delbert is usually on the lookout for: the next challenge so that he can show that it is possible for him, as well as others, to do it. His last challenge was back in February when he ran the 50-mile Monument Valley Ultra. With the ongoing pandemic he has been focusing mostly on virtual runs as they’re the only options left open for him.

“All the runs in this area has been virtual and you run alone, but I enjoy it though. This pandemic is just another thing that we have to overcome,” Delbert said.

Delbert works as the administrator assistant at Utah Navajo Health System Monument Valley Clinic in Monument Valley, Utah. It was at work he was approached by a coworker and was shown a flyer for the Fallen Officers Race Challenge. His next challenge had arrived.

According to the online site, runners have the option of running 5K, 10K or 85-mile races. Eighty-five is the reported average number of police officers who are killed each year and is why 85 miles is an option. Not only would this be a challenge, but Delbert also thought this would be a good way to honor those who have served.

“Ever since then I been running half-marathons and full marathons, running in the morning, then work, then during break, just to work on my endurance, and I had to prepare myself physically and mentally,” he said. “My endurance had to be touch notch. ”

Race day was Sept. 25 and he already had picked out his route. At 5 that morning, right at dawn, he began his race in the chilly air near Monument Valley Utah. Some of his coworkers ran with him, but only for about six miles. He ended his day on the east side of Comb Ridge close to Bluff, Utah, having run 36 miles.

“There’s a lot of mental strength and especially the mental part that I needed to prepare and also through this running it prepared me to physically adapt to what I’m doing, and running through the hot weather was one of the things I needed to overcome,” Delbert said. “I had to listen to my body too, but I prepared this. You have to go through all these pains and aches and a lot of thinking and prayers, and that’s what kept me going.”

On Sept. 26 he started once again at the spot he stopped at the day before, but an hour later at 6 a.m. He ran through Bluff, then along Highway 191 North toward White Mesa, Utah, home of the Ute Mountain Utes. At the foot of a hill he turned on road that led to a mesa that he crossed before stopping at Hatch, Utah, ending his second day at 36 miles.

On the last day, Sept. 27, he began at 8 a.m., ran up another mesa and ended his race at Montezuma Creek after running 13 miles.

“In doing this I had a lot of support from my kids and sisters and my dad who all pitched in,” Delbert said. “They all ran with me. They even biked, and runners that I know and coworkers that I know within the organization of the Utah health system, they run with me and donated water, Gatorade and snacks for other runners.”

A highlight of the race was when Delbert ran with his boss, the CEO of the Utah Navajo Health System Michael Gibson, and public health nurse Shaun Begay.

“In doing this it was a challenge and it was a personal challenge for me, but other people who knew of this run, they either (called me) or just came up to me and said that this run that I made is a healing process for them because they had a fallen officer in their family,” Delbert said.

“This is just one of the things that I probably overlooked, but this running, it’s like closing a chapter and opening a new chapter for them. The healing process and the prayers that they have — I think the whole thing is a healing process for them, closing the gap.”

Delbert was more than happy to help these families feel closure and feels his running is having a positive impact on others as well as himself. For Delbert, he said it was a good run, a good challenge, and now he is preparing for the next run, which will probably be the 50K at the Navajo Mountain Ultra Marathon, which will be held virtually this year.

It has been a long journey for Delbert, one that he hopes to continue as this race had showed him that there are still things he can learn about himself.

“At the end I surprised myself by sprinting the whole 150 meters away from where I wanted to finish,” Delbert said. “So, I told my kids ‘I need you to finish strong,’ and in doing that I sprinted in.”

He hopes that his children and other people as well, will find the strength and the endurance to run and live a positive, healthy life style.

Delbert extends his thanks of support/donation to UNHS, Underrated Athletics, Mario Platero and family, Darlene Sayitsitty, Ernie and Merilene Gee, Gloria Todacheenie and family, Martin Yellowman and family, Sharon Jay and family, Mathew and Sheryl Balwin, Lorissa Jackson and family, Dickson family (Derica, Derick, Joni, Harper, Adrian, Craig,Yolynbah, Sheldon, Kristy, Dylan, Thomas and Allison). Some of Delbert’s family and grandchildren ran with him, some ran virtually with him as far away as Eugene, Oregon. Delbert always enjoyed running with his friends and family and they are his source of inspiration for the past eight years.

“So hopefully this story will inspire some other people too,” he said.