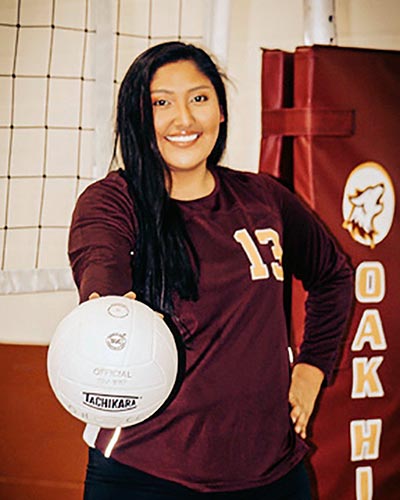 The season is young, but already Arianna Lee has made an impact for the Oak Hills Christian College (Minnesota) volleyball team.

The tallest on the squad, the 6-foot-1 freshman out of Kirtland Central High School has been an outside and middle hitter for the 1-4 Wolfpack.

As of Tuesday, Lee was the team’s only player to rank among National Christian College Athletic Association Division II statistical leaders. She ranked fourth in service aces per set.

Attacking from the middle and outside has not been difficult for her. “I have had to adjust to the ball from different angles on the court,” she said.

She has been working to get her timing right, especially because she is adjusting to two setters, “an everyday grind,” according to Miller.

She even has been receiving sets from the back row. “When she has good timing, she’s going to put the ball down,” he said. “She’s having to make adjustments in the air.”

The height and pace of sets from the setters are different, she said. “I like my hits to be on the net and really quick,” said Lee, who led the team with eight kills and 10 digs against Maranatha Baptist University. “Running to the outside, it gets you being pushed out farther on the court.”

Her hitting percentage has been up and down, though she has been able to raise it of late. Miller said it’s a matter of “swinging her wrist and getting the ball down” to avoid the out-of-bounds errors to which she has been susceptible.

“She loves to try the back corner,” he said. “We’re trying to get her to hit the line sometimes.”

Lee had a season-high .294 hitting percentage during the win in the fifth match, when she finished with eight kills, seven digs and three aces.

And in the third match of the season, she posted a triple double. She led the team with 11 kills, 19 digs and 10 service aces. Her .150 hitting percentage that match was second-best on the squad.

The 10 aces tied for the most in a five-set match and tied for second most in a match among NCCAA Division II players as of Tuesday. “I was looking for the open spots,” she said. “I was looking to serve it really hard so they couldn’t get it.”

She has an effective low serve from a standing position. “She has so much power on it without having to jump (serve),” the coach said.