For those who couldn’t be here: Handful of rez schools express pride in representing North 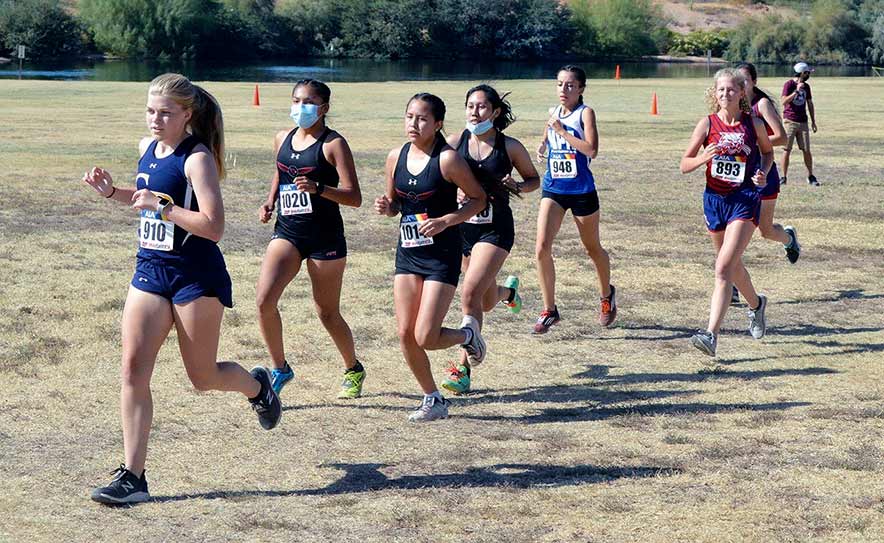 A majority of local schools were unable to compete at the 2020 Arizona state cross-country meet last week in the Valley, but even so, those that did compete found a way to ensure that all reservation schools were represented.

Typically, many of the North teams make a strong showing at the state meet but due to COVID-19, many schools were forced to cancel their entire seasons.

Among those given the go-ahead to compete at the state meet were Page, Winslow, Holbrook and St. Michael, all of which entered only a handful of runners.

The teams sported custom-made T-shirts with the words, “We race for those who can’t” blazed across the back, with a list of many reservation schools including Alchesay, Chinle, Ganado, Many Farms, Monument Valley, Pinon, Red Mesa and Rock Point, to name a few.

“We wanted to acknowledge what was happening with COVID, but we also wanted to do it in a way that showed respect to everyone,” said St. Michael head coach Kelly Upshaw-Bia. “I really felt like we had to remember why we were here – to remember those who couldn’t be here, to remember that we’re very fortunate, and that we have to give everything we can.

“It has been tough for many teams to have to sit out this year,” she said.

St. Michael was the only local school in the Division IV race. The school entered a full girls’ team, but only one male runner.

The St. Michael girls placed 9th overall as a team. The lone male runner, sophomore Kyler Williams, placed 55th in a time of 19:34.

“I am very proud of them,” said Upshaw-Bia of her team. “They ran with their hearts and did the best they could with what training they had under them.”

Like many schools, there was a lot of uncertainty about whether the Cardinals would even have a season. When they received the go-ahead from school administrators, they only had two weeks to prepare for the sectional meet and even then, practice was done virtually.

One week after sectionals, they were stepping to the line to race in the state meet.

“It was really hard to do and with only having three weeks of it, it was tough,” she said. “But I am happy they got a chance to experience the state meet, especially for the seniors.”

It wasn’t even about how well the team did, it was simply about finishing the race, according to Upshaw-Bia.

“Coming into the meet, the team was just grateful and thankful to at least be here and experience the state meet,” she added. “Many schools are starting to close again, and they ran for each other, they ran for their families, their school, and for all the runners that couldn’t be here.”

“I am so proud of the team,” Holgate said. “We knew we had to leave it all out there and give it our best. It was heartbreaking when they canceled fall sports and we thought that it was it. It was hard to get back into the mindset of racing again, but we bounced back pretty quick.

“We knew what we needed to do and most of us had done this three times before,” she said of having state meet experience. “We know how to run our own race. We told each other, we know what to do.”

Though intimidated by the more experienced competitors, sophomore Kyler Williams said, “My coach came over to me and reminded me that I wasn’t alone and that even though I was the only one, I did have a team behind me. I am glad they were here to support me. I couldn’t have done it without them.”

In Division III, the Page boys fought to an overall third-place finish, led by seniors Trent Holiday and Rex Martin.

“I am a very proud coach,” said Page head coach Theo Martin. “We were happy to get the team to the state meet and to do a pretty good job, especially given the circumstances of COVID. 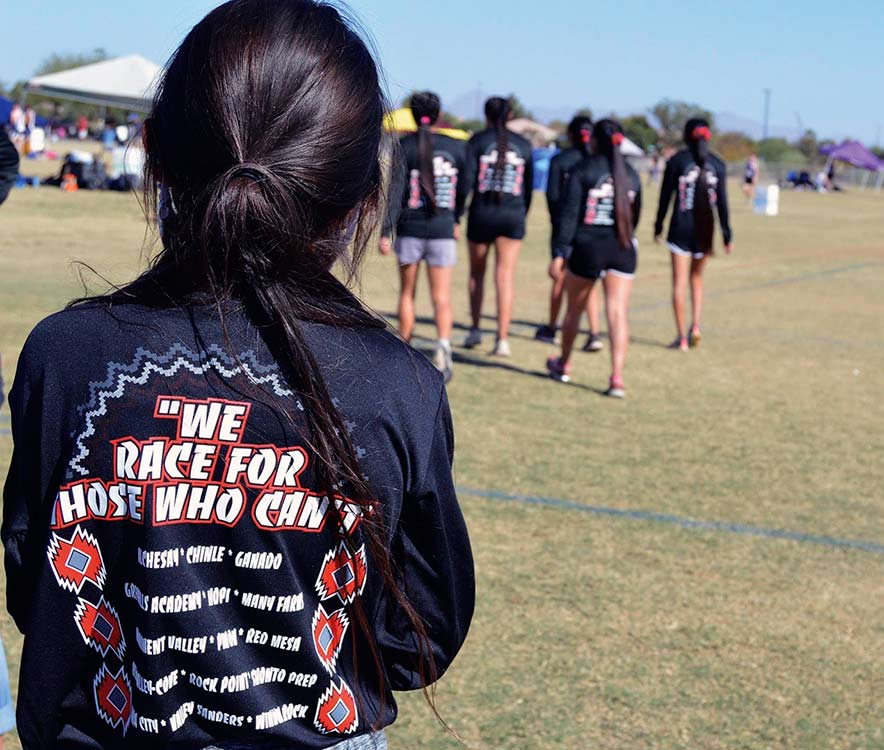 Special to the Times | Candace Begody
The handful of local teams that were allowed to compete at this year’s Arizona state cross-country meet sported custom-made T-shirts with the words, “We race for those who can’t” blazed across the back. The T-shirts included a list of the many reservation schools including Alchesay, Chinle, Ganado, Many Farms, Monument Valley, Pinon, Red Mesa, Rock Point, to name a few, to pay tribute to the local schools that were unable to compete at the state meet.

“They were really sad that they lost but there is no shame, especially what they had to do just to get there,” he said. “I told them after that sometimes you have to lose to come back stronger. I hope they’ll come back for track and summer, and train twice as hard so we can win next year. We do have a strong team coming back.”

Of their third-place finish, Martin said, “I think we represented the North pretty well. We had to overcome a lot of obstacles to do that. They ran well for the amount of training we were able to do together. Some exceeded their expectations, other didn’t feel like they did well.”

Page also sported the custom-made T-shirts, which were designed by other North coaches.

“Some of the other coaches got together and collaborated on that,” Martin said of the T-shirts. “We represented everybody. The team felt like a sense of pride that we were able to do that for the North. It was a responsibility to do as best as we could to represent the Navajo Nation.”

In recalling the race, Martin added that his team was well on their way to a state title halfway through the race.

“The total mileage we were able to put in together was low because of the three-week timeframe we had to work with,” he said. “The younger ones faded in the last mile, but it is still honorable what they did. We were lucky to be there. We are glad just to be given the opportunity to represent Page and the North.”

Representing Holbrook was junior Abigayle Nez, who placed 57th and crossed the finish line in 21:52.