Benally over injury, ready to contribute

A healthy Analyss Benally is ready to contribute on the basketball court.

Last year the Shiprock resident missed most of the San Jose State University women’s basketball season because of an injury. She returns as a fifth-year player who has been in the program longer than any of her teammates.

One of six seniors, the shooting guard played in five games last season and finished with six points. She received a medical redshirt after being diagnosed with a torn labrum in her right, shooting arm.

“I had some shoulder pain from workouts,” Benally said, noting that the doctors weren’t sure how the injury occurred. “We thought maybe it was muscular pain.”

After surgery in January, she rehabbed and trained to get back in playing shape during the March quarantine.

“I’m physically fine. I have full range of motion,” she said. “I’m just happy to be back.”

She begins the season tied for 10th in program history with a .321 three-point field goal percentage and tied for 11th with 120 three-pointers made. 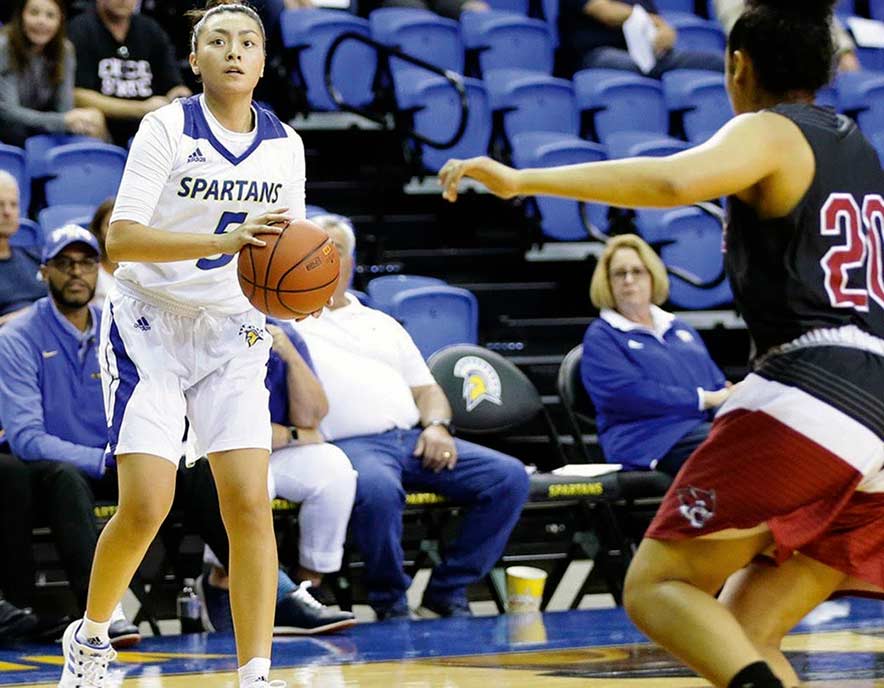 Submitted | San Jose State Athletics
Analyss Benally, who has roots in the Shiprock area, is looking to return to form after recovering from a torn labrum in her right, shooting arm last year.

“Analyss is an incredible shooter that has one of the quickest releases I have seen,” San Jose State head coach Jamie Craighead indicated in an email. “She also has a high IQ and knows our defense really well.”

The 5-foot-7 Benally will try to return to the form of her junior year, when she set career highs in minutes, points, assists, blocks and steals. She averaged a career-best 8.3 points per game and reached double figures in scoring nine times, including a career-high 31 points against San Diego State.

The up-tempo offense is to her liking.

“We’re all about speed and up and down,” she said. “We like to drive down the gut.”

That inside offensive pressure also opens up shots from the perimeter, where she takes most of her shots. She led the team in three-point attempts her sophomore and junior seasons.

She said her shooting has improved because of her ability to better read defenses and determine the best locations from which to shoot.

“Finding my gaps, keeping the defense honest,” she said.

Usually the team plays a zone defense, she said, but when the Spartans play man defense, she typically guards the opponent’s best perimeter shooter.

“Analyss has definitely improved her ability on the defensive end,” Craighead said. “I think sitting out for most of last season and watching the defense has helped her understand it better. We’re excited to see her defend someone other than our own players in practice.”

The season opener is scheduled for Nov. 25.