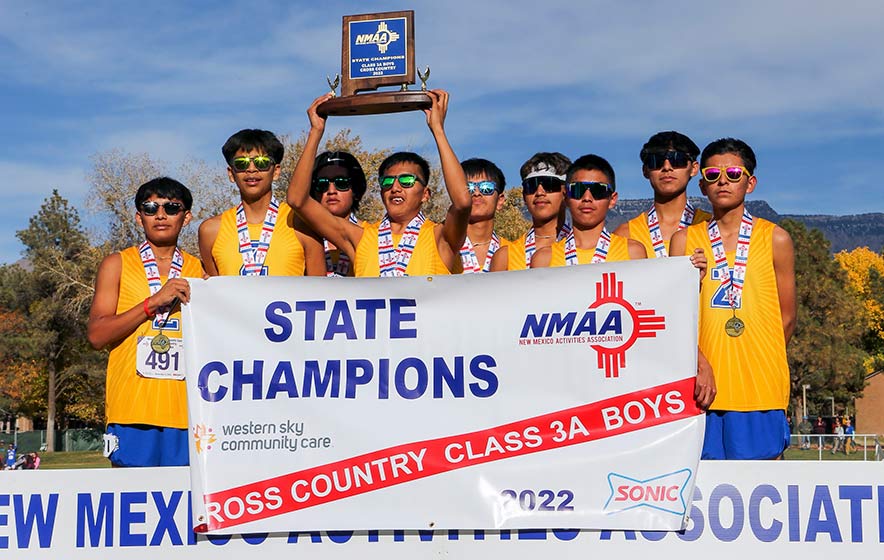 Special to the Times | Delbert Damon
The Zuni T-Birds captured the New Mexico Class 3A state title under longtime coach Chris Carroll. The Zuni coach was named the Times’ Coach of the Year. 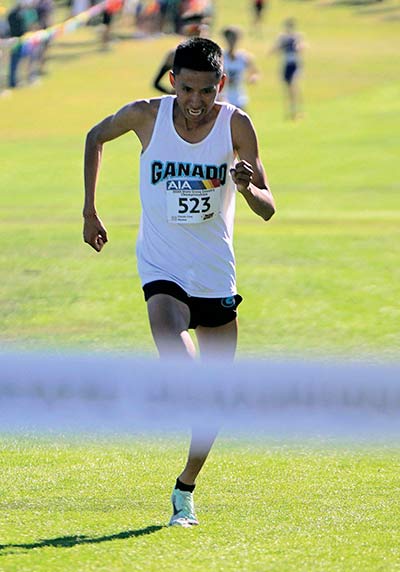 Of all the races he’s won, Ganado harrier Micah Slivers showed how strong his kick is by winning the Arizona Division III state meet.

With that scintillating finish, the Ganado senior was named the Times’ Runner of the Year, and he shares that honor with Navajo Prep’s Devin Lansing.

“I didn’t expect this,” Slivers said. “It’s an honor to be runner of the year, and I couldn’t have done this without my supporters, my family, my coaches, and my teammates. They pushed me throughout the season, and they helped me out along the way.”

Slivers, who has yet to sign, captured six individual crowns this season, which includes the Rio Rancho Jamboree and the Bud Davis Invitational.

“I want to make sure I make the right decision,” Slivers said of his college choice.

At the New Mexico state cross-country meet, Lansing was the area’s top placer as he took second in the Class 3A race, which came down to the wire between three runners.

Only .16 of a second separated all three at the tape.

“I was sick at the Extravaganza, and I was sick at state last year,” said Lansing, who placed fourth at state a year ago despite being sick. “I was pretty good today, bring my A game, so I brought it.”

Lansing said he had a solid start.

“I was trying to conserve,” he said while pointing out he didn’t want to start too fast and then die out later.

“My pace carried me,” he said.

The recipients for coach of the year went to longtime Zuni coach Chris Carroll and Page’s Tim Martin.

“I’m just proud of the boys,” Martin said. “They were picked to win, and they came in and showed that they are the best in D3, so I’m proud of them.”

To complete the team score, the Sand Devils had senior Tanner Dugi in at 22nd, junior Elijah Reed at 33rd, and senior Gavyn Begay at 49th.

“They knew where they had to be,” Martin said of his team’s focus. “We practiced the last couple of weeks running on rolling hills, so I think they were prepared for this.

“They executed perfectly,” he added.

At the 3A state meet, Zuni secured another blue trophy under Carroll.

The T-Birds packed their first four runners in the top 10 to easily capture their latest blue trophy with 35 points. It was more than double state runner-up Cottonwood Classical Prep with 73 points.

The title last month was the school’s 21st.

“It’s an honor being coach of the year, but I also think that it’s not my coach of the year,” Carroll said. “I always like to share my coach to the year with all my coaches. You know, we’re all a team, and there’s years that I have given my award to my assistant coaches because they’re just as important as I am on the field.”

As for their state title, Carroll said the focus this year was learning how to win.

“When we ran in 2021, we were coming off Covid, and we missed a year,” Carroll said. “I noticed the kids were running differently. I felt like last year’s team ran not to lose, and this year we focused on running to win.

“That’s the attitude we had the entire season,” he added. “It was evident at the state championships because we won by a healthy margin.”