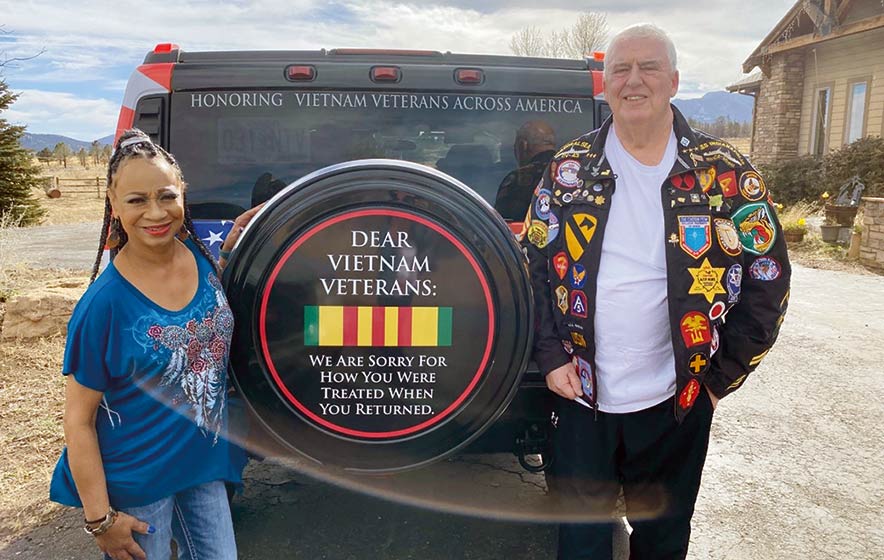 Special to the Times | Geri Hongeva
Malinda and Ken Buckles stand in front of a Hummer for Remembering American Heroes at the Piestewa residence in Flagstaff Nov. 30.

Native American veterans and their families arrived, with the majority being Vietnam veterans. The Marine Corps League Color Guard San Francisco Peaks Detachment 912 presented the colors, followed by the Pledge of Allegiance, and they explained the prisoner of war/MIA table was given. Then Percy Piestewa and her sister, Mary Chris Martin, talked about Terry Piestewa and the blessed life they shared with him and their grandchildren.

Terry did not talk about his time in the U.S. Army or Vietnam like many Vietnam veterans. Percy explained all she could do was to be there for him. She shared the loss of their daughter, Army Spc. Lori Piestewa in March 2003. The Annual Navajo Hopi Honor Ride brought many honor riders, many of who are veterans. Terry especially enjoyed the guests’ company at their homes during the honor run.

In 2001, the Remembering America’s Heroes mission began in Oregon when it developed the Annual Living History Day at Milwaukie High School. The idea was to educate high school students about the sacrifice and service of men and women in uniform. For two decades, RAH traveled throughout 40 different high schools in the state of Oregon.

Native veterans have the highest enlistment in all military branches. In the Vietnam war, over 42,000 Native veterans served, with 90% volunteering and not waiting to be drafted. Native tribes are skilled to be warriors at such a young age, such as hunting, and taught to be survivors, making them the highest percentage in this country, more than any other ethnicity. There here are approximately 140,000 Native veterans currently living. Many have earned the Purple Heart, Bronze Star, and the Congressional Medal of Honor.

Since 2020, 19% of the Native population has served in one of the armed forces. Most Native veterans are very humble and quiet about their service.

A high percentage will never talk about their experience with their families or loved ones. Percy Piestewa mentioned that many veterans’ families do not know how to deal with their PTSD, and their love needs to be there for them. A good percentage of Native veterans continuously go to sweat lodges with their comrades or medicine man, which helps them maintain their mental and physical strength.

“He had PTSD; he had flashbacks; it wasn’t easy. We need to learn to be understanding of those who have served. Thank you so much,” said Percy Piestewa, widow of U.S. Army veteran Terry Piestewa.

Since 2008, Ken Buckles, the executive director of RAH, has begun to expand and honor all cultures. They have included 33 Native American tribes and eight states.

“My mission has been for 27 years,” Buckles said. “I want to teach young people that American men and women of all races have served and still serve. It leads to amazing relationships.”

The Native communities and veterans teach about the culture and the quality of life from their perspective, which all of us should have.

“I’m just so blown away by it, and now we have lifetime friendships. It’s been a blessing,” Buckles said.

U.S. Marine veteran Lupe Velasco, commander of Marine Corps League Color Guard’s San Francisco Peaks Detachment 912, was born and raised in Flagstaff and served in the Vietnam War until he retired in September 1969. Velasco was quiet about his time in the Army for most of his life until 1995 when he attended a reunion in Mississippi.

At the reunion, he shared an emotional story about reuniting with his platoon leader “McCoy” and squad leader “Ernie” from Vietnam. It was very healing for him, and they still stayed connected.

Velasco was invited by Buckles to honor Vietnam veterans as well as to present the colors on this memorable day with four other Marines.

“It is a good event, very good to remember all those guys and say thank you,” Velasco said.

RAH and HVVAA are continuing into Las Vegas, Nevada, and stopping at the MGM Casino as their next destination before returning home to Oregon.

Navajo Vietnam veterans also attended this event with their families, talking and socializing amongst the visitors. Not all may not be ready to talk about their experience but being with family brings healing and joy.

For more information about this non-profit, visit www.rahusa.us.

They will be visiting 28 communities in 45 days to recognize the service and sacrifice of Vietnam veterans and hope to provide some healing along the tour.