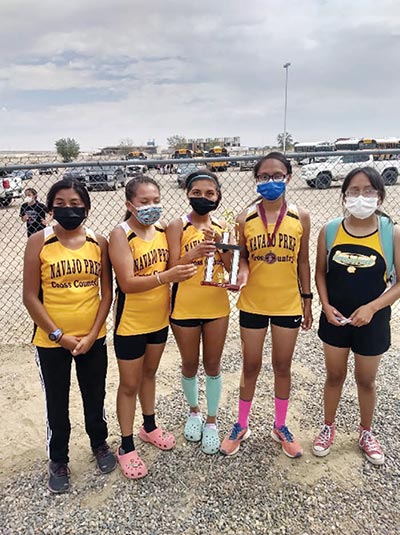 Laila Charley has no recollection of getting on her ATV last July and being involved in a horrific accident.

The then 17-year-old was riding with her younger brother Miles out in the field near their childhood home in Shiprock.

With Laila at the wheels, the pair went cruising on a gravel road and along the curvy roadway she fell off the ATV while making a sharp turn.

Her brother managed to hang on while Laila suffered a traumatic brain injury.

“I don’t remember anything that happened before my injury,” Laila said. “I can’t recall what happened the week before the accident and a month after it happened.”

The harrowing impact fractured Laila’s temporal and occipital bones and as a result she had to undergo emergency surgery at the University of New Mexico Children’s Hospital to stop the bleeding.

She spent three months at UNM and while there she started her long recovery to become one of the area’s top runners on Navajo Prep girls’ cross-country team.

“I think my running is a huge accomplishment because before my injury I really didn’t place that high,” Laila said. “I usually placed in the top 20s and 30s and now I’m in the top 10.”

Earlier this season she placed fourth at the Aztec meet on Sept. 3 and just recently she copped 11th-place honors at the Fighting Chieftains Invitational.

Her running prowess has been somewhat of huge surprise for her parents, Michael and Lilly Charley.

“She was released from UNM at the end of September and not even within a month she wanted to do a 5K run,” Lilly said. “I was worried because she was still working on, you know, on her balance and coordination. It was way too early in her recovery, but she was determined.”

And while she had reservations, Lilly let her daughter take part of the 5K race that was run on Halloween last fall.

She employed her oldest daughter, Mikayla, and the kids’ father to run by Laila’s side.

Of course, Michael couldn’t keep up with the two sisters as Laila finished her race in 40-plus minutes.

Since then, she’s increased her speed, helping the Navajo Prep team to a couple of top finishes.

“I’m hoping to stay on top,” Laila said, adding that she challenges sophomore teammate Nicole Tsosie as Prep’s No. 1 runner.

Running cross-country was a byproduct in Laila’s recovery as she went through rehab in speech, occupational and physical therapy at San Juan Regional Medical Center.

“She had to relearn everything all over again,” Michael said of his daughter. “It was like being a baby again. She had to learn how to walk and talk.”

Michael said it took Laila about two months to start speaking after her accident and it took a little longer for her to start walking.

Initially, she was put into a harness to move her feet and when her legs got stronger she started using a walker.

She then started taking walks with her dad after his shift ended as a local truck driver. The distance they walked varied, depending on how far Laila wanted to go.

“I used to walk with her a mile or two every day,” he said. “We did that to get her legs stronger, but her number one motivation was to get back onto the basketball court.”

As one of Prep’s deadly three-point shooters, Laila helped Navajo Prep win the 2019 state title and this past year her teammates repeated as state champions.

It took months for Laila to get accustomed to shooting the ball.

“When I was in Albuquerque I could barely shoot in front of a goal,” she said. “Now, I can shoot from like a yard from the three-point line.”

And while she still has a desire to play basketball, Laila has taken cross-country more seriously.

“I used to hate running,” she said. “I ran it in elementary and I quit in middle school.”

Instead of running, Laila found different interests in both volleyball and basketball.

Because of her injury, she chose to run cross-country to help her stay in shape for basketball.

“I didn’t do volleyball because I really don’t want to relearn everything like I did with basketball,” Laila said. “That’s why I chose cross-country instead. I’m real satisfied with what I’m doing right now because I’m really successful with it.”

Michael said they don’t want to get ahead of themselves, but Laila could possibly get an offer to run collegiately.

“I told her that she could get one but it’s still too early,” he said.

Nonetheless, he’s inspired with how much she’s overcome since her traumatic brain injury.

“She’s been through a lot and it’s just crazy with how far she’s come,” he said. “She has put a lot into her rehab and she’s the most determined person I’ve ever met.”

“She’s come a long way,” Lilly said of her daughter. “A year ago, she was still at UNM and now she’s running for her high school team.

“We’ve come across people who have heard her about her story, and they’re surprised with where she’s at,” she added. “For me, she’s always been determined, and she just pushes herself. She’s always been like that.”