Tsabetsaye was hired last spring after coaching at nearby JFK Middle School the previous year. 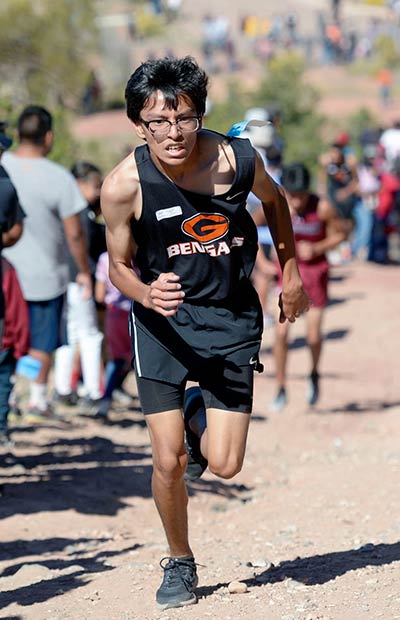 “My expectation this year is to have the kids perform the best way they can,” Tsabetsaye said. “I know there are a lot of restrictions, a lot of hesitations, a lot of fear and a lot of uncertainty so I’m trying to not bring in any added pressure.

“I want them to have fun and I’m going to prepare them the best way I can and together we’re going to build from race to race,” he added.

Tsabetsaye acknowledges that his group will have to adjust to his philosophy but at the end of the day they all have a common goal.

“I’m bringing in a new culture and a new training approach,” he said. “It’s going to be difficult to make those adjustments but at the same time they have an understanding of what direction I want to take this team.”

To get there, Tsabetsaye is going to provide his expertise, as he was the 1992 New Mexico Class 3A state champ while running for Zuni High before earning a national title at SIPI under coach Michael Daney.

“I understand what it takes to win and like I’ve told my kids I’m only one piece of the puzzle,” he said. “A majority of it is going to come from them. They’re going to be the larger piece because I can’t run for them. I can definitely prepare them and moving forward I want them to go out there and give it 100 percent each and every week.”

With the school earning 32 state titles, including 18 for boys, Tsabetsaye said he would like to add to that total. Most of those championships came during the Curtis Williams era. The legendary coach stepped down in 2003 after coaching the Bengals for 21 years.

And while the community hungers for another state title with the last one coming in 2007, the new Gallup coach said it’s unfair to place those high expectations on his current group.

“There’s been a tradition of winning here in Gallup but I don’t want to put that pressure on them,” he said. “From Day One, I’ve told them they have the talent and opportunity to win state and win individual accolades. We’re just going to strive on those things in our own way.”

And while he wants to instill a new tradition, Tsabetsaye said he would like his runners to find a deep love for running.

The official start of the season is set for Oct. 5 but for the past couple of weeks Tsabetsaye has been working with a handful of runners for preseason workouts.

According to the coach, they are allowed to practice 7.5 hours a week during the preseason with some stipulations put in place by the New Mexico Activities Association as a way to limit the spread of the COVID-19.

“We have to abide by the NMAA guidelines so we’re working in pods of five,” he said. “We have set up our practices with a socially distance approach. We’re six feet apart and they are wearing masks and running in masks.”

With an average of 18 individuals that come out for practice, Tsabetsaye said they have staggered start times for each group.

“One group will be delayed 15, 20 minutes on our course,” he said. “We’re taking these guidelines into consideration and as a coach my No. 1 concern is safety, whether we’re in a pandemic or not.”

Due to the pandemic, Tsabetsaye said he’s witnessed some uneasiness among his runners early on.

“There’s just a lot of uncertainty and some hesitation but these kids need an outlet,” he said. “They need an outlet to process the emotions and thoughts they might have, especially with the losses they’ve gone through with COVID.

“We all have been hit hard by it, from immediate family to extended family,” he added. “We all know somebody that has lost their lives to COVID and, of course, that’s in the back of their minds. I think it’s important that the kids need to connect because it gives them a sense of normalcy.”

Despite a few seniors on his boys’ squad, Tsabetsaye said he’s working with a young team. The returners include Riley Begay, Quentin Richards, Caleb Barney and Josiah Livingston with Begay being the only state qualifier last season.

“I have a couple of freshmen that are very hungry,” he said of Kendon Augare-Dea and Theodore Roundface. “They’re in the top mix, pushing those upperclassmen.”

Tsabetsaye added that underclassmen Thomas Eriacho and Demetri Tsosie are making strides at improving their times.

“I’m very optimistic and hopeful about the direction of the program,” Tsabetsaye said. “We have some returning seniors and I’m pretty excited about the season. I’m truly blessed and humbled to be a part of this program and hopefully we can keep the tradition alive moving forward.”

With the season schedule still being finalized Tsabetsaye said his group is going to be running in seven regular season meets, including the school’s Curtis Williams Invitational.

“We have 20 teams confirmed, and that’s my limit,” he said, while adding that the meet will have staggered start times to abide by the 100-person rule set by the NMAA.

“It’s going to be very different this year,” he said.

Tentatively, he’s looking to have the varsity races take place on Oct. 31 while the JV and C team will run their race on Oct. 28. And with Red Rock State Park closed all of the races will take place at Rehoboth Christian School.

“They were very gracious to open up their facilities for us to use,” Tsabetsaye said.