Ashlee Ferrari entered college with a history of track and field success. 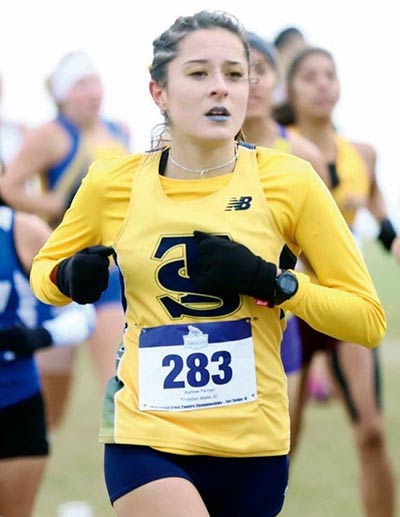 During the fall the sophomore was consistently a strong performer for the women’s cross country team.

“I definitely did not think I would make it this far in cross country,” said Ferrari, who set records in running and field events during high school. “I was very nervous about competing in cross country.”

She cited her belief in the process and coaches for her ability to achieve.

She finished seventh among 17 in the National Junior College Athletic Association Region IX Championship 5K, setting a personal best of 22 minutes, 1.7 seconds. She was fourth among the Trojans.

Two weeks later, she was 57th in a field of 104 and fourth among the team’s entries at the NJCAA Division I national championship 5K

“She ran incredible in those two meets and showed me she has the ability to thrive under pressure,” Trinidad State head women’s cross country coach Lauren Masterson said. “We knew she would thrive more in track. She’s developed into being a really strong cross country runner.”

Ferrari specialized in soccer and track and field during high school. She said getting used to the cross country mileage was an adjustment, noting that she topped at 40 miles a week this fall.

However, she had to learn how to run a 5K.

“I definitely improved a lot more than my first year,” said Ferrari, sixth among 15 in the 2019 regional 5K. “Last year I would always go out faster. I’d end up wasting my energy and not having enough at the end.”

Her strategy this season was to develop and maintain a doable pace. “I try to be within eyesight of my teammates,” she said. “I run with three amazing teammates. They really do help me keep pushing.”

“I see that they’re fighting as much as I am. We’re in the same pain,” she said. “You definitely have to run a 5K a couple times to develop a good pace.”

Masterson said Ferrari’s experience as a sprinter helps as she approaches the finish line, where her kick allows her to race past others.

That was the case at the national championship in Iowa, where Ferrari said the course had a number of hills. “Hills up and a hill down to the finish line,” she said. “I passed quite a few girls during the last two miles.”

Her progress in cross country has changed her perspective. “I really have developed a love for cross country,” she said. “I wouldn’t have wanted it any other way.”

This year she also wants to try the hurdles, for she excelled in the 100 and 300 hurdles during high school.