For the film buff on your last-minute shopping list, a critically acclaimed 1952 film about a Navajo boy in Canyon de Chelly facing almost insurmountable hardships has been released on DVD with a host of extras. 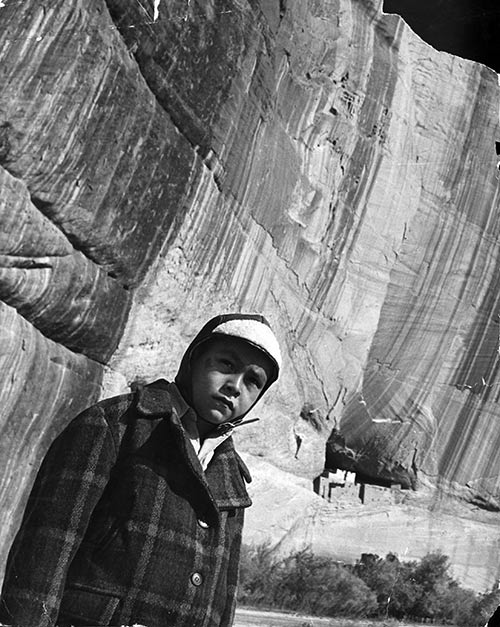 SUBMITTED
Francis Kee Teller, who portrayed the main character in “Navajo,” poses in Canyon de Chelly in the early 1950s. The movie was recently released on DVD with commentary by Teller and other bonus features.

“Navajo” was a low-budget ($30,000) movie with an aging cameraman who had already basically retired, and a 7-year-old star who had never seen a movie, much less acted in one. Nonetheless, it went on to be nominated for two academy awards, and the star, young Francis Kee Teller, received a special Golden Globe for his performance.

According to Kit Parker, who was involved in the film’s preservation and re-release, it has not been available to the public since its release in 1952 except for “poor-quality bootleg versions.”

There’s also a 1952 documentary titled “Our Navajo Neighbors” and a publicity tour with Teller at age 8.

“The special features are extraordinary,” Parker said, adding that any profits from the DVD sales will go to Navajo charities.

The plot synopsis states: “A Navajo boy endures hardship, hunger and the death of his family. He is taken away to attend a white-man boarding school and escapes but is pursued to ancient Navajo caves.”

The producers sought out cinematographer Virgil Miller, who had a reputation for keeping the cameras rolling in adverse conditions, and tracked him down to a camera shop where he was working as a repairman.

“At age 64, Miller took on the challenge of working in freezing cold, with only one camera, a tripod and four reflectors, and came away with an Academy Award nomination and a full spread in the prestigious American Cinematographer,” a press release for the movie reads.

“Despite a shoestring production budget, a threatened ban by the Indian Service, harsh weather and terrain and infighting between the co-producers, the picture went on to earn universal critical acclaim,” the release says.

Parker, a former film librarian, has “a passion of locating and restoring ‘orphan films,’ movies that have been out of sight for decades,” his website says. “It involved a great deal of sleuthing and patience as the original producers and copyright owners were long deceased and the negatives scattered throughout the world.”

Information: “Navajo” is available for $19.95 on amazon.com and other sales platforms. Type “Navajo DVD” into your search engine.