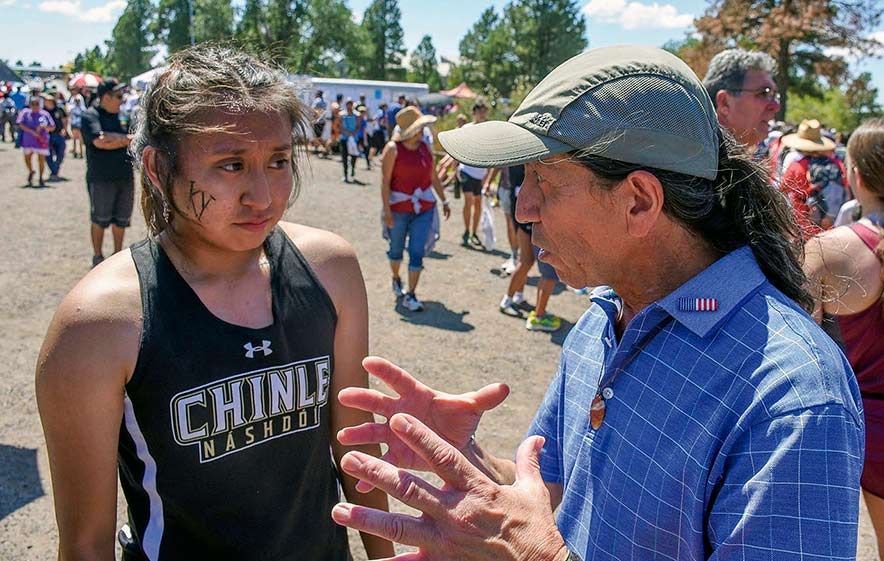 Navajo Times | Krista Allen
George “Geo” Muniz De Lucero, counselor at Chinle High, talks to Temyra Bia after she finished the girls Summit Race, a 5000-meter run, during the Peaks Invitational at Buffalo Park in Flagstaff on Saturday morning. Bia finished fourth with a time of 21:38.10.

Emotions were running high for the Chinle cross-country teams.

Days after losing Kylen Yazzie to a tragic accident, the Wildcats ran with heavy hearts on Saturday at the Peaks Invitational.

Yazzie was a member of the 2021 Chinle team, and he passed away last week. In memory of him, the team had the initials “KY” stamped on their cheeks to commemorate his life.

“I ran this race for my friend, who passed,” sophomore Tumayah Bia said with her voice cracking. “We dedicated this season to Kylen Yazzie.

“These last few days have been hard, but we’re trying to remain strong,” she added. “I just want everybody to be safe out there and spend time with their families.”

Senior Temyra Bia said her thoughts and prayers are with the Yazzie and McCurtain family.

“They’ve been with me since his passing,” she said. “He was like a brother to me, and he was part of this team. I think him leaving hit all of us.

“Everyone says he was a good basketball player, but from our perspective, he was a good runner too,” she added. “I feel like he was a mentor to us.”

The two sisters led the charge for the Lady Wildcats, placing them third in the Summit Race with 91 points.

“We’ve come a long way since the pandemic started,” Chinle co-head coach Brian Begay said. “Of course, we missed that one season two years ago, but I think we have a good shot at state.”

He shares the coaching duties with longtime guru Beatrice Begay (no relation), albeit Beatrice is listed as the girls head coach and Brian as the boys.

“We’re sharing the coaching responsibilities as a whole,” he said. “It’s not me coaching, just the boys and Beatrice taking care of the girls. We’re coming together and putting our heads together so that both teams can succeed.” 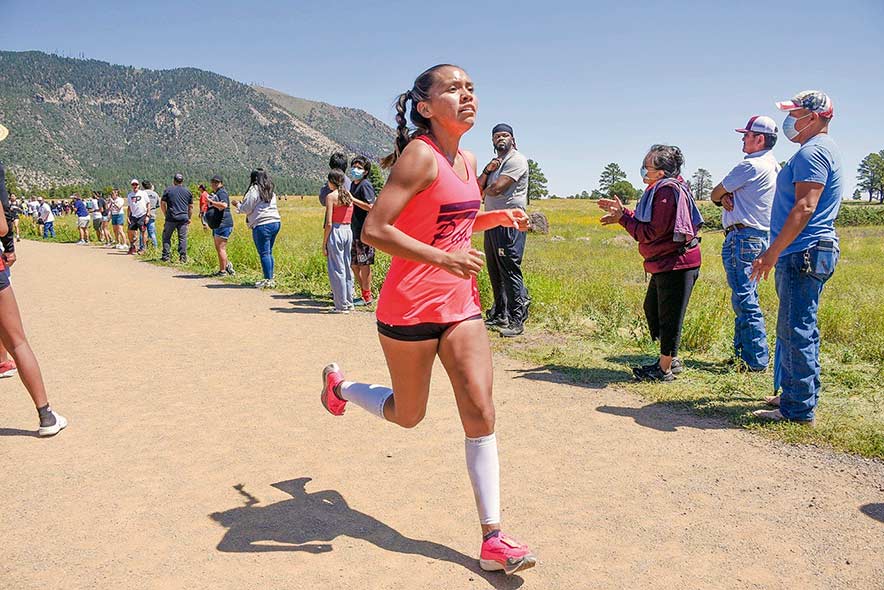 Navajo Times | Krista Allen
Page’s Jade Reid runs toward the finish line in the girls Summit Race, a 5000-meter race, during the Peaks Invitational at Buffalo Park in Flagstaff on Saturday morning.

For its second meet of the season, the Wildcats placed four runners in the top 20 in the elite girls race of the Peaks Invite.

Siblings Temyra and Tumayah headed that effort with a fourth- and sixth-place finish, with the former crossing the finish line at 21:38.1 and the latter in 21:44.5.

The Wildcats also got a 17th place finish from junior Reshila Curley and a 20th place effort from sophomore Janessa Segay.

“I think we did great as a team,” Temyra said. “We have a strong team this year, and we really want to take state. We want to come together and win state for Chinle.”

The two schools finished behind Chinle on Saturday, with Salpointe placing fourth with 107 markers and Coconino in fifth with 122.

Begay said Peaks Invite gave his team a “snapshot” of what the other teams look like.

“Coconino and Salpointe were here,” he said. “As far as region, Page looks pretty good. They look like they’ve been working out.

“We still got work to do,” he said. “It’s still too early in the season to really say what the outcome is going to be. Teams are still getting back into the swing of things.”

Page had one runner short of fielding a team, but they got a strong performance from juniors Jade Reid (fifth) and Alyssa Harris (10th).

“We had a couple of girls up front,” Page coach Tim Martin said. “Some of them had some congestion issues with allergies, and we have some with injury issues, but as soon as we get that worked out, the girls should be strong.”

Reid posted a 21:42.3 effort, finishing between the Bia sisters of Chinle.

“I think I did pretty good for it being my first race,” Reid said. “We were at altitude for this race, so it was kind of hard.”

The Page junior said she used this race as a litmus test to see where she’s at with her training.

“I did a lot of summer workouts so that I can get faster,” she said. “For this race, I wanted to see where I’m at, and I think I’m at a really great place to start with.”

The Summit Race also included the Ganado girls as they took seventh overall. The Lady Hornets were paced by senior Marissa Shorty, who took 27th.

The Patriots got a 12th-place finish from junior Lorianna Piestewa.