Resources at her fingertips: Email leads to electricity connected to 18 homes 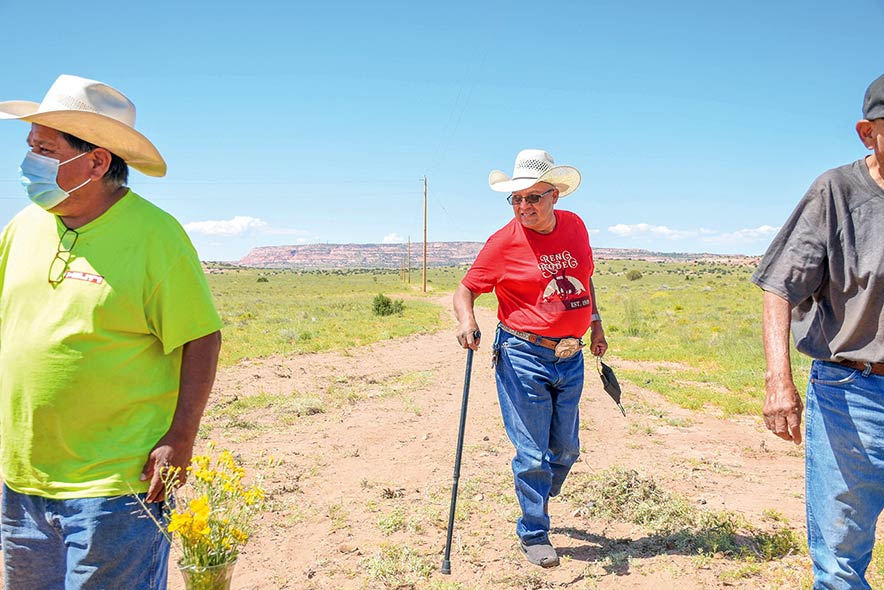 Navajo Times | Krista Allen
Tsé Łichíí Dah ‘Azką́ni residents, from left to right, Ted Shaw, Carson Begay, and Homer Fowler, look at the utility poles that support the overhead power lines running through their community on Friday morning. The poles are posted for 17 miles and connect 18 homes to the grid.

Three elders here waited all their lives for power lines to electrify their homes.

They died over the last 21 months and never experienced the magical power of electricity, said Angelita Nez.

“They never had the opportunity to flip on a light switch,” Nez said during a celebration that paused for a moment of silence outside her mother’s home on Friday morning.

Eighteen families, including Nez’s family, are now connected to the electricity grid.

Now, darkness falls at their convenience.

“We’re very fortunate, appreciative, and thankful for the work everybody has done,” Nez said. 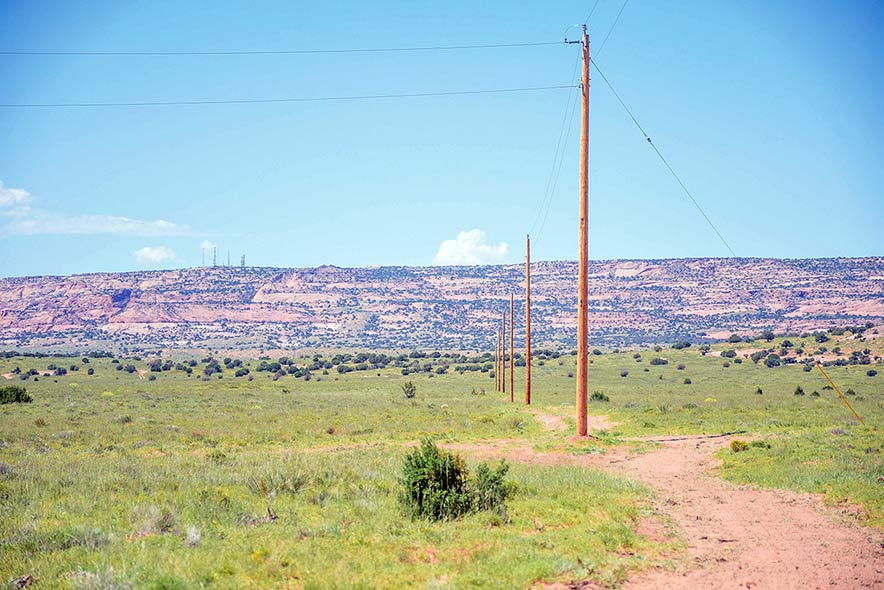 Navajo Times | Krista Allen
The Navajo Tribal Utility’s poles run for 17 miles, connecting 18 homes to the grid, throughout the Tsé Łichíí Dah ‘Azką́ni and the Náshdóíts’ǫǫį areas. Preston Mesa, in the background, sits in Tódích’íi’nii Hóteel.

Nez said the grid is wondrous but getting a powerline here wasn’t an easy feat.

And it all started after she survived the first wave of coronavirus infections and moved home to her mother’s house in Tódích’íi’nii Hóteel.

Nez was in an ICU at a hospital in Phoenix for three months.

“I came home to my mom,” Nez explained. “My employer, Salt River Project, allowed me to work virtually. So, when I came home there was no electricity.

“We (my family and I) bought a generator and electric cords to run the generator to my mom’s, (and) I was able to work from home,” she said.

“I had a Verizon Wireless Jetpack (hotspot device), so I had internet service,” she said. “And these technical capabilities allowed me to continue my employment from here.”

Nez said at one time she questioned why Navajo Tribal Utility Authority hadn’t electrified the area where a powerline was installed from telecommunication towers on top of the nearby Preston Mesa.

She also questioned why residents here were never connected to the grid after the Bennett Freeze was lifted in 2009, and why residents’ grazing land comprised the electrified Preston Mesa.

“So, I started to research,” Nez said. “I event went as far as looking into the Coconino County website and going to the Tuba City Library to read books and articles as to how that came to be.

“I went into my own SRP archives to see how that electricity came to be and how the (Black Mesa and Lake Powell Railroad) was electrified,” she explained. “That research took me to write an email (dated) Nov. 6, 2020, to our dignitaries, President Jonathan Nez, Delegate Paul Begay, (NTUA’s) Rex Kontz and Walter Haase.”

She said in her email, “Good morning. I’m writing to you in tears and hopeful that someday soon my community of Preston Mesa, Arizona, is heard and seen.

“We’ve lived for centuries under the Bennett Freeze with no infrastructure, advancement of any kind, and lack of support and help. In 2002, this was lifted. But to this very moment, our community is still lacking essentials.

“This community is way off the grid – no electricity, no running water. Our roads are unkept and you can’t drive a car to get here in the summertime because you need a four-wheel drive.

“The only attention we get is the back-and-forth commute: the cell towers that bring Wi-Fi and signal to the surrounding area when they (telecommunication workers) go up to Preston Mesa.” 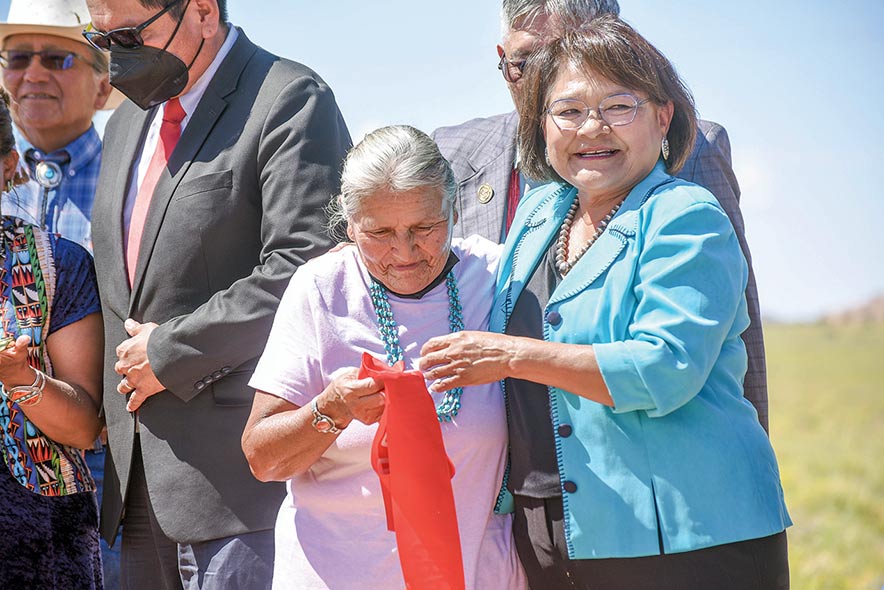 The Bennett Freeze received its name from the late Commissioner of Indian Affairs Robert Bennett who imposed a construction, repair and development prohibition in July 1966 on a 1.5-million-acre area of land in Western Navajo.

Its intent was to force the Diné and Kiis’áanii to settle their differences over the rights to the land.

Years later, federal court decisions reduced the area to about 700,000 acres but the original attempt to coerce the tribes to the negotiating table by then had long been deemed a failure in policy.

Former President Joe Shirley Jr. said in his Jan. 25, 2010, state of the Navajo Nation address, that after 40 years of inactivity and neglect, his administration started to systematically address the rehabilitation and recovery of the Former Bennett Freeze Area.

Shirley said, “The adverse impacts of the Bennett Freeze are tangible and certainly felt by everyone in the area. The effects resulted in extensive substandard and deteriorated housing, deficiencies in infrastructure and public safety and health services.

He continued, “Deteriorating living conditions forced many Navajos to leave their traditional homeland and all opportunities for economic development were abandoned.”

Shirley said the freeze was abolished by U.S. District Court Judge Earl Carroll in December 2006 and Congress repealed the language that created the freeze on April 21, 2009.

Carroll on Dec. 5, 2005, signed a court order to dispose of all claims in the 1934 litigation between both tribes. 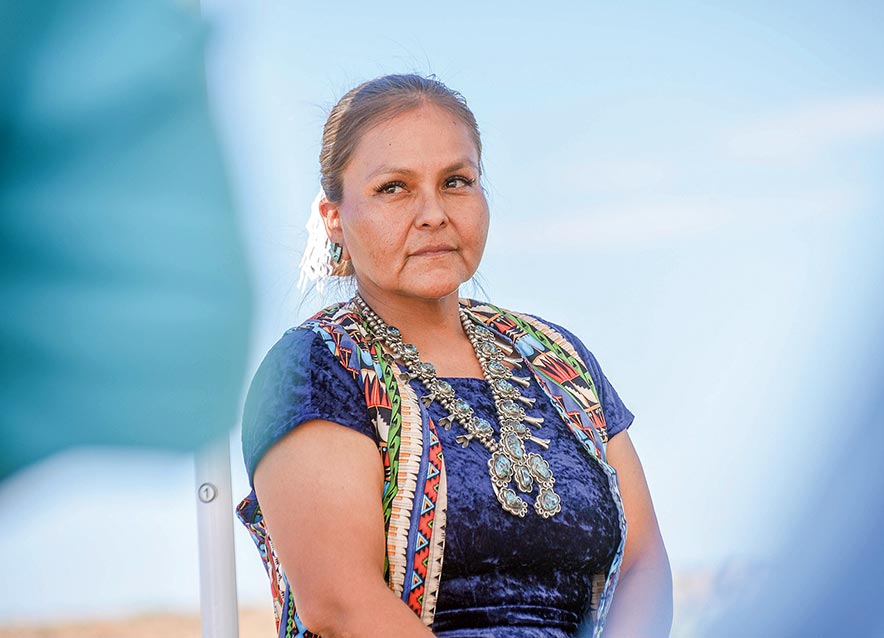 The Navajo Tribal Council approved an intergovernmental agreement the following year, and on May 8, 2009, former President Barack Obama signed a law to forever repeal the Bennett Freeze.

“Not too long ago, money was allocated for relocatees and the Former Bennett Freeze Area and the NPL areas – $15.5 million,” President Jonathan Nez said. “There are a lot more opportunities.”

Angelita Nez, who isn’t related to the president, said shortly after sending the email she received a phone call from Rex Kontz, the deputy general manager for NTUA.

She wasn’t expecting a call from him. Again, she questioned how that happened so fast.

Perhaps it was because her boss, Mike Jones, senior director for strategic risk management for SRP, encouraged her to use the resources at her fingertips.

Jones told her, “You’ve Rex’s and Walter’s email. Why don’t you take that and use that to your advantage?”

Nez said she’s only at the bottom of the company’s organizational food chain but Jones encouraged her to write the email.

“He (Jones) challenged me in every way,” Nez said. “That’s how we’re here today. And I got a response from Rex – I was speechless.”

The families who received electricity say they are excited. Those who received power include Carson Begay and Ted Shaw.