‘A gift from God’: Flagstaff’s Nez leads Eagles to 12-0 record 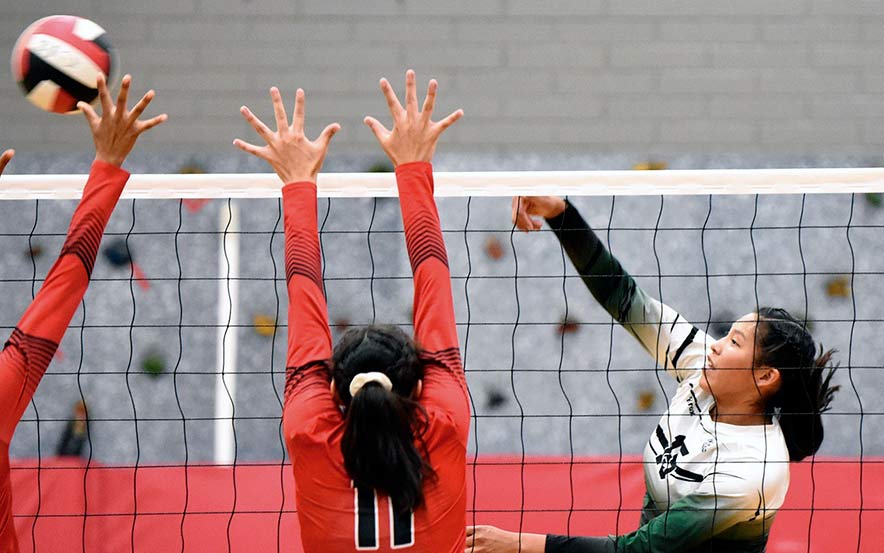 The Flagstaff volleyball team has opened the 2019 season on a winning streak.

Entering Tuesday’s contest with Prescott Valley Bradshaw Mountain, the Lady Eagles have a sparkling 12-0 record, which includes a 3-0 mark the 4A Grand Canyon Region.

Flagstaff is doing this despite returning seven lettermen and only one true starter – sophomore outside hitter Gracelyn Nez – from last season’s Final Four team.

“I never lower my expectations,” Flagstaff coach Beth Haglin said. “We always come in wanting to succeed and we’re always looking to improve.

“Obviously, Gracelyn is a strength,” she said. “She is such a powerhouse but we have to learn to spread the offense. We just can’t depend on her arm because good blocking teams will key on that.”

Nez, who is listed at 5-8, understands that opposing teams will adjust and try to shut her down. Nevertheless, the Eagles have found other options.

“Volleyball is a team sport,” Nez said. “Most of our players were pulled up from the JV squad and so far they’re starting to hit the ball. They’re gaining confidence and that’s good.”

As a freshman last season, Nez put up some monster stats. In 40 games, she led the team in kills by registering 394 kills on 947 attempts for a hitting percentage of .245. At the service line, she put across 133 points that included 29 service aces.

At the net she also registered 28 blocks, including three solos and defensively she added 189 digs in 106 sets played.

With that she was named the 4A Grand Canyon Region Player of the Year.

Haglin said the skills and talent Nez possessed last season were quite remarkable, especially for a freshman player.

In her 35-year tenure, the Flagstaff coach said Nez is one of four players that have made a huge impact on the Eagle volleyball team as a freshman player.

“Gracelyn is a gift from God,” Haglin said. “She’s an amazing player and, of course, she is going to have a great career in volleyball.”

Haglin said most Division I programs want players who are a little taller than Nez but so far she’s making a case at increasing her odds of earning a scholarship.

“If you talk about going off to college, they usually want someone who touches 9-feet, 6-inches but Gracelyn touches 9-8 so she’s up there in her reach,” she said. “If she continues to get smarter and grow as a player in the next two years I think she’s going to be really good for someone in the future.”

Coming into the season, Haglin said Nez has improved her game, especially on the defensive side.

“Last year she didn’t get down as much as we needed her to but I think playing sand volleyball in the spring has made her more comfortable with her defense so this year she’s really embracing that,” Haglin said of her pupil.

“She’s working hard on defense and we need her to do that,” she said. “It’s hard to pull her off the court when she’s in the back row because she’s intelligent. She sees what the other teams are doing. She runs the defense back there with our libero Paetyn (Nakai).”

During last spring’s sand season, Nez and Nakai were partners on the court. Nez said she clicked with her beach-mate after getting to know her when they stayed at the dorms.

“We talked a lot and we became good friends,” she said.

Like her coach says, Nez feels that her defensive productivity has gotten better and she credits the sand season.

“I’m able to see the block and I try to envision where the hitter is going to go with it,” she said. “And with the sand season, it has really helped me to have more ball control.”