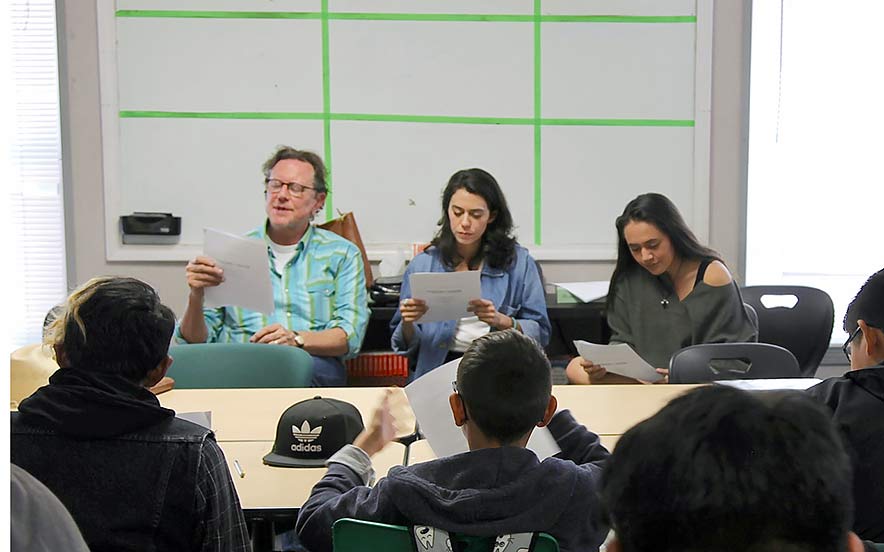 Inspired by his friend John Tsosie, co-founder of Walking the Healing Path, movie and television actor/comedian Judge Reinhold chose to take a stand against domestic and sexual violence and the epidemic of missing and murdered indigenous women.

“We’re just getting started,” said Reinhold. “I want to meet the people working on the front lines and try to raise money for shelters.”

Walking the Healing Path, founded by Tsosie and his father, Ernest D. Tsosie Jr., organizes walks to raise awareness and educate communities about these issues while offering a message of hope for victims and perpetrators who want help. “I walk for my children, in hopes that one day we live in a violence-free community,” said John Tsosie. “I walk so my daughter can grow up not worrying about being hurt. I want that for all of our children. I walk for our future and our people. I want for our people to live healthy.”

When Tsosie and Reinhold met in 2015 when Reinhold was filming “Highly Functional” in New Mexico, Tsosie was already a long-time fan. He had watched the actor in the Beverly Hills Cop movies with Eddie Murphy. When Tsosie shared the mission of WTHP, founded in 2003, Reinhold became interested.

“He said, ‘What you’re doing is amazing. How can I help?’” said Tsosie. Reinhold joined the WTHP campaign at that time. “What motivates me is people who are sincere and authentic and who are ready to dedicate their lives to really moving things forward culturally and behaviorally,” said Reinhold. “I’m talking about the whole deal – civilization evolving and growing into a healthier place and hopefully a more moral place,” he said.

“You need those people to point the way in where we should go.” Reinhold believes Tsosie and his father do just that. “Walking the Healing Path reminds me of one of my favorite Bob Dylan quotes, ‘Those who aren’t busy dying are busy being born,’” said Reinhold. “It means you can’t stand still,” explained Reinhold. “You’re either falling back into the shadows or you’re walking forward. We want to evolve beyond the tragic parts of our culture, the violence.” Recognizing that, Reinhold said he just jumped on the proverbial bus. “I love New Mexico, I love the Navajo,” he said.

“John and I just fell in together and we just decided to do everything we could.” Most recently the two partnered with the Gallup Film Festival where Reinhold previewed a dark comedy he starred in almost 30 years ago called “Over Her Dead Body,” and Tsosie held a Violence Against Women/Children Conference. Proceeds benefited WTHP.

“Over Her Dead Body,” co-starring Elizabeth Perkins, was shot both in Gallup and Santa Fe and brought Reinhold to New Mexico for the first time, he said, which started a whole new chapter in his life. Reinhold believes that the prominence of the missing and murdered Indigenous women issue means “we’re slowly trudging forward in the darkest, most tragic parts of our history and our present. There’s so much that needs to be done.” He says there have to be solutions “beyond the system” or the government. “We can’t expect anybody to come and save us as a society,” he said.

“Each community has to try to figure out its own solutions. People want to help, but they want to be guided. There needs to be structure.” Finding people like the Tsosies who are willing to give their time and devote their lives to making things happen is critical, he said. “It’s easy to be frustrated with the system at large,” he said. “It’s not as easy to say, ‘I want to be part of the solution,’ but it’s so satisfying when you can be a part of something bigger than yourself and help people.”

Tsosie has also been working with filmmaker Ernie Zahn and director Pauly Denetclaw on a documentary called “Walking the Healing Path” and debuted a trailer at the film festival. Denetclaw is also a reporter for the Navajo Times. He says his passion and drive come from a personal experience of growing up with domestic violence, especially in the form of verbal abuse and alcoholism. Tsosie’s mother once pulled him aside as a young boy and told him what was happening in the household was wrong. “She said one should always have respect for women,” Tsosie said. “Never use anger or force against a woman.”

Nevertheless, Tsosie says he ultimately fell into that cycle when he had his own family. “When I did actually use physical force against the mother of my children, it was instantaneous,” said Tsosie. “I acted, and then I flashed back to that little boy sitting with his mother, promising not to act this way. Immediately I knew what I did was absolutely wrong and I was terrified at what I had just become.” Tsosie said he called the police on himself and was arrested and taken to jail.

“I knew I had to take responsibility,” he said. “I think I was just really tired of living that life and I really wanted to make a change. I wanted help.” He and the mother of his children went through the court process and almost had their children removed from the home by the judge, said Tsosie. “I pleaded with her saying what I did was wrong, but ‘Please don’t take the kids away,’” said Tsosie. “’I accept responsibility.’”

The judge ordered anger management and domestic violence education classes. “I’m not proud of that situation or proud of what I did, but I’m definitely proud of what came from it,” said Tsosie. “It taught me a lesson and it woke me up. It shook me to my core. It put this drive in me that I still have to this day.” Tsosie says that although it was a really hard time in his life, he felt like he was reborn, because he knew what he did was wrong and what he had to do to correct it. “Now it’s raising my boys to respect women and always hold women in high regard and never use force against them,” said Tsosie. “Just like what my mom taught me.

“That’s why me and my dad do these walks,” said Tsosie. “We’ve walked over 2,500 miles just to raise awareness about these issues.”  Walking and sharing their story has brought healing to themselves and to others. “This is something we do because we’re passionate about getting that message out,” he said. Tsosie said that when he first started talking about domestic violence, the subject was taboo. “I told my mom, ‘If we don’t start talking about it, how are we going to fix it?’” he said. “’That’s all I’m trying to do. I’m not trying to expose us. I’m just trying to open doors for other people to maybe inspire them and go seek help.’”

Tsosie’s disarming honesty and willingness to share his story sometimes prompts others to do the same. During a speaking engagement he once witnessed a man break down in front of the audience and apologize to his whole family for his abusive behavior. “He said, ‘I’m so sorry. I’ve been holding this in me for 25 years,’” said Tsosie. “Me and my dad, we’re watching,” he said. “It lit my fire.”

It was in that moment that Tsosie knew the work they were doing was helping to change lives. “I want violence to be a thing of the past,” said Tsosie. “I know it’s a hard ask, but I know that if we truly want to change, we can. I’m a strong believer in educating our children. I know because my mom educated me. I knew the minute I did wrong. It triggered me into what I’m doing now.” Cultivating new talent (sub) During their visit to Gallup, Reinhold and his wife Amy visited The Dzil Dit L’ooí School of Empowerment, Action and Perseverance with writer/film director/producer Haroula Rose and actress Kenadi DelaCerna, who were in town for the premier of “Once Upon a River,” a coming of age story that features themes of violence and trauma.

Together, they led a writing workshop for students. Reinhold says we’re in a golden era for television. “All the major writing talent is there now,” he said “The great writing is in TV.” He said with the Netflix moving all of its in-house content to Albuquerque, there is going to be a tremendous amount of production in New Mexico.

For young people interested in getting into film and television, he emphasizes the importance of studying drama first. “You really need a solid foundation of who you are as an actor before you start going after films because the casting directors have a long memory,” he said. He also recommended experimenting with making films. “All you really need is an iPhone and a good writer,” he advised. “Write, direct and learn how to work in front of a camera.” Reinhold said his first role as an actor was during his sophomore year of high school when he was cast as the lead in a comedy.

“I walked out on the stage and it was profound for me,” said Reinhold. It was the moment he realized that he felt more comfortable on stage than he did in real life, he said. “I really felt like I had found where I was supposed to be and I felt really lucky about that,” he said. While he was trained as a dramatic actor, Reinhold says he feels more comfortable with comedy. He believes natural comedians have something “inherently funny” in them that they don’t necessarily have control over. Even when he’s playing a “straight-man” character he’s told he often comes across as hilarious to audiences.

Reinhold says he’s grateful he was able to be a part of the 1980s comedy wave. “I’m so fortunate to have been a part of that era,” he said. “Some of the movies I’ve done have endured because they are genuinely funny. Looking back, I see how important it is for people to laugh.” Today, Reinhold is working on a book called “Confessions of a Hollywood Dork,” full of humorous vignettes from his career. He and his wife, who have homes in New Mexico and Arkansas, are looking to produce films and Reinhold is considering stepping into a few westerns.

He believes the western genre needs a fresh look and to be less derivative of past “cowboys and Indians” films. “It needs to be gritty,” he said. “It needs to kind of reinvent itself in a modern context. It needs some fresh talent.” He said he would like to see more storytelling done from a different perspective. “I would love to see a Navajo language western so that it has all of the elements of a classic western, but it’s Navajo, in the Navajo language, with English subtitles,” he said. “That’s the kind of freshness I mean,” said Reinhold. “It would be a real authentic way to redefine what a western is. Go back to its roots but bring something that’s never been seen before.”