Nenahnezad uses road collapse as an excuse to build back better

If President Biden wants to see an example of building back better, he can come to Nenahnezad.

This chapter along the San Juan River, faced with repairing some dangerous sinkholes in Indian Route 365, went a step further. 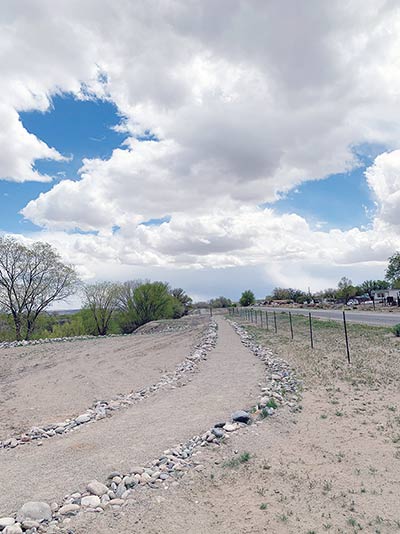 The chapter now has a shady half-mile-long walking loop with a trickling creek, chirping birds and access to one of the Four Corners’ few actual rivers. The cave-ins, said Community Services Coordinator Arthur Bavaro, turned out to be “a blessing in disguise.”

But it took a long time for him to see it that way. The sinkholes were already starting when Bavaro took the job with the chapter in 2003. “I started calling everyone I could think of who might have something to do with this type of problem,” he recalled. “The state, the federal government, the tribe … I almost had to become a pest.”

There were “lots of false starts,” and then in 2008, after Barack Obama took office, Bavaro decided to start over with the circuit of phone calls, thinking the new administration might want to make a good first impression.

That turned out to be the breakthrough. “Somewhere along the line, some people popped in out of nowhere,” he recalled. “They did a seismograph map of the area and it was just honeycombed with these small coal mines.”

Once it was established the culprit was mines, the chapter was able to enlist the aid of the Navajo Nation Abandoned Mine Lands program and their reclamation specialist, Melvin Yazzie, who turned out to be a great advocate for the walking trail.

At first they were going to pump concrete into the mine shafts, Bavaro said, but the area drains from the surrounding highlands into the river, and blocking one drainage would only lead to the water finding its way under the road in another spot.

Also, since it was a riparian area, any fix would have to be cleared with Navajo Fish and Wildlife, the Navajo Environmental Protection Agency and all the other usual regulatory suspects.

Undaunted, the chapter worked through all the clearances and finally, a few years ago, had a project in place. They hired Clawson Construction, a Navajo woman-owned company out of Utah, which set about backfilling the holes.

“They had to build a road to get access to the cave-ins,” Bavaro explained. “One day I was walking down there and I said, ‘You know, this would make a nice river trail.’ “Mr. Clawson, the owner’s husband, thought about it a minute and quietly said, ‘We could do that,’” he said. The project blossomed from there.

Bavaro, who has never been ashamed of asking for help on behalf of his chapter, hit up Navajo Mine for some road base and Arizona Public Service, majority owner of the Four Corners Generating Station, for funding and technical advice.

Suzy Baldwin, government affairs manager for APS, said the project was right up APS’s alley. “APS has been working with the local chapters on diversifying their economy, since we’re planning to close the plant in a few years, and one of the things that has come up at planning workshops is a river trail,” she said. “We were happy to help Nenahnezad get this off the ground so it can be a prototype for the other chapters,” she said. “Wouldn’t it be something to have a river trail from here all the way to Gadiahi?”

Baldwin also helped the chapter connect with Farmington’s River Reach Foundation for some pointers and advice, since the nearby city has already developed a popular river trail. While Clawson was cutting a trail along the river, AML rehabilitated an old trail alongside the road that had been built years ago by the New Mexico Youth Conservation Corps. A steep cliff separates the two trails, so to connect them Clawson built what Bavaro calls the “stairway to heaven,” a steep staircase of railroad ties.

“It’s a workout, running up that thing,” noted Chapter President Norman C. Begaye as he and Bavaro demonstrated. Other features of the trail include a babbling brook (which Bavaro suspects is probably just runoff from a canal, but it’s still nice) and four river access ports that can be used for fishing or put-ins for rafts and kayaks (as long as you can haul them down there; it’s non-motorized access only).

“It’s funny, but even though we live right on the river we never used to see it unless we were driving over the bridge,” Bavaro said. “There’s this steep cliff and a tangle of vegetation you had to cut through to get to the water.”

Fortunately, most of the jungle turned out to be non-native tamarisk and Russian olive, which meant it wasn’t protected and could be bulldozed.

Once the vegetation was removed, AML found six old car bodies that had been pushed over the bank as erosion control, and pulled them all out. The trail is fully usable, starting from a small parking lot at the entrance to the chapter compound and lined with pretty round river rock to mark the way.

But it’s still a work in progress, and will be for some time. A picnic table or two will be set on the high portion of the trail, along with a solar-powered device charger similar to a prototype that’s now in front of the chapter house, designed by Analytical Technology, an incubator company out of San Juan College, and paid for by APS.

Interpretive signs explaining the vegetation, wildlife and thanking the trail’s sponsors are next on the agenda, along with a side-by-side for patrolling the trail. Bavaro is also hoping for a Japanese-style moon bridge over the little creek, which Baldwin thinks she can talk APS into. The final phase will include a small skate park.

“We really need something for the youth to do,” said Bavaro. “I didn’t realize how stressed they were by this whole COVID thing until AML sent a crew down to make a documentary about this project. They were interviewing some kids and one girl said, ‘This is the only place I can go to get out of my house, listen to the birds and de-stress.’”

Like every project, the river walk had its naysayers. “People said, ‘People are just going to go there to party. You’re going to find piles of beer cans before too long,’” Bavaro recalled.
Surprisingly, that hasn’t been the case. “The first few months, I went down every day with a trash bag,” Bavaro said. “I’m happy to say I usually came back with an empty bag.”

Whatever problems the trail brings, Bavaro thinks they’re far offset by the joy it brings the community. “I love to come out here and see people power-walking, families with kids walking their dogs, even Anglos from Farmington have discovered it,” he said. “Everyone on the trail has a smile on their face, which is the whole point.”